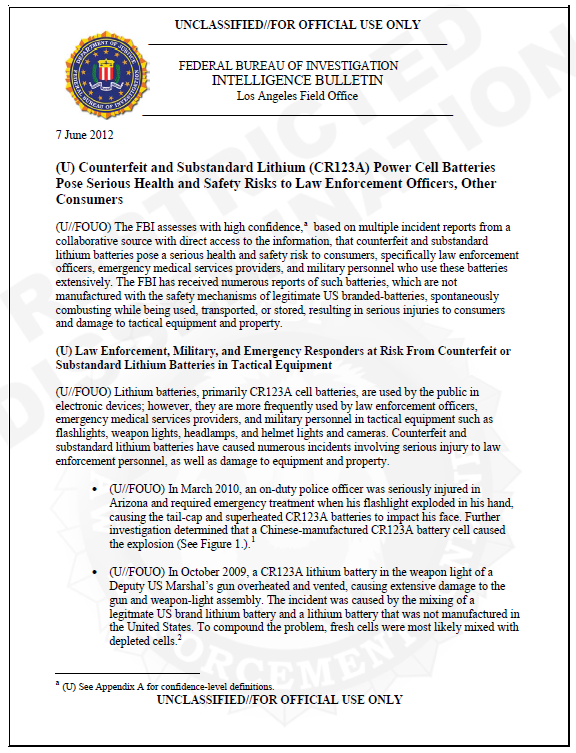 (U//FOUO) The FBI assesses with high confidence, based on multiple incident reports from a collaborative source with direct access to the information, that counterfeit and substandard lithium batteries pose a serious health and safety risk to consumers, specifically law enforcement officers, emergency medical services providers, and military personnel who use these batteries extensively. The FBI has received numerous reports of such batteries, which are not manufactured with the safety mechanisms of legitimate US branded-batteries, spontaneously combusting while being used, transported, or stored, resulting in serious injuries to consumers and damage to tactical equipment and property.

(U) Law Enforcement, Military, and Emergency Responders at Risk From Counterfeit or Substandard Lithium Batteries in Tactical Equipment

(U//FOUO) Lithium batteries, primarily CR123A cell batteries, are used by the public in electronic devices; however, they are more frequently used by law enforcement officers, emergency medical services providers, and military personnel in tactical equipment such as flashlights, weapon lights, headlamps, and helmet lights and cameras. Counterfeit and substandard lithium batteries have caused numerous incidents involving serious injury to law enforcement personnel, as well as damage to equipment and property.

(U//FOUO) Several indicators are associated with counterfeit or substandard lithium batteries; awareness of these indicators can decrease the chances of purchasing inferior batteries that can put users at risk. 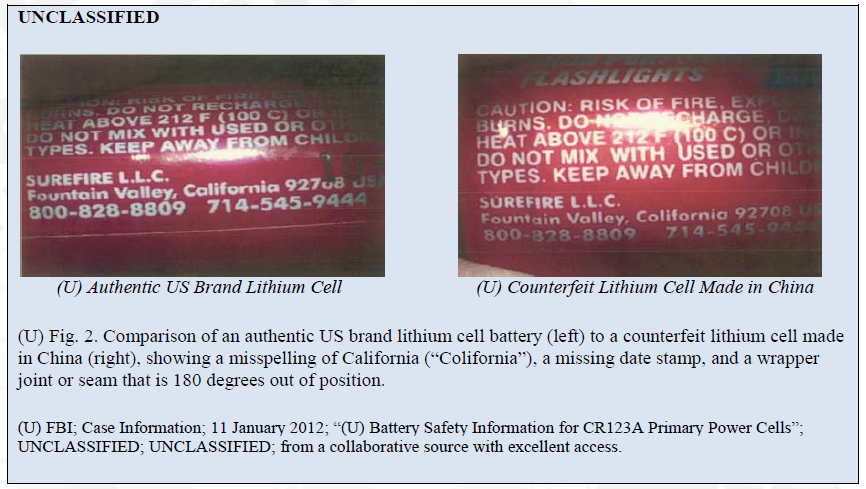 (U//FOUO) The FBI assesses that counterfeit and substandard lithium batteries will continue to pose a health and safety risk to law enforcement officers, military personnel, and emergency medical services personnel, as well as unwitting consumers in the general public, as long as they are available for purchase. Taking the following precautions, however, can reduce the likelihood of user injury or property damage from either the purchase of counterfeit and substandard batteries or the improper use of legitimate lithium batteries.

(U//FOUO) The FBI assesses that in addition to the safety risks, the sale of counterfeit and substandard lithium batteries has a negative economic impact on both users and US manufacturers of legitimate lithium batteries. The widespread use of tactical equipment and electronic devices requiring lithium batteries among law enforcement, emergency medical services providers, and military personnel can lead to significant costs for these agencies if they purchase and then must replace defective batteries, tactical gear and property, or pay for emergency care. US manufacturers lose potential revenue when producers in China and other countries profit from the fraudulent use of US brand holders’ trademarks. In addition, when incidents occur involving what appear to be legitimate US batteries, the brand holder often faces costs in terms of both money spent on testing to determine the cause of the incident and potential erosion in brand confidence among consumers.