(U//FOUO) FBI Bulletin: Potential Use of Exploding Targets as Explosives in IEDs

The following bulletin was released in March by the FBI Terrorist Explosive Device Analytical Center.  The bulletin was first reported on and made public by a writer for Examiner.com who published low quality images of the document.  This version of the bulletin is significantly higher quality and contains renderable text making it easier to read and refer to. 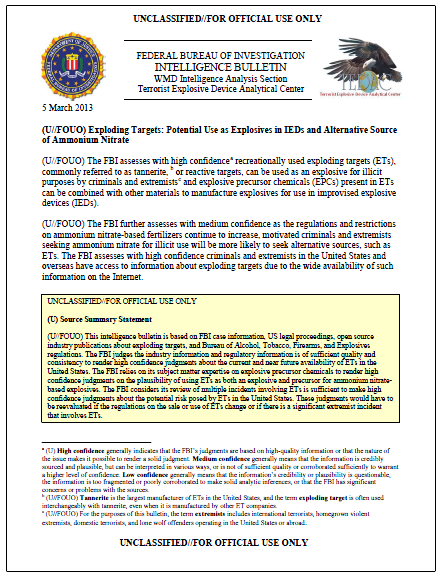 Exploding Targets: Potential Use as Explosives in IEDs and Alternative Source of Ammonium Nitrate

(U//FOUO) The FBI assesses with high confidence recreationally used exploding targets (ETs), commonly referred to as tannerite, or reactive targets, can be used as an explosive for illicit purposes by criminals and extremists and explosive precursor chemicals (EPCs) present in ETs can be combined with other materials to manufacture explosives for use in improvised explosive devices (IEDs).

(U//FOUO) The FBI further assesses with medium confidence as the regulations and restrictions on ammonium nitrate-based fertilizers continue to increase, motivated criminals and extremists seeking ammonium nitrate for illicit use will be more likely to seek alternative sources, such as ETs. The FBI assesses with high confidence criminals and extremists in the United States and overseas have access to information about exploding targets due to the wide availability of such information on the Internet.

(U//FOUO) The FBI assesses with medium confidence criminals and extremists may actively be attempting to acquire ETs to obtain the ammonium nitrate for use in the manufacture of improvised explosives based on FBI investigations of individuals interested in manufacturing explosives. While other methods for illicit acquisition of commercial products containing ammonium nitrate exist, the FBI assesses with medium confidence the use of ETs as a source of ammonium nitrate could represent the latest evolution in tradecraft by which criminals and extremists attempt to circumvent existing regulations based on recent reported incidents of ET acquisition for explosives manufacturing.

(U//FOUO) Currently, ETs contain ammonium nitrate, and their purchase is not regulated to the same degree as ammonium nitrate-containing fertilizers. Alternatively, the personal manufacture of ETs could be used by criminals and extremists as a rationale for purchasing large amounts of ammonium nitrate from retailers.

• (U//FOUO) In April 2012 an identified US person in Washington State, who may have undergone aggressive online radicalization, sustained serious injury after an explosive device detonated prematurely. The device’s main charge consisted of an improvised explosive mixture containing ammonium nitrate, which likely was obtained from ETs purchased online, according to a law enforcement source.

• (U//FOUO) There have been multiple instances in the past three years in which law enforcement officers discovered ETs stored with other explosives and EPCs when executing search warrants at personal residences.

• (U//FOUO) Since 2008 the FBI ammonium nitrate tripwire initiative has detected at least 18 incidents related to attempts to directly purchase ammonium nitrate, allegedly to manufacture ETs, although no nexus to terrorism was immediately apparent.