The following bulletin was released to private industry partners June 5, 2015.  According to an article from Reuters, one of the remote access tools (RAT) described in the bulletin, called Sakula, is directly linked to the hack of the Office of Personnel Management (OPM) that was disclosed earlier this month.  Other publications have directly linked the bulletin to the OPM hack, though have not made the bulletin available publicly. 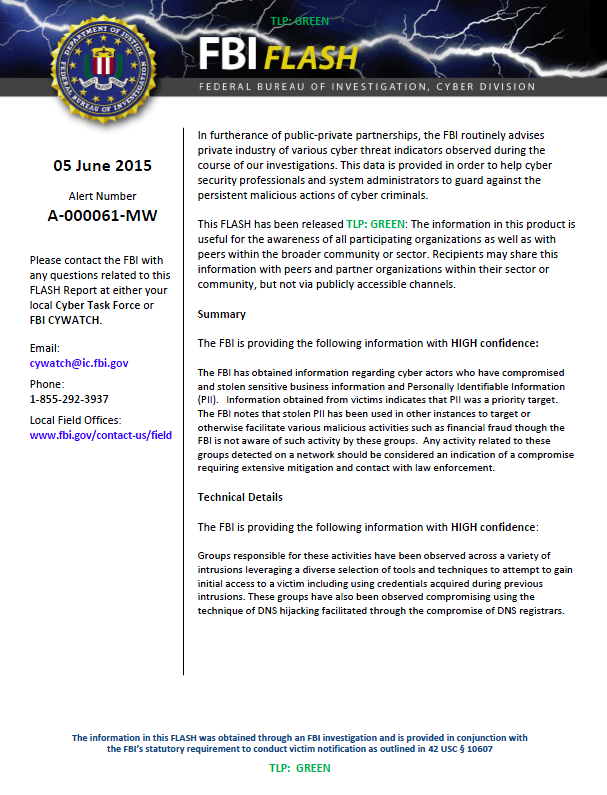 The FBI has obtained information regarding cyber actors who have compromised and stolen sensitive business information and Personally Identifiable Information (PII). Information obtained from victims indicates that PII was a priority target. The FBI notes that stolen PII has been used in other instances to target or otherwise facilitate various malicious activities such as financial fraud though the FBI is not aware of such activity by these groups. Any activity related to these groups detected on a network should be considered an indication of a compromise requiring extensive mitigation and contact with law enforcement.

Groups responsible for these activities have been observed across a variety of intrusions leveraging a diverse selection of tools and techniques to attempt to gain initial access to a victim including using credentials acquired during previous intrusions. These groups have also been observed compromising using the technique of DNS hijacking facilitated through the compromise of DNS registrars.

Following such an exploit, such groups have been observed recently using custom Remote Access Tools (RAT).

Sakula- A RAT that has the capabilities to launch remote command shells, enumerate processes, download files, and beacon to Command and Control (C2) domains. Sakula attempts to send a two-beacon set over TCP port 80 to a configured domain. If the domain is unavailable, it will attempt to connect to a secondary domain over TCP port 80 and 443 using HTTP.

FF RAT- a RAT that has the capabilities to download Trojan DLL files to memory and beacon back to C2 domains and was named based on the unique string “FF-RAT USER” found within the malware. The data sent in the beacon is XOR-encoded using the key 0x27.

Trojan.IsSpace – a RAT that contains multiple files that include a dropper (EWSNH.exe), Trojan (AOFVPMJXVT.exe), privilege escalation tool (SensrSvc2013.exe), and a module used by the tool (SensrSvc2013.dll). This malware is capable of bypassing dyndns categorization by using a proxy through Google AppProxy’s hosted on appspot domains.

Protocol variations in the URI:

Trojan.BLT- a RAT that is executed from its export CreateInstance, the mutex HFRM_ is created and a process instance of cmd.exe is launched to execute the command “ipconfig/all” to collect the victim system’s MAC address. Trojan.BLT will test network connectivity by establishing a connection with a legitimate website. This malware is capable of bypassing dyndns categorization by using a proxy through Google AppProxy’s hosted on appspot domains.