The following FBI report was obtained from the website of the Mississippi Association of Chiefs of Police. 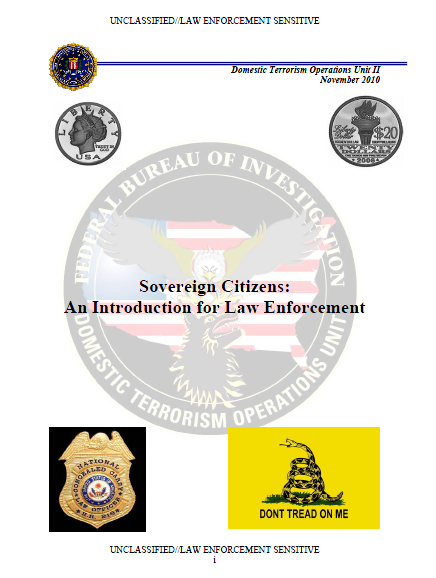 Sovereign citizens believe the government is operating outside of its jurisdiction and generally do not recognize federal, state, or local laws, policies, or governmental regulations. They subscribe to a number of conspiracy theories, including a prevalent theory which states the United States Government (USG) became bankrupt and began using citizens as collateral in trade agreements with foreign governments. They believe secret bank accounts exist at the United States (US) Department of the Treasury. These accounts can be accessed using Internal Revenue Service (IRS), Universal Commercial Code (UCC), and fraudulent financial documents.

Sovereign citizens are known to travel the country conducting training seminars on debt elimination schemes. The seminars focus on obtaining funds from a secret “Strawman” account using legitimate IRS forms, UCC forms, and fraudulent financial documents. Sovereign citizens believe once the documentation is filed, they gain access to their “Strawman” account with the Treasury Department.

Some or all of the following may provide an indication of sovereign activity. However it is important to note these activities may also be indicative of lawful, innocent conduct and in some instances may constitute the exercise of rights guaranteed by the United States Constitution. For these reasons, these indicators should be considered in the context of other suspicious behavior and the totality of the circumstances in which they are observed or reported.

Generally, sovereign citizens do not operate as a group or have an established leadership hierarchy. Rather, they act independently or in loosely affiliated groups which come together for training, to assist with paperwork, and to socialize based on sovereign ideology. Sovereign citizens often refer to themselves as “Freemen.” [Note: The use of the word “Freemen” does not inherently indicate a connection to any specific group, however, some use the term “Freemen” in their group name. Others may indicate they are a “free man,” meaning free from government control.]

Sovereign citizens believe the USG is illegitimate and has drifted away from the true intent of the Constitution. As a result, the USG is not perceived to be acting in the interest of the American people. These groups generally do not adhere to federal, state, or local laws. Some sovereign citizens believe federal and state officials have no real authority and will only recognize the local sheriff’s department as the only legitimate government official. Other law enforcement officials are viewed as being oppressive and illegitimate.

Individuals who adhere to this ideology believe their status as a sovereign citizen exempts them from US laws and the US tax system. They believe the US Federal Reverse System, the Treasury Department, and banking systems are illegitimate. Therefore, one of the perceived “benefits” of being a sovereign citizen is not paying federal or state taxes.

Sovereign citizens view the USG as bankrupt and without tangible assets; therefore, the USG is believed to use citizens to back US currency. Sovereign citizens believe the USG operates solely on a credit system using American citizens as collateral. Sovereign citizens exploit this belief by filing fraudulent financial documents charging their debt to the Treasury Department. In addition, they routinely engage in mortgage, credit card, tax, and loan fraud.