The following bulletin was posted on the document sharing website Scribd by Politico Cybersecurity Editor Shaun Waterman.  The bulletin refers to Korean malware used by “unknown computer network exploitation (CNE) operators” that is believed to have been used in the recent attack on Sony Pictures Entertainment.  The bulletin was first reported by Reuters on December 1, 2014. 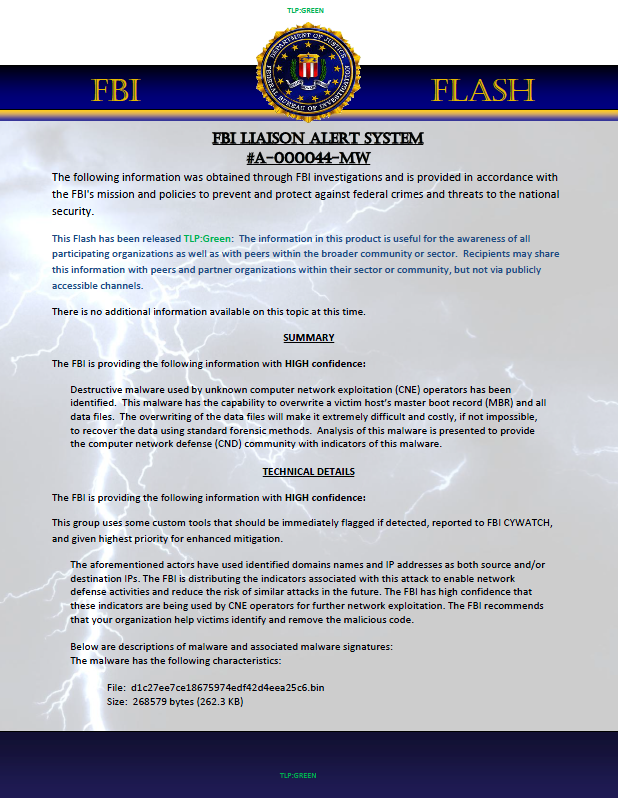 Destructive malware used by unknown computer network exploitation (CNE) operators has been identified. This malware has the capability to overwrite a victim host’s master boot record (MBR) and all data files. The overwriting of the data files will make it extremely difficult and costly, if not impossible, to recover the data using standard forensic methods. Analysis of this malware is presented to provide the computer network defense (CND) community with indicators of this malware.

This group uses some custom tools that should be immediately flagged if detected, reported to FBI CYWATCH, and given highest priority for enhanced mitigation.
The aforementioned actors have used identified domains names and IP addresses as both source and/or destination IPs. The FBI is distributing the indicators associated with this attack to enable network defense activities and reduce the risk of similar attacks in the future. The FBI has high confidence that these indicators are being used by CNE operators for further network exploitation. The FBI recommends that your organization help victims identify and remove the malicious code.

Below are descriptions of malware and associated malware signatures:

The malware has the following characteristics:

The original filename of this file is unknown, but it was likely “diskpartmg16.exe”. This file serves as a dropper. It drops destructive malware, “igfxtrayex.exe”. When the dropper file was executed, it started a second instance of itself with “-i” as an argument, then terminated.

The second instance of the dropper file installed itself as the “WinsSchMgmt” service with “-k” as a command line argument, started the service, then terminated.

The following strings of interest were in this dropper file:

This file is destructive malware: a disk wiper with network beacon capabilities. If “igfxtrayex.exe” is run with no parameters, it creates and starts a copy of itself with the “–i” argument. After 10 minutes, the “igfxtrayex.exe” makes three copies of itself and places them in the same directory it was executed from. These copies are named according to the format “taskhostXX.exe” (where X is a randomly generated ASCII character). These copies are then executed, each with a different argument (one being “-m”, one being “-d” and the other “-w”). Network connection attempts are made to one of three hard-coded IP addresses in a random order to either port 8080 or 8000. If a connection to the IP address cannot be made, it attempts to connect to another of the three IP addresses, until connections to all three IP addresses have been attempted. The following command-line string is then executed: “cmd.exe /c net stop MSExchangeIS /y”. A 120 minute (2 hour) sleep command is issued after which the computer is shutdown and rebooted.

This file when executed starts a listener on localhost port 80. It has 3 files contained in the resource section, all xor’d with 0x63.

This SYS file is a commercially available tool that allows read/write access to files and raw disk sectors for user mode applications in Windows 2000, XP, 2003, Vista, 2008 (32-bit). It is dropped from resource ID 0x81 of “igfxtrayex.exe”.

This SYS file is a also a commercially available tool that allows read/write access to files and raw disk sectors for user mode applications in Windows 2000, XP, 2003, Vista, 2008 (64-bit). It is dropped from resource ID 0x83 of “igfxtrayex.exe”.

The following Snort signature can be used to detect the beacon traffic, though by the time the beacons occur, the destructive process of wiping the files has begun:

The following YARA signatures will detect this malware on the host:

The FBI encourages recipients who identify the use of tool(s) or techniques discussed in this document to report information to their local FBI field office or the FBI’s 24/7 Cyber Watch (CyWatch). Field office contacts can be identified at www.fbi.gov/contact-us/field. CyWatch can be contacted by phone at 855-292-3937 or by e-mail at CyWatch@ic.fbi.gov. When available, each report submitted should include the date, time, location, type of activity, number of people, and type of equipment used for the activity, the name of the submitting company or organization, and a designated point of contact.