The following document was obtained from the website of the Chicago Fraternal Order of Police Lodge 7. 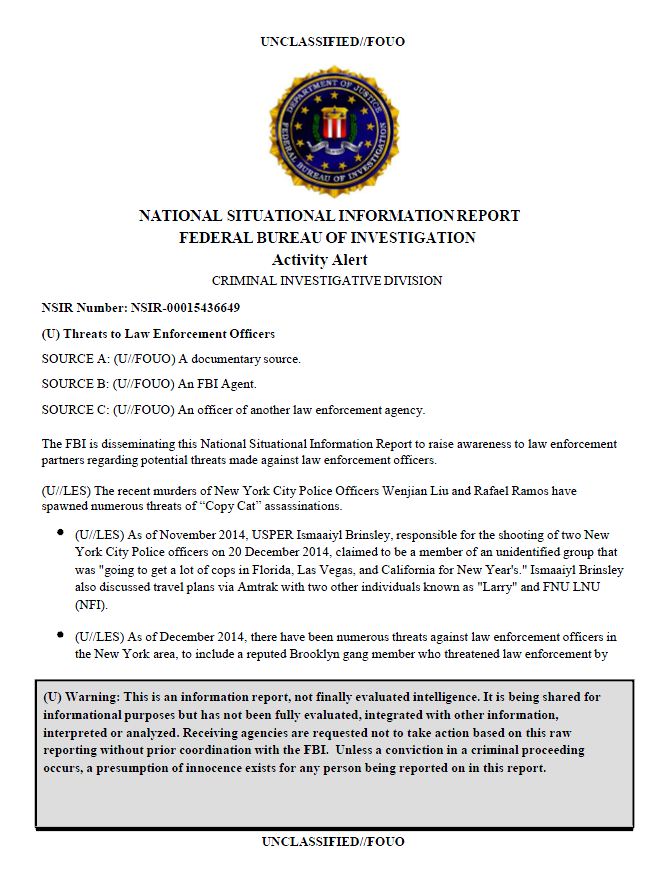 (U) Threats to Law Enforcement Officers

SOURCE A: (U//FOUO) A documentary source.

SOURCE C: (U//FOUO) An officer of another law enforcement agency.

The FBI is disseminating this National Situational Information Report to raise awareness to law enforcement partners regarding potential threats made against law enforcement officers.

(U//LES) As of November 2014, USPER Ismaaiyl Brinsley, responsible for the shooting of two New York City Police officers on 20 December 2014, claimed to be a member of an unidentified group that was “going to get a lot of cops in Florida, Las Vegas, and California for New Year’s.” Ismaaiyl Brinsley also discussed travel plans via Amtrak with two other individuals known as “Larry” and FNU LNU (NFI).

(U//LES) As of December 2014, there have been numerous threats against law enforcement officers in the New York area, to include a reputed Brooklyn gang member who threatened law enforcement by posting an online photograph of a man opening fire into a marked police cruiser just hours after the murder of Officers Liu and Ramos. It appeared that the posted photograph was taken from a movie.

(U//LES) As of December 2014, FBI Baltimore received uncorroborated information regarding a threat against “white cops” by members of the Black Guerilla Family (BGF). BGF members were planning to target these law enforcement officers to “send a message” (NFI).

(U//LES) As of December 2014, in Memphis, Tennessee, the Department of Homeland Security and local law enforcement interviewed a young man who wrote online that he was heading to New York City to kill two more police officers. The identified subject allegedly wrote “Good Job #F-K12 Kill em all i’m on my way to NY now #shootthepolice 2 more going down tomorrow.” No charges were filed against the subject as he stated he was intoxicated when he wrote the post.

(U//LES) As of December 2014, according to the Colorado Information Analysis Center, the following threat was made targeting Colorado law enforcement officers. “SINCE DARREN WILSON our group has killed 6 retired sheriffs and cops……because of this event we will hunt two more in colorado this week…..for every innocent citizen that cops kill WE, VETERANS WILL KILL RETIRED HELPLESS COPS……..we already started and MORE TO COME NOW…….join us and kill any cop or any retired cop !!!!!!! MORE PEOPLE HAVE BEEN KILLED SINCE THE PROTEST !!! THEY DONT CARE, SO NOW REAL HEROS WILL HUNT THEM ALL !!! fuck ISIS, COPS ARE THE REAL ENEMIES OF FREEDOM LOVING AMERICANS and TIME TO STRIKE BACK IN ALL OUT WAR IS NOW !!”

(U//LES) As of December 2014, the Rialto Police Department, California, received information that an USPER Kenneth Wayne Wilson commented his desire to kill law enforcement officers on the East Orange New Jersey Police Department’s Google plus page. The individual also commented that he is from Rialto.

(U//LES) As of December 2014, the Washington DC, Metro Police issued an officer safety alert in response to the shooting of two civilian vehicles. A white Ford Fusion and a grey Camero displaying a Maryland Fraternal Order of Police license plate were both shot at while driving in Northwest DC. Although there is no current intelligence to indicate the subjects believed the drivers to be law enforcement officers, this alert was disseminated out of an abundance of caution for officer safety and a reminder that any law enforcement identifiers could increase target potential.

(U//LES) The above information is provided as a reminder to law enforcement partners to remain vigilant both on and off duty. Be mindful if displaying any type of identifiers related to law enforcement such as bumper or window stickers.