FBI Rage and Racism: Skinhead Violence On The Far Right 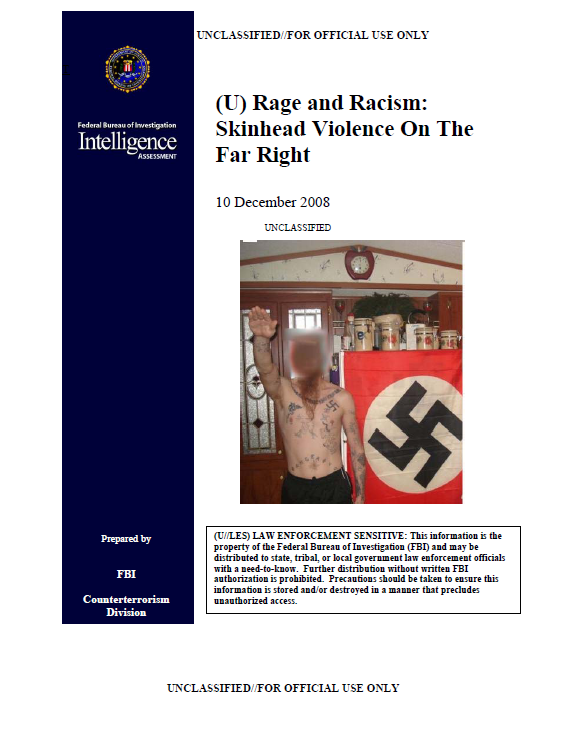 (U) Rage and Racism: Skinhead Violence on the Far Right

(U//FOUO) This intelligence assessment examines acts of violence by racist skinheads1 between 1 January 2007 and 30 September 2008. For the purposes of this report these acts are limited to physical violence against persons (assaults, rape, murder) and property (arson). Threats of violence and violence by incarcerated racist skinheads who are members of prison gangs such as the Aryan Brotherhood are not included. The assessment is designed to help law enforcement become more aware of the violent tendencies of racist skinheads. The statistical information for this report is drawn from news reports available on the Internet, police reports, and FBI case information.

1 (U) Not all skinheads are racist. Anti-fascist skinheads oppose the racist skinheads and sometimes become the objects of their rage. The two factions often dress alike and cannot easily be distinguished.

(U) Executive Summary
(U//FOUO) The FBI assesses with high confidence2 that racist skinheads are the most violent
element within the white nationalist extremist movement. The skinhead movement is an intense
and aggressive subculture, into which the introduction of racism has led to often brutal assaults
against ethnic, religious, or social minorities. Racist skinheads are not universally accepted
within the white nationalist extremist movement but nevertheless play an important role. They
are viewed as the movement’s front line soldiers willing to fight for the white race. The FBI
judges with high confidence that violence by racist skinheads is likely to continue as long as the
combination of aggression and racism remain. 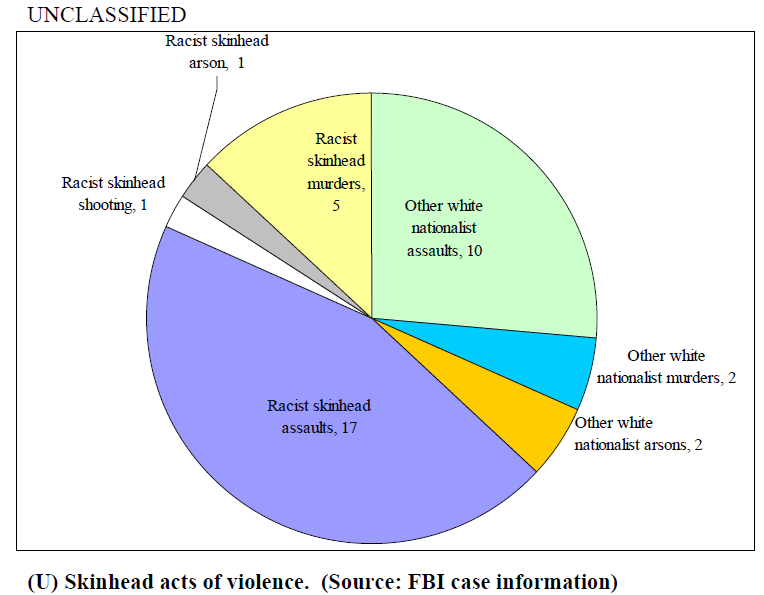 (U/FOUO) Thirteen of the 24 violent acts (54 percent) committed by racist skinheads since January 2007 were against ethnic or other minorities. Targets included African Americans (six attacks), Hispanics (three attacks), Asians (two attacks), an Arab (one attack), and a white homosexual man (one attack). The violence included nine assaults, three murders, and an arson which may have been preplanned.

At least four attacks resulted from verbal confrontations. Murder victims included a Hispanic male shot and killed during an assault, an Asian female shot and killed in her car, and a homosexual man kidnapped and strangled. The Asian female was known to her assailant, but the motive for her murder is unknown. The homosexual man was chosen at random; his two assailants initially intended to rob him (ironically, one of the assailants was later killed by the other assailant during an altercation).

(U//FOUO) The FBI assesses with high confidence the greatest threat within the WNE
movement is the individual who has been influenced by racist rhetoric but acts alone. This
individual—the lone wolf—may either be dismissed from a group because of his violent
tendencies or leave because the group is not active enough for him. The lone wolf is also a threat
within the racist skinhead movement and may be even more dangerous because of the already
violent attributes of racist skinheads. The most recent example is a racist skinhead lone wolf
who firebombed a synagogue in Oklahoma City, Oklahoma, in April 2004 and was subsequently
convicted and sentenced to 39 years in prison.