The following guide was obtained from the website of the Missouri Association for Court Administration. 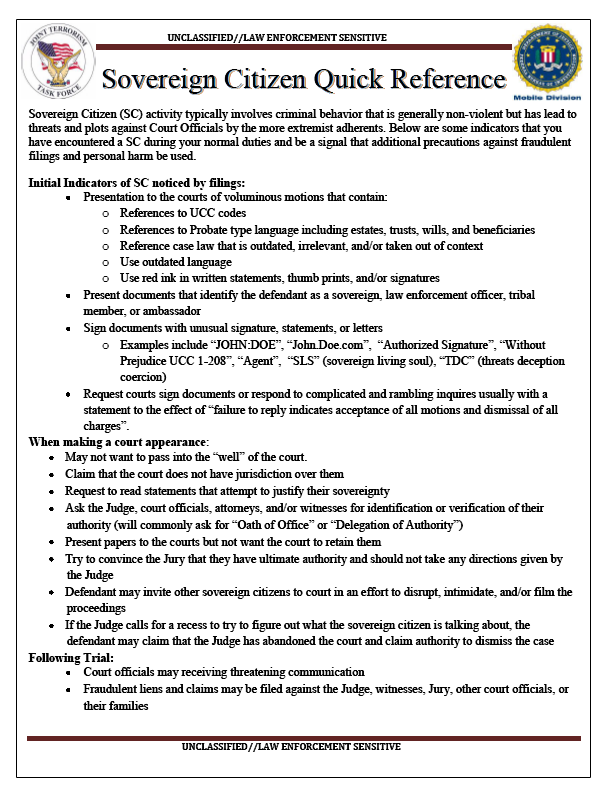 Sovereign Citizen (SC) activity typically involves criminal behavior that is generally non-violent but has lead to threats and plots against Court Officials by the more extremist adherents. Below are some indicators that you have encountered a SC during your normal duties and be a signal that additional precautions against fraudulent filings and personal harm be used.

Presentation to the courts of voluminous motions that contain:

Present documents that identify the defendant as a sovereign, law enforcement officer, tribal member, or ambassador

Request courts sign documents or respond to complicated and rambling inquires usually with a statement to the effect of “failure to reply indicates acceptance of all motions and dismissal of all charges”.

When making a court appearance:

May not want to pass into the “well” of the court.

Ask the Judge, court officials, attorneys, and/or witnesses for identification or verification of their authority (will commonly ask for “Oath of Office” or “Delegation of Authority”)

Defendant may invite other sovereign citizens to court in an effort to disrupt, intimidate, and/or film the proceedings

If the Judge calls for a recess to try to figure out what the sovereign citizen is talking about, the defendant may claim that the Judge has abandoned the court and claim authority to dismiss the case

Following Trial: Court officials may receiving threatening communication Fraudulent liens and claims may be filed against the Judge, witnesses, Jury, other court officials, or their families.