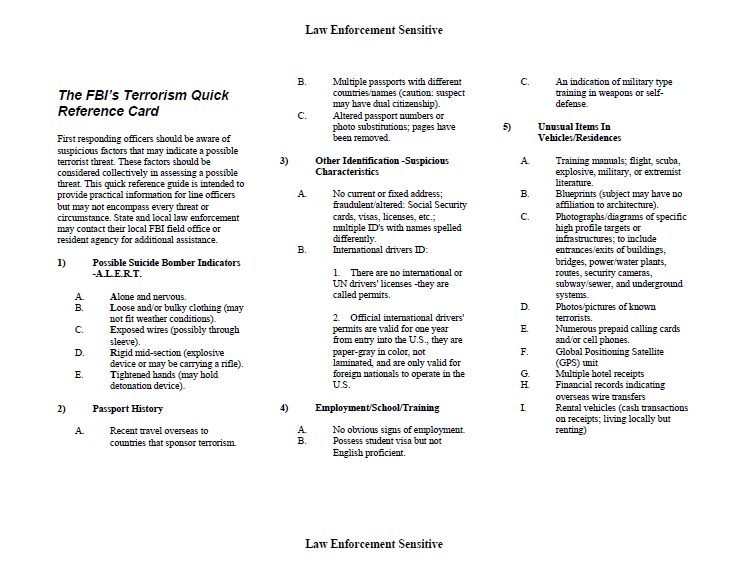 First responding officers should be aware of suspicious factors that may indicate a possible terrorist threat. These factors should be considered collectively in assessing a possible threat. This quick reference guide is intended to provide practical information for line officers but may not encompass every threat or circumstance. State and local law enforcement may contact their local FBI field office or resident agency for additional assistance.

A. Alone and nervous.

B. Loose and/or bulky clothing (may not fit weather conditions).

D. Rigid mid-section (explosive device or may be carrying a rifle).

A. Recent travel overseas to countries that sponsor terrorism.

B. Multiple passports with different countries/names (caution: suspect may have dual citizenship).

1. There are no international or UN drivers’ licenses -they are called permits.

2. Official international drivers’ permits are valid for one year from entry into the U.S., they are paper-gray in color, not laminated, and are only valid for foreign nationals to operate in the U.S.

A. No obvious signs of employment.

B. Possess student visa but not English proficient.

C. An indication of military type training in weapons or self-defense.

B. Blueprints (subject may have no affiliation to architecture).

A. Baby stroller or shopping cart.

A. Unusual requests, such as:

2. Asking for a specific view of bridges, airports, military/government installation (for observational purposes).

B. Suspicious or unusual items left behind.

C. Use of lobby or other pay phone instead of room phone.

CAUTION: The following factors, which may constitute activity protected by the United States Constitution, should only be considered in the context of other suspicious activity and not be the sole basis of law enforcement action.

A. Public demonstrations and rallies.

B. Information about new groups forming.

9) Thefts, Purchases, Or Discovery Of:

C. Vehicles (to include rentals -fraudulent name; or failure to return vehicle).

• Large theft or sales of chemicals which, when combined, create ingredients for explosives (fuel oil, nitrates).

• Theft or abnormal sales of containers (for example, propane bottles) or possible vehicles (trucks or cargo vans) in combination with other indicators.

• Reports of explosions where not authorized.

• Theft or unusual sales of large numbers of semi-automatic weapons, especially those which are known to be readily converted to fully- automatic.

• Theft, sales, or seizure of night vision or thermal imaging equipment when combined with other indicators.

• Theft, loss, seizure, or recovery of large amounts of cash by groups advocating violence against the government, military, or similar targets.

• Sales or theft of large quantities of baby formula, or an unexplained shortage in an area. (Baby formula is used to grow certain specific cultures.)

• Theft or solicitation for sales of live agents, toxins, or diseases from medical supply companies or testing and experimentation facilities.

• Sales to non-agricultural users or thefts of agricultural sprayers, or crop-dusting aircraft, foggers, river craft or other dispensing systems.

According to the Department of Homeland Security, nearly every major terrorist attack has been preceded by a thorough surveillance of the

targeted facility. Surveillance operations have certain characteristics that are particular to pre-operational activity. The degree of expertise used in the execution of the operation will increase or decrease the likelihood of detection. Some of these characteristics are:

• Suspicious persons or vehicles being observed in the same location on multiple occasions, including those posing as panhandlers, vendors, or others not previously seen in the area.

• Suspicious persons sitting in a parked car for an extended period of time for no apparent reason.

• Personnel observed near a potential target using or carrying video, still camera, or other observation equipment, especially when coupled with high magnification lenses.

• Suspicious persons showing an interest in or photographing security systems and positions.

• Personnel observed with facility maps and/or photographs, or diagrams with specific buildings or facilities highlighted; or with notes regarding

• Personnel observed parked near, standing near, or loitering near the same vicinity over several days, with no apparent reasonable explanation.

security procedures and responses or questioning security or facility personnel.

• Persons not fitting into the surrounding environment, such as wearing improper attire for the location. • Theft of official identification (ID)

• Computer hackers attempting to access sites with personal information, maps, or other data useful to compiling a target information packet.

• A blank facial expression in an individual may be indicative of someone concentrating on something not related to what they appear to be doing.