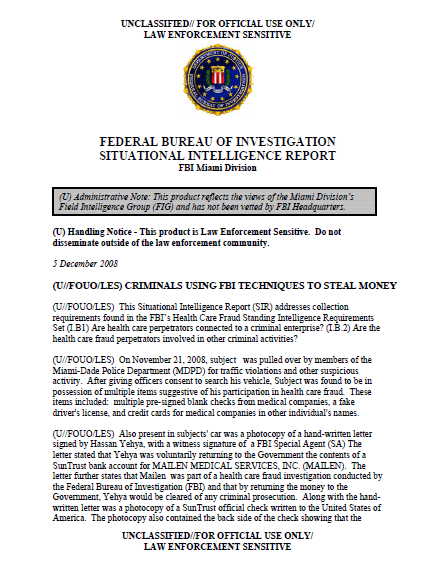 (U//FOUO/LES) On November 21, 2008, subject was pulled over by members of the
Miami-Dade Police Department (MDPD) for traffic violations and other suspicious
activity. After giving officers consent to search his vehicle, Subject was found to be in
possession of multiple items suggestive of his participation in health care fraud. These
items included: multiple pre-signed blank checks from medical companies, a fake
driver’s license, and credit cards for medical companies in other individual’s names.

(U//FOUO/LES) Also present in subjects’ car was a photocopy of a hand-written letter
signed by Hassan Yehya, with a witness signature of a FBI Special Agent (SA) The
letter stated that Yehya was voluntarily returning to the Government the contents of a
SunTrust bank account for MAILEN MEDICAL SERVICES, INC. (MAILEN). The
letter further states that Mailen was part of a health care fraud investigation conducted by
the Federal Bureau of Investigation (FBI) and that by returning the money to the
Government, Yehya would be cleared of any criminal prosecution. Along with the handwritten
letter was a photocopy of a SunTrust official check written to the United States of
America. The photocopy also contained the back side of the check showing that the check was deposited into a Department of Justice (DOJ) bank account. The Special Agent reviewed the letter and noted that many different items were wrong with the letter:

(U) In the past, as part of ongoing healthcare fraud investigations, Agents frequently
confronted owners of medical companies whose funds had been temporarily placed on
hold by bank officials. During these interviews, owners were often persuaded to return
the health care fraud proceeds in the bank account to the Government. As part of this
process, the individual was required to write out a statement that they were voluntarily
returning the money. Often the individual would request a photocopy of their handwritten
statement.