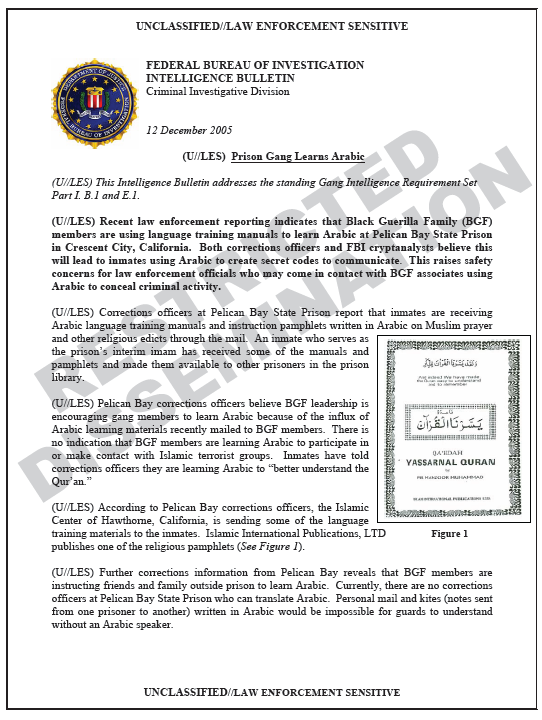 (U//LES) Corrections officers at Pelican Bay State Prison report that inmates are receiving Arabic language training manuals and instruction pamphlets written in Arabic on Muslim prayer and other religious edicts through the mail. An inmate who serves as the prison’s interim imam has received some of the manuals and pamphlets and made them available to other prisoners in the prison library.

(U//LES) Pelican Bay corrections officers believe BGF leadership is encouraging gang members to learn Arabic because of the influx of Arabic learning materials recently mailed to BGF members. There is no indication that BGF members are learning Arabic to participate in or make contact with Islamic terrorist groups. Inmates have told corrections officers they are learning Arabic to “better understand the Qur’an.”

(U//LES) According to Pelican Bay corrections officers, the Islamic Center of Hawthorne, California, is sending some of the language training materials to the inmates. Islamic International Publications, LTD publishes one of the religious pamphlets (See Figure 1).

(U//LES) Further corrections information from Pelican Bay reveals that BGF members are instructing friends and family outside prison to learn Arabic. Currently, there are no corrections officers at Pelican Bay State Prison who can translate Arabic. Personal mail and kites (notes sent
from one prisoner to another) written in Arabic would be impossible for guards to understand without an Arabic speaker.﻿

(U//LES) BGF has members nationwide in both state and federal prisons. Pelican Bay State Prison houses approximately 30 BGF members. Historically, BGF has used basic codes and ciphers to communicate. As such, FBI cryptanalysts believe this change represents a move
toward a more advanced technique, making it more difficult for corrections officers to detect. This has caused security concerns among corrections officers, whose safety depends, in part, on deciphering these messages.