The following bulletin was originally released by WikiLeaks on February 13, 2013.  The bulletin describes a shift in Los Zetas recruitment methods towards non-traditional associates such as street gangs and private individuals inside the U.S. 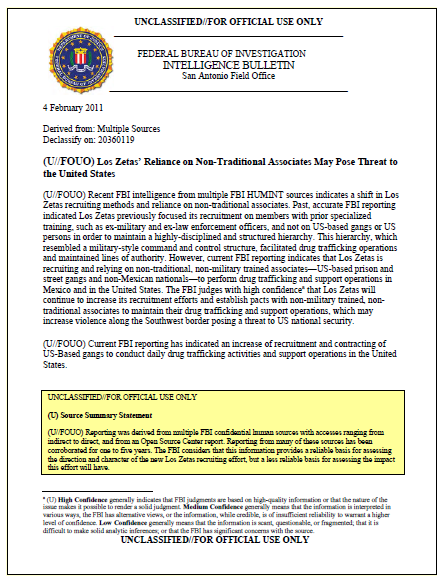 (U//FOUO) Recent FBI intelligence from multiple FBI HUMINT sources indicates a shift in Los Zetas recruiting methods and reliance on non-traditional associates. Past, accurate FBI reporting indicated Los Zetas previously focused its recruitment on members with prior specialized training, such as ex-military and ex-law enforcement officers, and not on US-based gangs or US persons in order to maintain a highly-disciplined and structured hierarchy. This hierarchy, which resembled a military-style command and control structure, facilitated drug trafficking operations and maintained lines of authority. However, current FBI reporting indicates that Los Zetas is recruiting and relying on non-traditional, non-military trained associates—US-based prison and street gangs and non-Mexican nationals—to perform drug trafficking and support operations in Mexico and in the United States. The FBI judges with high confidence that Los Zetas will continue to increase its recruitment efforts and establish pacts with non-military trained, nontraditional associates to maintain their drug trafficking and support operations, which may increase violence along the Southwest border posing a threat to US national security.

(U//FOUO) Current FBI reporting has indicated an increase of recruitment and contracting of US-Based gangs to conduct daily drug trafficking activities and support operations in the United States.

(U//FOUO) The FBI San Antonio judges with high confidence that Los Zetas will continue to increase their recruitment efforts and establish pacts with other Mexico and US-based prison and street gangs, as well as non-Mexican nationals to maintain their drug trafficking and support operations. FBI San Antonio believes the Los Zetas’ shift in recruitment efforts will most likely not increase its membership numbers drastically, as recent reporting has indicated that these new members lack the training and skills to elude GOM law enforcement and military, which result in many Los Zetas casualties or captures.

(U//FOUO) FBI judges with moderate confidence that Los Zetas will likely pose a higher national security threat to the United States, based on their demonstrated capabilities for violence, their recent murders of US citizens, increased kidnappings of US citizens on both sides of the border, and their continued participation in the US drug trade. With the GOM military counter-narcotic operations and turf battles against other DTOs, Los Zetas violence and criminal activity will most likely increase.

(U//FOUO) In order to adequately assess the threat to the United States, FBI San Antonio would need information that indicated larger-scale or multiple plans to attack are being planned. With the recruitment of new members, Los Zetas have lost part of their disciplined command and control structure needed to maintain order within the organization, which is likely to hinder their ability to carry out complex attacks and could increase the likelihood that GOM officials may learn of planned attacks or operations. High-level Los Zetas members with minimal command and control authority have hindered their operations, and caused countless casualties and captures. Furthermore, new members are often undisciplined, which has led to recruits failing to follow orders and has gained the Los Zetas unneeded attention, as evidenced in the Falcon Lake shooting.