On April 13, 2010, Public Intelligence received a message from Danny Rains who is an investigator for the Federal Emergency Management Agency in the Office of Security requesting the removal of a document entitled “National Level Exercise 2010 (NLE 10) Exercise Overview”. The ten page document, which is described in FEMA’s request as “very sensitive”, consists of approximately 20 PowerPoint slides including the title page and was published nearly seven months ago on August 8, 2009.  The document is labeled “For Official Use Only” and is marked as a draft copy.  The contents of the brief are basically a calender of potential dates for the exercise and very brief descriptions of some preliminary plans for the exercise.  The document has already been seen by a large number of people and has been discussed on a variety of  websites and forums, which include mirrors in some cases.  The document was originally discovered by us on the website of the local government in Mesquite, Nevada at the following link:

The document was removed at some point over the past month.

The question is why would FEMA specifically want this document removed?  We have published a large number of documents from FEMA and DHS at the “For Official Use Only” level and have never before received a notice from them.  However, the National Level Exercise planned for this year has been a subject of much controversy recently.  In an article from late March titled “‘Terrorist attack’ on Las Vegas canceled: Politics over preparedness?”, Christian Science Monitor reporter Patrik Jonsson writes:

One thing is definite about this year’s federal play-acting exercise to assess national emergency preparedness: A faux radioactive nuke, or “dirty bomb,” will not be blowing up the Las Vegas Strip in May.

Reminiscent of Stephen King’s “The Stand” featuring a similar cataclysmic showdown in Vegas, the preparedness exercise proved too much for many Nevadans, already battered by a poor economy and worried about a PR nightmare.

Sen. Harry Reid (D) of Nevada, in the midst of battling for the White House’s healthcare reforms, wrote late last year that to “simulate a nuclear detonation in the heart of the city would unacceptably harm the Southern Nevadan economy.”

Against that practical and political backdrop, the Obama administration scratched Vegas as the National Level Exercise host city late last year. That leaves the NLE 2010, which involves 10,000 responders, still on the calendar but without a practice field: DHS has yet to publicly announce the city – or even the scenario – it plans to use in mid-May. (It usually takes upward of a year to plan an NLE exercise.)

“NLE 2010 is currently in the final stages of planning for this spring,” writes FEMA spokesman Brad Carroll in an e-mail. “We will continue to reach out to key stakeholders, including state and local officials, to receive their input as we prepare for and continue to develop this important event.”

The possibility that politics may have affected a national preparedness event rankles some Republicans on Capitol Hill, especially after Obama in July halted a Bush-era “scenario planning” program to review its effectiveness.

A Washington Post article from April 2, 2010 states that the National Level Exercise is being scaled back, and that the “plan was to stage the nation’s first live exercise that simulates a nuclear bomb being detonated by terrorists in an American city, with 10,000 emergency responders, U.S. troops and officials playing out their roles in the heart of Las Vegas.”  The exercise was to be based upon National Planning Scenario 1 which concerns “Nuclear Detonation”, the details of which can be read here.  We have also published the National Level Exercise 2010 Training Manual. 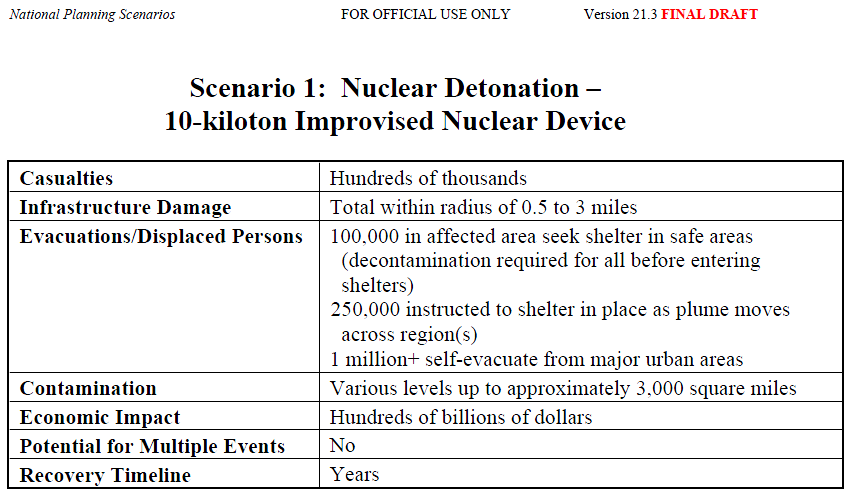 “(4) the term ‘sensitive information’ means any information, the loss, misuse, or unauthorized access to or modification of which could adversely affect the national interest or the conduct of Federal programs, or the privacy to which individuals are entitled under section 552a of title 5, United States Code (the Privacy Act), but which has not been specifically authorized under criteria established by an Executive order or an Act of Congress to be kept secret in the interest of national defense or foreign policy;”

However, the Computer Security Act of 1987 applies to computer systems used by the federal government and its contractors.  We are neither of these things.

I am an Investigator with the Department of Homeland Security/Federal
Emergency Management Agency (DHS/FEMA) your web site posted a document
at https://info.publicintelligence.net/19699407272009011351952.PDF,  this
document is marked Unclassified/ For Official Use Only (U/FOUO).

This document is considered by FEMA to be a very sensitive internal
document we are respectfully requesting that you take this down from
public view on your web site in accordance with The Computer Security
Act of 1987, Public Law 100-235, defines “sensitive information” as “any
information, the loss, misuse, or unauthorized access to or modification
of which could adversely affect the national interest or the conduct of
Federal programs.  We ask that you please comply with our request as
soon as possible.  Thank you in advance for your cooperation and
assistance on this matter.

WARNING: This document is FOR OFFICIAL USE ONLY (FOUO). It is to be
controlled, stored, handled, transmitted, distributed, and disposed of
in accordance with DHS policy relating to FOUO information. This
information shall not be distributed beyond the original addressees
without prior authorization of the originator. This communication, along
with any attachments, is covered by Federal and state law governing
electronic communications and may contain restricted and legally
privileged information. If the reader of this message is not the
intended recipient, you are hereby notified that any dissemination,
distribution, use or copying of this message is strictly prohibited. If
you have received this in error, please reply immediately to the sender
and delete this message.