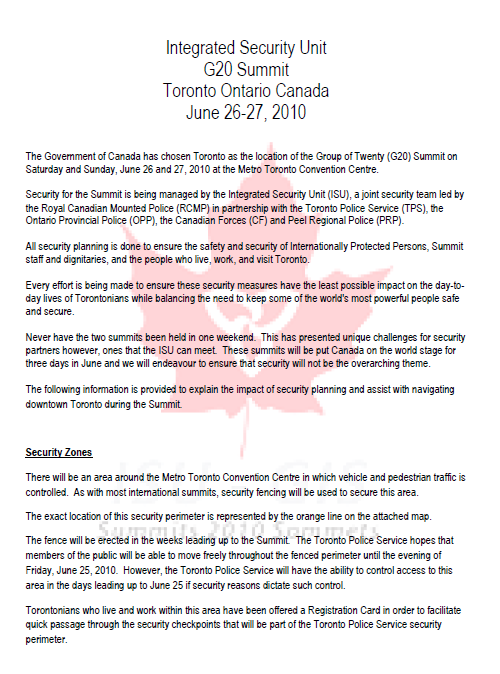 The Government of Canada has chosen Toronto as the location of the Group of Twenty (G20) Summit on Saturday and Sunday, June 26 and 27, 2010 at the Metro Toronto Convention Centre.

Security for the Summit is being managed by the Integrated Security Unit (ISU), a joint security team led by the Royal Canadian Mounted Police (RCMP) in partnership with the Toronto Police Service (TPS), the Ontario Provincial Police (OPP), the Canadian Forces (CF) and Peel Regional Police (PRP).

All security planning is done to ensure the safety and security of Internationally Protected Persons, Summit staff and dignitaries, and the people who live, work, and visit Toronto.

Every effort is being made to ensure these security measures have the least possible impact on the day-today lives of Torontonians while balancing the need to keep some of the world’s most powerful people safe and secure.

Never have the two summits been held in one weekend. This has presented unique challenges for security partners however, ones that the ISU can meet. These summits will be put Canada on the world stage for three days in June and we will endeavour to ensure that security will not be the overarching theme. The following information is provided to explain the impact of security planning and assist with navigating downtown Toronto during the Summit.

There will be an area around the Metro Toronto Convention Centre in which vehicle and pedestrian traffic is controlled. As with most international summits, security fencing will be used to secure this area. The exact location of this security perimeter is represented by the orange line on the attached map. The fence will be erected in the weeks leading up to the Summit. The Toronto Police Service hopes that members of the public will be able to move freely throughout the fenced perimeter until the evening of Friday, June 25, 2010. However, the Toronto Police Service will have the ability to control access to this area in the days leading up to June 25 if security reasons dictate such control.

Torontonians who live and work within this area have been offered a Registration Card in order to facilitate quick passage through the security checkpoints that will be part of the Toronto Police Service security perimeter.

Members of the public who have not received a Registration Card or who do not live or work in the area but require access into the security perimeter will have to present a piece of photo identification and clearly articulate a specific purpose and destination to be allowed through. This process may take some time and those seeking access into the security perimeter are asked to exercise patience when doing so.

The Canadian Charter of Rights and Freedoms guarantees freedom of thought, belief, opinion, expression and peaceful assembly. The Integrated Security Unit values these rights and will work to uphold them while ensuring public safety, peace and good order are maintained in Toronto.

We believe most groups will want to express themselves in a peaceful and responsible manner. However, we are preparing for any eventuality. Any interaction police have with demonstrators will be measured, balanced and appropriate to the circumstances at hand.

Specific charges will be applicable to anyone breaching a security perimeter or committing criminal offences.

The Integrated Security Unit has worked with the City of Toronto to identify North Queen’s Park as the Designated Speech Area.

As a Designated Speech Area, it will be equipped with audio-visual equipment that will televise the activities at the Park to the delegates at the Metro Toronto Convention Centre.

It is our hope that people will take advantage of this area and express themselves in a peaceful, lawful way.

The ISU is concerned about the safety and security of our most vulnerable communities.

We have been working with the City’s Shelter, Support & Housing Administration to try and address the needs of our homeless community in advance of the Summit.

For safety reasons, members of the homeless community will not be permitted access into the security perimeter once it has been secured.

Staff from Shelter, Support & Housing Administration has been using their resources and Streets-to-Homes program to encourage those most affected by these security perimeters to access services before the perimeter is secured.

The installation of CCTV cameras is to assist with ensuring the safety and security of dignitaries; business
owners; residents; people who work and visit the downtown area; and protestors.

These cameras are in addition to those already in place by the Toronto Police Service.

CCTV can be defined as an electronic monitoring system that makes use of video cameras, connected by means of a “closed” (non-broadcast) circuit to capture, collect, record and/or relay visual information about an event unfolding in a given area over time.

The use of CCTV is not a new concept. There are a number of public and private entities currently utilizing it as a means of ensuring the security of persons and property.

The Toronto Police Service has reviewed all aspects of CCTV technology, operations, impact, privacy concerns, best practices and governance. The Toronto Police Service has procedures in place governing continuity, control and auditing of access to video images. These measures ensure accountability and appropriate management of all aspects of the use of CCTV.

Only authorized Toronto Police Service members will have access to the recorded images. Images depicting evidence of a crime may be used in a court of law for the prosecution of the offender.

The Integrated Security Unit will be contracting private companies to operate some security screening services, in concert with police, at various locations of both the G8 and G20 summits.

While the Integrated Security Unit intends to contract out certain security services at some venues, the unit retains overall responsibility for security of the G8 and G20.

Using the private sector to perform this work will allow the Integrated Security Unit to maximize police resources and will ensure we can continue to meet our responsibilities in the communities we serve. It makes good financial sense to contract out this portion of the security work, allowing police to focus on maintaining public order and investigating criminal activities.

The ISU will maintain oversight of security screeners, and the security standards they apply. All contract security staff will have enhanced security clearances and will be required to have specialized training to operate necessary equipment.

The G8-G20 Integrated Security Unit is committed to keeping the heads of state, their families and delegates, the public – including protesters, police officers, emergency personnel, the environment and property – safe during the 2010 G8-G20 summits.