The following report was released by the Government Accountability Office on October 18, 2012. 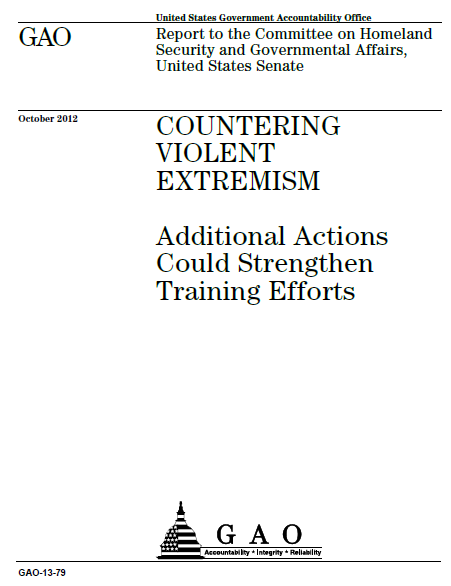 The majority of state and local participant feedback on training that DHS or DOJ provided or funded and that GAO identified as CVE-related was positive or neutral, but a minority of participants raised concerns about biased, inaccurate, or offensive material. DHS and DOJ collected feedback from 8,424 state and local participants in CVE-related training during fiscal years 2010 and 2011, and 77—less than 1 percent—provided comments that expressed such concerns. According to DHS and DOJ officials, agencies used the feedback to make changes where appropriate. DOJ’s Federal Bureau of Investigation (FBI) and other components generally solicit feedback for more formal, curriculum-based training, but the FBI does not require this for activities such as presentations by guest speakers because the FBI does not consider this to be training. Similarly, DOJ’s United States Attorneys’ Offices (USAO) do not require feedback on presentations and similar efforts. Nevertheless, FBI field offices and USAOs covered about 39 percent (approximately 9,900) of all participants in DOJ CVE-related training during fiscal years 2010 and 2011 through these less formal methods, yet only 4 of 21 FBI field offices and 15 of 39 USAOs chose to solicit feedback on such methods. GAO has previously reported that agencies need to develop systematic evaluation processes in order to obtain accurate information about the benefits of their training. Soliciting feedback for less formal efforts on a more consistent basis could help these agencies ensure their quality.

DOJ and DHS have undertaken reviews and developed guidance to help improve the quality of CVE-related training. For example, in September 2011, the DOJ Deputy Attorney General directed all DOJ components and USAOs to review all of their training materials, including those related to CVE, to ensure they are consistent with DOJ standards. In addition, in October 2011, DHS issued guidance that covers best practices for CVE-related training and informs recipients of DHS grants who use the funding for training involving CVE on how to ensure high-quality training. Since the departments’ reviews and efforts to implement the guidance they have developed are relatively new, it is too soon to determine their effectiveness.

To determine what concerns, if any, participants raised about CVE-related training, we reviewed course evaluations completed by participants of CVE-related training offered by DHS I&A, DHS Office for Civil Rights and Civil Liberties, DOJ BJA, and the FBI, and identified complaints or concerns about CVE-related training made formally in writing. We limited our analysis to training that was provided or funded by DHS or DOJ during fiscal years 2010 or 2011 and provided to a state or local entity (e.g., police department, community group, or fusion center). Two analysts independently reviewed 8,424 course evaluations from six training programs to consistently determine which ones included concerns or complaints. The analysts also assessed the nature of the concerns and complaints and assigned each complaint to one of three categories: (1) politically or culturally biased, (2) offensive, or (3) inaccurate. Where there were discrepancies between the analysts, they were resolved through supervisory review.

To identify formally submitted or documented complaints or concerns participants expressed, we asked DHS and DOJ to identify those submitted in writing to DHS or DOJ, or articulated to DHS or DOJ through other means but subsequently documented by the agency, from fiscal years 2010 through 2011. We also conducted keyword searches using LexisNexis and Google to identify concerns that were raised by either individuals or advocacy groups that were submitted in writing to DHS or DOJ. In addition, we interviewed representatives, including leaders, of select advocacy groups that raised concerns about CVE-related training to identify what concerns and complaints, if any, they submitted in writing to DHS or DOJ on behalf of training participants. The advocacy and civil liberties organizations we interviewed included the American Civil Liberties Union, the American-Arab Anti-Discrimination Committee, the Council on American Islamic Relations, and the Muslim Public Affairs Council. We selected these organizations based on their leadership in raising concerns we identified (e.g., by virtue of being the primary signatories) and upon the recommendation of other advocacy groups. These interviews also enabled us to confirm or obtain additional views on the formally documented complaints DHS or DOJ provided. Through these approaches, we identified a total of six letters of complaint regarding 18 alleged incidents of biased CVE and counterterrorism training that DHS or DOJ provided or funded during fiscal years 2010 and 2011. Given that the scope of this review is limited to CVE-related training provided to state and local officials and community members, and not training that is exclusively provided to federal officials, we determined that 7 of the alleged incidents described in five of the letters were relevant to this review. We also interviewed relevant DHS and DOJ officials to obtain their perspectives on the concerns raised in the written complaints and information on any actions agencies took in response to these incidents.