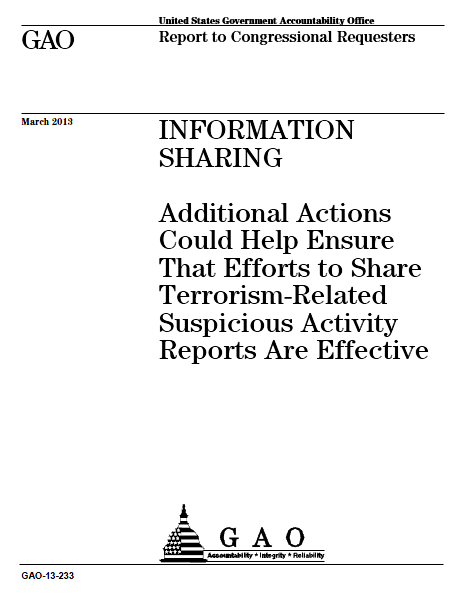 The Department of Justice (DOJ) has largely implemented the Nationwide Suspicious Activity Reporting Initiative among fusion centers—entities that serve as the focal point within a state for sharing and analyzing suspicious activity reports and other threat information. The state and local law enforcement officials GAO interviewed generally said the initiative’s processes worked well, but that they could benefit from additional feedback from the Federal Bureau of Investigation (FBI) on how the reports they submit are used. The FBI has a feedback mechanism, but not all stakeholders were aware of it. Implementing formalized feedback mechanisms as part of the initiative could help stakeholders conduct accurate analyses of terrorism-related information, among other things.

The technical means that federal, state, and local entities use to collect and share terrorism-related suspicious activity reports—Shared Spaces servers that DOJ provides to most fusion centers and the FBI’s eGuardian system—provide many overlapping or duplicative services. For example, both systems provide a national network for sharing the reports and tools to analyze them. The federal government is aware that duplication exists but supports both systems to enable fusion centers to control information on individuals, consistent with the centers’ privacy requirements, and facilitate the FBI’s investigative needs. However, the FBI was concerned that supporting two systems introduces risks that it will not receive all reports. For example, at the time of our review, many fusion centers were choosing not to automatically share all of their reports with the FBI’s system—although they may have shared reports via phone or other means—and DOJ had not fully diagnosed why. In its March 2013 letter commenting on a draft of this report, DOJ stated that it had made progress on this issue. DOJ also had not formally tested the exchange of information between the two systems to ensure that the exchanges were complete. Taking additional steps to mitigate the risks that reports are not fully shared could help DOJ ensure that the FBI receives all information that can support investigations.

Stakeholders GAO interviewed generally reported that training fully or partially met objectives, such as making law enforcement more aware of the initiative. DOJ has mechanisms to assess the analyst training to help ensure that analysts have the information they need to review and share reports. However, DOJ had not fully assessed its training provided to officers on the front line, which could help ensure that officers receive sufficient information to be able to recognize terrorism-related suspicious activity. DOJ has provided training to executives at 77 of 78 fusion centers, about 2,000 fusion center analysts, and about 290,000 of the 800,000 line officers. DOJ is behind schedule in training the line officers but is taking actions to provide training to officers who have not yet received it.

DOJ and other agencies collect some data to assess the performance of the Nationwide Suspicious Activity Reporting Initiative—such as the number of reports submitted and resulting FBI investigations. These data show that stakeholders were increasingly submitting and using terrorism-related reports. However, DOJ had not yet established plans and time frames for implementing measures that assess the homeland security results achieved by the initiative and thus lacked a means for establishing accountability for implementing them. 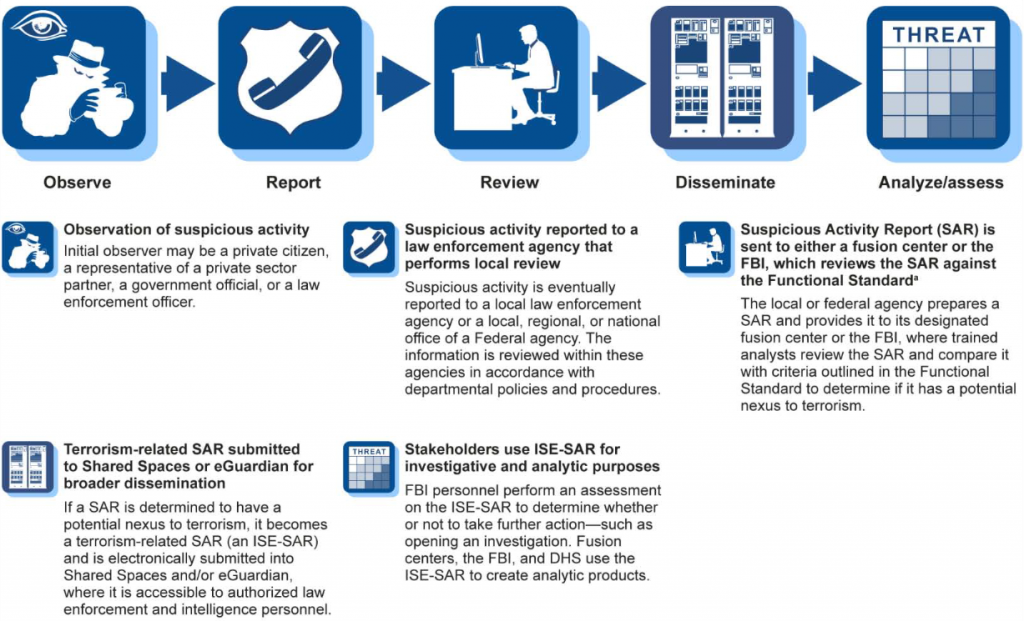