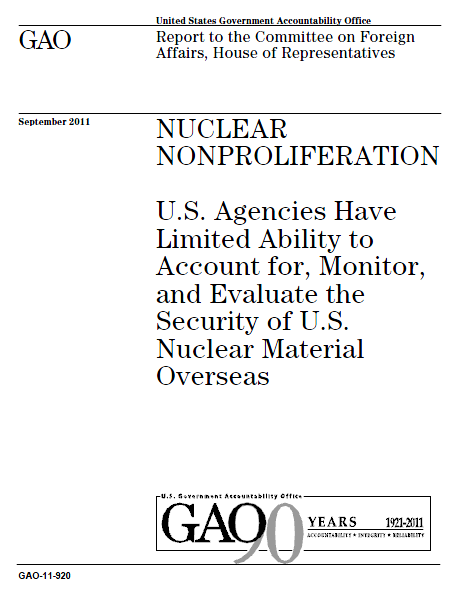 NUCLEAR NONPROLIFERATION: U.S. Agencies Have Limited Ability to Account for, Monitor, and Evaluate the Security of U.S. Nuclear Material Overseas

DOE, NRC, and State Are Not Able to Fully Account for U.S. Nuclear Material Located at Foreign Facilities

U.S. Nuclear Cooperation Agreements Generally Require That Partners Report Inventory Information upon Request, but DOE and NRC Have Not Systematically Sought Such Data

In addition, IAEA, DOE, NRC, and State officials told us that IAEA’s safeguards activities provide a level of assurance that nuclear material is accounted for at partner facilities. The safeguards system, which has been a cornerstone of U.S. efforts to prevent nuclear proliferation, allows IAEA to independently verify that non-nuclear weapons states that signed the NPT are complying with its requirements. Under the safeguards system, IAEA, among other things, inspects facilities and locations containing nuclear material declared by countries to verify its peaceful use. Inspectors from IAEA’s Department of Safeguards verify that the quantities of nuclear material that these non-nuclear weapons states declared to IAEA are not diverted for other uses. IAEA considers such information confidential and does not share it with its member states, including the United States, unless the parties have agreed that IAEA can share the information.

IAEA’s inspectors do not verify nuclear material by country of origin or associated obligation. DOE, State, and IAEA officials told us that, because IAEA does not track the obligation of the material under safeguards, IAEA may notice discrepancies in nuclear material balances through periodic reviews of countries’ shipping records. However, these officials said that IAEA does not have the ability to identify whether and what volume of nuclear material at partner country facilities is U.S.-obligated and therefore subject to the terms of U.S. nuclear cooperation agreements.

DOE and NRC Do Not Have a Current Comprehensive Inventory of U.S. Material Overseas

However, when we requested information regarding the amount of U.S. material at partner facilities, GTRI stated that they could not report on the amount of U.S. nuclear material remaining at facilities unless it was scheduled for GTRI to return. In addition, in February 2011 written comments to us, GTRI stated it was not responsible for acquiring or maintaining inventory information regarding U.S. nuclear material overseas. A long-time contract employee for DOE’s Office of Nonproliferation and International Security stated he has tried to collect information regarding U.S. nuclear material overseas from various sources including a list of countries eligible for GTRI’s fuel return program, NMMSS, and other sources, but it is not possible to reconcile information from the various lists and sources and consequently there is no list of U.S. inventories overseas.

According to public information, the United States has additional measures known as administrative arrangements with five of its trading partners to conduct annual reconciliations of nuclear material amounts. In addition, for all partners, DOE and NRC officials told us that an exchange of diplomatic notes is sent prior to any transfer to ensure that U.S. nuclear material is not diverted for non-peaceful purposes, and which binds the partner to comply with the terms of the nuclear cooperation agreement. However, the measures cited by DOE are not comprehensive or sufficiently detailed to provide the specific location of U.S. nuclear material overseas.