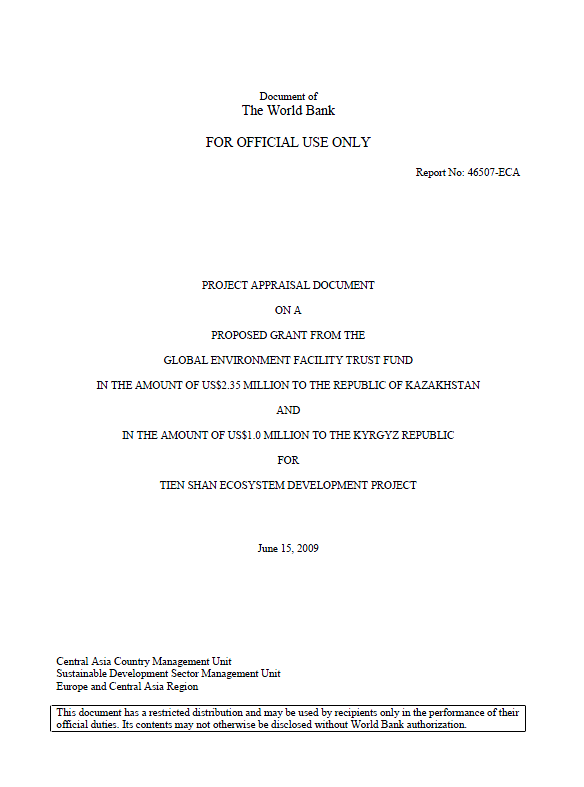 I. STRATEGIC CONTEXT AND RATIONALE

A. Country and sector issues

1. The Tien Shan mountain range covers most of the Kyrgyz Republic, southern Kazakhstan, and smaller areas of Uzbekistan, China, and Tajikistan. This territory plays an exceptional role in conserving biodiversity and maintaining environmental sustainability in Central Asia. In 2004, Conservation International (CI) identified the Tien Shan range as a “biodiversity hotspot” based on the high numbers of endemic species and the significant level of threat—the concentration of species in Western Tien Shan is 63 times higher for birds and 37 times higher for mammals than the average for Central Asia.

2. The Tien Shan is an oasis surrounded by vast arid and semi-desert plains particularly to the north,
producing conditions conducive to high biological diversity. Ecosystems range from glaciers to deserts
creating exceptional habitat diversity and endemism in a relatively small part of Central Asia. Winds that
travel undisturbed for long distances over the steppes are lifted by the Tien Shan range causing
concentrated precipitation; the area is characterized by a continental climate with enormous temperature
variations that range from -50 C to above 40 C. Tien Shan residents and surrounding populations in both
countries derive livelihoods, energy, and water from the range, and enjoy recreational activities, as do the
growing numbers of overseas visitors. The range is crucial for agro-biodiversity and is home to a striking
array of wild ancestral landraces of commercialized crops, in particular, valuable fruit and nut trees such
as apples, and walnuts, among others.2 The Tien Shan range also plays a key connecting role in the
distribution of Asian mountain fauna such as the globally endangered snow leopard. Thus, the area
justifies continued attention to biodiversity conservation through site-specific and regional approaches.

3. The Tien Shan’s importance for biodiversity conservation is also recognized at a national level.
The percentage of Protected Areas (PAs) in the Tien Shan range (10.6 percent) is higher than the average of the two countries (7.5 percent). Table 1 below summarizes the importance of PAs in the region.

4. Unfortunately, threats to the Tien Shan’s unique biodiversity—habitat destruction, overgrazing,
poaching, unregulated game hunting, and excessive firewood extraction— are accelerating and an even
greater threat is posed by the long-term effects of global warming, which could radically alter the
environment and biota. At the same time, in both countries, protection regimes are undermined by
institutional weaknesses such as reduced funding for staff salaries and patrolling; and the effects manifest at all levels—strategic planning, day-to-day management, research, and combating illegal activities.

6. Forest Use in the Kyrgyz Republic. Forest ecosystems provide environmental services and
economic benefits to local people. Forests contribute to biodiversity protection by providing habitat for
threatened species and reducing water and wind erosion. Forests are integral to the livelihood systems of rural people, including access to firewood, timber and non-timber forest products, such as nuts, berries, fruits, and medicinal herbs.

7. The importance of forests to rural livelihood is particularly evident in the walnut forests around
Jalalabad, in the southern Kyrgyz Republic, where more than 100,000 people live in villages within or at
the periphery of walnut forest and depend on its resources for their daily subsistence. For example, the
annual walnut harvest yields between 16 to 32 percent of total household revenues (Schmidt 2007).
However the high population density poses a significant threat because overgrazing and illegal cutting are common, and firewood consumption often exceeds forest productive capacity.

8. The Kyrgyz Republic now has around one million ha of forests, half the amount it had prior to
World War II and before unsustainable logging, overgrazing, fuel-wood collection, and fires depleted the
forested areas. The 2007-08 energy crisis increased fuel-wood collection because poor people lacked
alternatives for household heating. According to statistics from the United Nations Food and Agriculture
Organization (FAO), the value of coniferous sawnwood imported by the Kyrgyz Republic in 2006 was
approximately US$9 million (according to local experts this may be underestimated), compared to US$2
million in 2000. Therefore reforestation, afforestation,3 and improved forest management are important
socio-economic and environmental objectives for the Government of Kyrgyz Republic, as stated in the
recent Country Development Strategy.

9. However, state efforts to develop forests are insufficient. From 1998 to 2003, the State Forest
Program forested some 16,400 ha, but with an average survival rate of barely over 10 percent.
Furthermore, 16,400 ha represent less than two percent of the total potential reforestation area, which
exceeds one million ha. Low survival rates are due to three main factors—lack of financial resources,
inadequate technical assistance, and quantitative targets without quality indicators. To implement the
State Forest Program, the Kyrgyz Government covers only personnel administrative costs, not investment
costs for plantation establishment. The low budget allocation of US$25-45 /ha is unrealistic; and no
resources have been allocated for village-level reforestation, where potential for reforestation is high.

10. Governance of natural resources is usually challenging. According to Transparency International,
“There is important evidence to suggest that corruption is a key factor contributing to the degradation of
renewable natural resources.” In the Kyrgyz Republic and Kazakhstan, where overall governance and
institutions are weak and corruption appears to be widespread, illegal activities include, inter alia, illegal
logging, timber theft and smuggling, trade of illegal wood or endangered species, unauthorized forest conversion, and poaching. The exact magnitude of these activities cannot be known. The Kyrgyz
Republic is part of the Improving Forest Law Enforcement and Governance (FLEG) initiative that is
supported by the World Bank, IUCN, and WWF. Both countries ratified the Convention on International
Trade in Endangered Species of Wild Fauna and Flora (CITES).

11. In the Kyrgyz Republic and Kazakhstan, resource users are accustomed to Soviet-era top-down,
centralized decisionmaking and are resistant to community-based collaboration. Collaborating with local
communities in forest and pasture use commonly takes the form of a long-term lease, which has several drawbacks including: (a) participation in planning and decisionmaking continues to be limited and is
largely controlled by the Lezkhozes (LHs, State Forest Enterprises)—not shared with resource users or
other stakeholders; (b) an unrealistic focus on forest preservation and reforestation rather than a more
comprehensive strategy of sustainable forest management; (c) working collectively is limited to small
numbers of households that are already linked by kinship ties and proximity; and (d) stakeholders, such as Aiyl Okmotus (AO, village administration) officials, women’s councils, etc., have accused LHs staff and forest rangers of abusing their power—allocating forest leases based on kinship ties or personal
relationships, favoring previous lease holders or wealthy and influential households. Given the challenge of changing these entrenched attitudes and behaviors, the project will introduce Collaborative Natural
Resources Management (CNRM) in activities where conditions are suitable, such as in collaboration with the Community Development and Investment Agency partly financed by the World Bank Village
Investment Project (ARIS-VIP) and the small grants for ecotourism.

B. Rationale for Bank involvement

13. World Bank involvement is justified by the following: (a) the proposal will build on the
experience of the Central Asia Transboundary Biodiversity Project (CATBP); and (b) the Bank has the
capacity to develop a carbon finance scheme through the BioCarbon Fund, and thus address the main
shortcoming of the CATBP—limited financial sustainability.