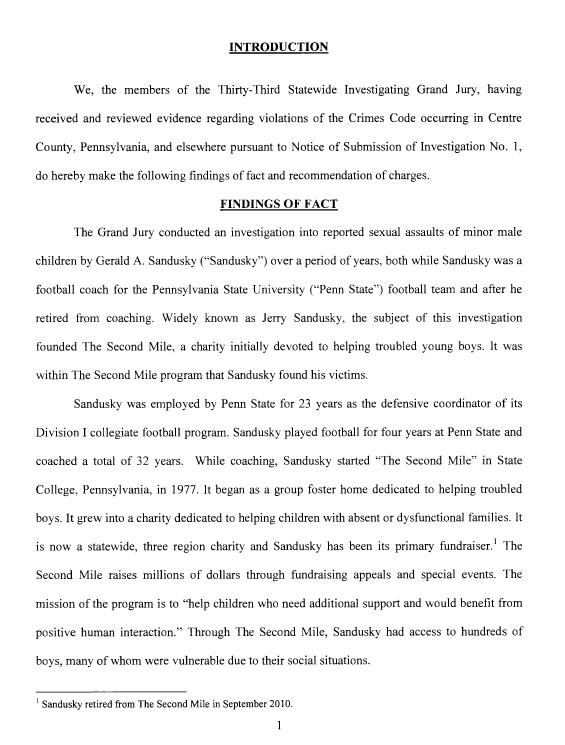 The Grand Jury conducted an investigation into reported sexual assaults of minor male children by Gerald A. Sandusky (“Sandusky”) over a period of years, both while Sandusky was a football coach for the Pennsylvania State University (“Penn State”) football team and after he retired from coaching. Widely known as Jerry Sandusky, the subject of this investigation founded The Second Mile, a charity initially devoted to helping troubled young boys. It was within The Second Mile program that Sandusky found his victims.

Sandusky was employed by Penn State for 23 years as the defensive coordinator of its Division I collegiate football program. Sandusky played football for four years at Penn State and coached a total of 32 years. While coaching, Sandusky started “The Second Mile” in State College, Pennsylvania, in 1977. It began as a group foster home dedicated to helping troubled boys. It grew into a charity dedicated to helping children with absent or dysfunctional families. It is now a statewide, three region charity and Sandusky has been its primary fundraiser. The Second Mile raises millions of dollars through fundraising appeals and special events. The mission of the program is to “help children who need additional support and would benefit from positive human interaction.” Through The Second Mile, Sandusky had access to hundreds of boys, many of whom were vulnerable due to their social situations.

Curley testified that he informed Dr. Jack Raykovitz, Executive Director of the Second Mile of the conduct reported to him and met with Sandusky to advise Sandusky that he was prohibited from bringing youth onto the Penn State campus from that point forward. Curley testified that he met again with the graduate assistant and advised him that Sandusky had been directed not to use Penn State’s athletic facilities with young people and “the information” had been given to director of The Second Mile. Curley testified that he also advised Penn State University President Graham Spanier of the information he had received from the graduate assistant and the steps he had taken as a result. Curley was not specific about the language he used in reporting the 2002 incident to Spanier. Spanier testified to his approval of the approach taken by Curley. Curley did not report the incident to the University Police, the police agency for the University Park campus or any other police agency.

Schultz testified that he was called to a meeting with Joe Paterno and Tim Curley, in which Paterno reported “disturbing” and “inappropriate” conduct in the shower by Sandusky upon a young boy, as reported to him by a student or graduate student. Schultz was present in a subsequent meeting with Curley when the graduate assistant reported the incident in the shower involving Sandusky and a boy. Schultz was very unsure about what he remembered the graduate assistant telling him and Curley about the shower incident. He testified that he had the impression that Sandusky might have inappropriately grabbed the young boy’s genitals while wrestling and agreed that such was inappropriate sexual conduct between a man and a boy. While equivocating on the definition of “sexual” in the context of Sandusky wrestling with and grabbing the genitals of the boy, Schultz conceded that the report the graduate assistant made was of inappropriate sexual conduct by Sandusky. However, Schultz testified that the allegations were “not that serious” and that he and Curley “had no indication that a crime had occurred.” Schultz agreed that sodomy between Sandusky and a child would clearly be inappropriate sexual conduct. He denied having such conduct reported to him either by Paterno or the graduate assistant.