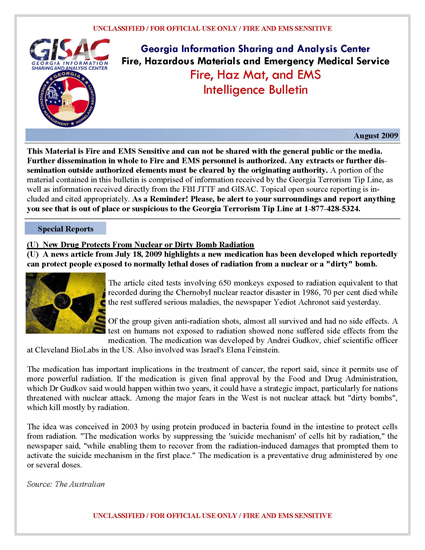 (U) New Drug Protects From Nuclear or Dirty Bomb Radiation

(U) A news article from July 18, 2009 highlights a new medication has been developed which reportedly can protect people exposed to normally lethal doses of radiation from a nuclear or a “dirty” bomb.
The article cited tests involving 650 monkeys exposed to radiation equivalent to that recorded during the Chernobyl nuclear reactor disaster in 1986, 70 per cent died while the rest suffered serious maladies, the newspaper Yediot Achronot said yesterday.

Of the group given anti-radiation shots, almost all survived and had no side effects. A test on humans not exposed to radiation showed none suffered side effects from the medication. The medication was developed by Andrei Gudkov, chief scientific officer at Cleveland BioLabs in the US. Also involved was Israel’s Elena Feinstein.

The medication has important implications in the treatment of cancer, the report said, since it permits use of more powerful radiation. If the medication is given final approval by the Food and Drug Administration, which Dr Gudkov said would happen within two years, it could have a strategic impact, particularly for nations threatened with nuclear attack. Among the major fears in the West is not nuclear attack but “dirty bombs”, which kill mostly by radiation.

The idea was conceived in 2003 by using protein produced in bacteria found in the intestine to protect cells from radiation. “The medication works by suppressing the ‘suicide mechanism’ of cells hit by radiation,” the newspaper said, “while enabling them to recover from the radiation-induced damages that prompted them to activate the suicide mechanism in the first place.” The medication is a preventative drug administered by one or several doses.

(U) A recent National Terror Alert article featured the announcement from Universal Detection Tech-nology about a new product which could save lives.

Universal Detection Technology, a developer of early-warning monitoring technologies to protect people from bioterrorism and other infectious health threats and provider of counter-terrorism con-sulting and training services, reported that its handheld Biodetection kits have been certified by the Department of Homeland Security as an “Approved Product for Homeland Security” under the Support Anti-terrorism by Fostering Effective Technologies (SAFETY) Act of 2002.

The SAFETY Act provides incentives for the development and deployment of anti-terrorism technologies by creating a system of “risk management” and a system of “litigation management.” The purpose of the act is to ensure that the threat of liability does not deter potential manufacturers or sellers of anti-terrorism technologies from developing and commercializing technologies that could save lives.
The handheld detection kits have been extensively used by first responders and private industry throughout the country. The equipment has been evaluated by the U.S. DOD, as well as by the United Kingdom military.

“The size and ease of use of these kits makes them ideal for emergency situations where time is of the es-sence,” says Jacques Tizabi, UNDT’s Chief Executive Officer. “UNDT’s kits are some of the most user friendly and accurate products currently on the market.”

Fire Liaison: GISAC does not endorse any product. This topical open source reporting is included to illustrate the various available equipment and products used for Biological detection.

(U) A recent Reuters article covered the announcement U.S. Home-land Security Secretary Janet Napolitano made on July 29, 2009. In the announcement, Secretary Napolitano called for more public participation to guard against terrorist threats, part of the Obama administration’s strategy to keep the country safe.

The strategy involves cooperation of local law enforcement, the federal government and U.S. allies along with ordinary Americans in a collec-tive fight, she said in a speech to the Council on Foreign Relations.
The country’s counter-terror approach needs to be “more layered, net-worked and resilient to make it smarter, and more adaptive,” her pre-pared text said. Napolitano called for civic awareness and involvement.

“For too long, we’ve treated the public as a liability to be protected rather than an asset in our nation’s collec-tive security.” she said.

“You are the ones who know if something is not right in your communities, such as a suspicious package, or unusual activity,” she said. “We have a much greater chance at success if we strengthen our own networks by enlisting the talents and energies of all Americans.”

She cited the vulnerability of the country’s cyber-network, critical to power grids, the infrastructure and com-merce. Technological advances since the September 11, 2001 attacks on the World Trade Center and Pentagon have created new vulnerabilities. Meanwhile, the enemy had also evolved.

“The terror threat is even more decentralized, more networked, and more adaptive than on 9/11,” she said. “We face a networked enemy, and we must meet it with a networked response.”

Also on Wednesday, Napolitano announced $78 million for new police officers for the country’s transit sys-tems. Some $35 million, will go to New York and will provide for 125 new transit officers focused on terror-ism.

“We can always use more boots on the ground because new York City does remain a prime target for terror-ists,” said New York Mayor Michael Bloomberg who joined Napolitano for the announcement at the city’s Grand Central Station.

Below is a representation of leads reported to the Atlanta FBI Joint Terrorism Task Force (AT FBI JTTF) and the Georgia Information Sharing and Analysis Center (GISAC). The material contained in this bulletin is comprised of information received by the Georgia Terrorism Tip Line, as well as information received directly from the AT FBI JTTF and GISAC. Information is documented by the FBI in the Guardian Threat Tracking System, FBI’s lead tracking system, and GTIP, GISAC and Metro Atlanta’s lead tracking system.

(U//FOUO) In July 2009, a student at a technical college in Metro-Atlanta made concerning and derogatory statements to a professor about his disgust for the United States and belief that the country will soon fall. The professor reported the incident to the Chief of the campus police who notified Law Enforcement authorities. The student was identified and found to have been the subject of a previous tip which was similar in nature but from a different reporting source. The previous tip included the claim that the subject had bomb making materials. The previous tip also stated that the subject had a Commercial Driver’s License with a haz-mat endorsement, but had no known need for one. As a result of the multiple tips, an investigation was opened by Law En-forcement and is ongoing.

(U//FOUO) In July 2009, a subject called Federal Law Enforcement authorities from a mountain state con-cerning his former roommate. The subject stated that three weeks prior, his former roommate made a threat to, “make a chemical weapon.” The identified subject who made the threat is a bio-chemist and has since moved from the mountain state to the coastal region of Georgia. Law Enforcement is investigating this reported threat.

(U//FOUO) In July 2009, two metro bus system employees reported finding two golf cart batteries by a metro transit station. One battery was placed under the third rail of the tracks and another by the catwalk area of the station. A fence nearby appeared as though it had been tampered with. Anyone with information about this in-cident should contact GISAC via the Georgia Terrorism Tip Line at 1-877-428-5324.

(U//FOUO) In July 2009, a state employee noticed a duffel bag and paint cans located beside Interstate 85 near an overpass. When the employee lifted the bag, he saw what appeared to be an explosive device contain-ing long cylinders held together with tape. Law Enforcement authorities responded to the scene. Bomb technicians were able to take x-ray images and schematics of the device before rendering it safe. The device was found to contain NO explosives. Law Enforcement has opened a full investigation into this incident and re-quests anyone with information or similar incidents to report to the Georgia Terrorism Tip Line.

Fire Liaison: While the hoax device contained no explosive material, the incident is of significant concern to law enforcement. The placement of the hoax device near a transportation route suggests an added threat to critical infrastructure and public safety.