The following report was released December 10, 2012 by the National Intelligence Council.  A condensed version of the report is also available (1.17 MB PDF). 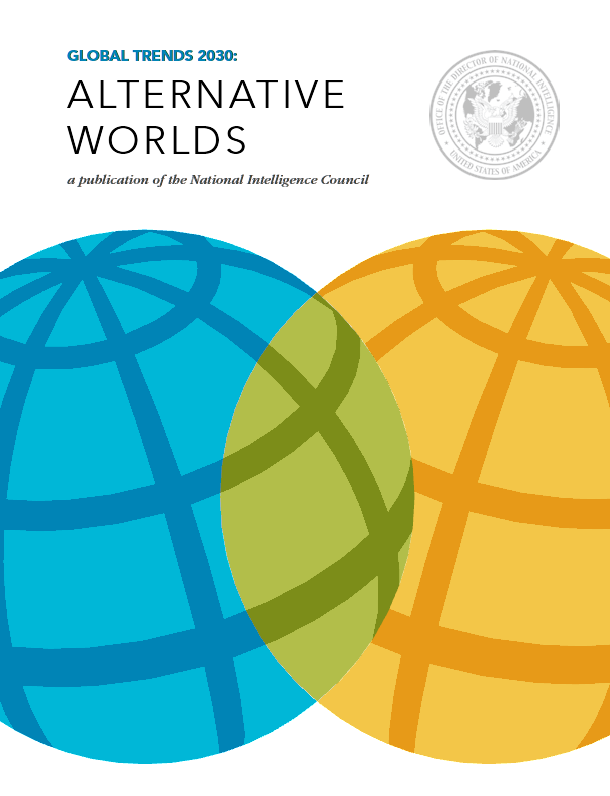 This report is intended to stimulate thinking about the rapid and vast geopolitical changes characterizing the world today and possible global trajectories during the next 15-20 years. As with the NIC’s previous Global Trends reports, we do not seek to predict the future—which would be an impossible feat—but instead provide a framework for thinking about possible futures and their implications.

The world of 2030 will be radically transformed from our world today. By 2030, no country—whether the US, China, or any other large country—will be a hegemonic power. The empowerment of individuals and diffusion of power among states and from states to informal networks will have a dramatic impact, largely reversing the historic rise of the West since 1750, restoring Asia’s weight in the global economy, and ushering in a new era of “democratization” at the international and domestic level. In addition to individual empowerment and the diffusion of state power, we believe that two other megatrends will shape our world out to 2030: demographic patterns, especially rapid aging; and growing resource demands which, in the cases of food and water, might lead to scarcities. These trends, which are virtually certain, exist today, but during the next 15-20 years they will gain much greater momentum. Underpinning the megatrends are tectonic shifts—critical changes to key features of our global environment that will affect how the world “works” (see table on page v).

Extrapolations of the megatrends would alone point to a changed world by 2030—but the world could be transformed in radically different ways. We believe that six key game-changers—questions regarding the global economy, governance, conflict, regional instability, technology, and the role of the United States—will largely determine what kind of transformed world we will inhabit in 2030. Several potential Black Swans—discrete events—would cause large-scale disruption (see page xi). All but two of these—the possibility of a democratic China or a reformed Iran—would have negative repercussions. Based upon what we know about the megatrends and the possible interactions between the megatrends and the game-changers, we have delineated four archetypal futures that represent distinct pathways for the world out to 2030. None of these alternative worlds is inevitable. In reality, the future probably will consist of elements from all the scenarios.

Individual empowerment will accelerate substantially during the next 15-20 years owing to poverty reduction and a huge growth of the global middle class, greater educational attainment, and better health care. The growth of the global middle class constitutes a tectonic shift: for the first time, a majority of the world’s population will not be impoverished, and the middle classes will be the most important social and economic sector in the vast majority of countries around the world. Individual empowerment is the most important megatrend because it is both a cause and effect of most other trends—including the expanding global economy, rapid growth of the developing countries, and widespread exploitation of new communications and manufacturing technologies. On the one hand, we see the potential for greater individual initiative as key to solving the mounting global challenges over the next 15-20 years. On the other hand, in a tectonic shift, individuals and small groups will have greater access to lethal and disruptive technologies (particularly precision-strike capabilities, cyber instruments, and bioterror weaponry), enabling them to perpetrate large-scale violence—a capability formerly the monopoly of states.

The diffusion of power among countries will have a dramatic impact by 2030. Asia will have surpassed North America and Europe combined in terms of global power, based upon GDP, population size, military spending, and technological investment. China alone will probably have the largest economy, surpassing that of the United States a few years before 2030. In a tectonic shift, the health of the global economy increasingly will be linked to how well the developing world does—more so than the traditional West. In addition to China, India, and Brazil, regional players such as Colombia, Indonesia, Nigeria, South Africa, and Turkey will become especially important to the global economy. Meanwhile, the economies of Europe, Japan, and Russia are likely to continue their slow relative declines.

The shift in national power may be overshadowed by an even more fundamental shift in the nature of power. Enabled by communications technologies, power will shift toward multifaceted and amorphous networks that will form to influence state and global actions. Those countries with some of the strongest fundamentals—GDP, population size, etc.—will not be able to punch their weight unless they also learn to operate in networks and coalitions in a multipolar world.

We believe that in the world of 2030—a world in which a growing global population will have reached somewhere close to 8.3 billion people (up from 7.1 billion in 2012)—four demographic trends will fundamentally shape, although not necessarily determine, most countries’ economic and political conditions and relations among countries. These trends are: aging—a tectonic shift for both for the West and increasingly most developing countries; a still-significant but shrinking number of youthful societies and states; migration, which will increasingly be a cross-border issue; and growing urbanization—another tectonic shift, which will spur economic growth but could put new strains on food and water resources. Aging countries will face an uphill battle in maintaining their living standards. Demand for both skilled and unskilled labor will spur global migration. Owing to rapid urbanization in the developing world, the volume of urban construction for housing, office space, and transport services over the next 40 years could roughly equal the entire volume of such construction to date in world history.

Demand for food, water, and energy will grow by approximately 35, 40, and 50 percent respectively owing to an increase in the global population and the consumption patterns of an expanding middle class. Climate change will worsen the outlook for the availability of these critical resources. Climate change analysis suggests that the severity of existing weather patterns will intensify, with wet areas getting wetter and dry and arid areas becoming more so. Much of the decline in precipitation will occur in the Middle East and northern Africa as well as western Central Asia, southern Europe, southern Africa, and the US Southwest.

We are not necessarily headed into a world of scarcities, but policymakers and their private sector partners will need to be proactive to avoid such a future. Many countries probably won’t have the wherewithal to avoid food and water shortages without massive help from outside. Tackling problems pertaining to one commodity won’t be possible without affecting supply and demand for the others. Agriculture is highly dependent on accessibility to adequate sources of water as well as on energy-rich fertilizers. Hydropower is a significant source of energy for some regions while new sources of energy—such as biofuels—threaten to exacerbate the potential for food shortages. There is as much scope for negative tradeoffs as there is the potential for positive synergies. Agricultural productivity in Africa, particularly, will require a sea change to avoid shortages. Unlike Asia and South America, which have achieved significant improvements in agricultural production per capita, Africa has only recently returned to 1970s’ levels. 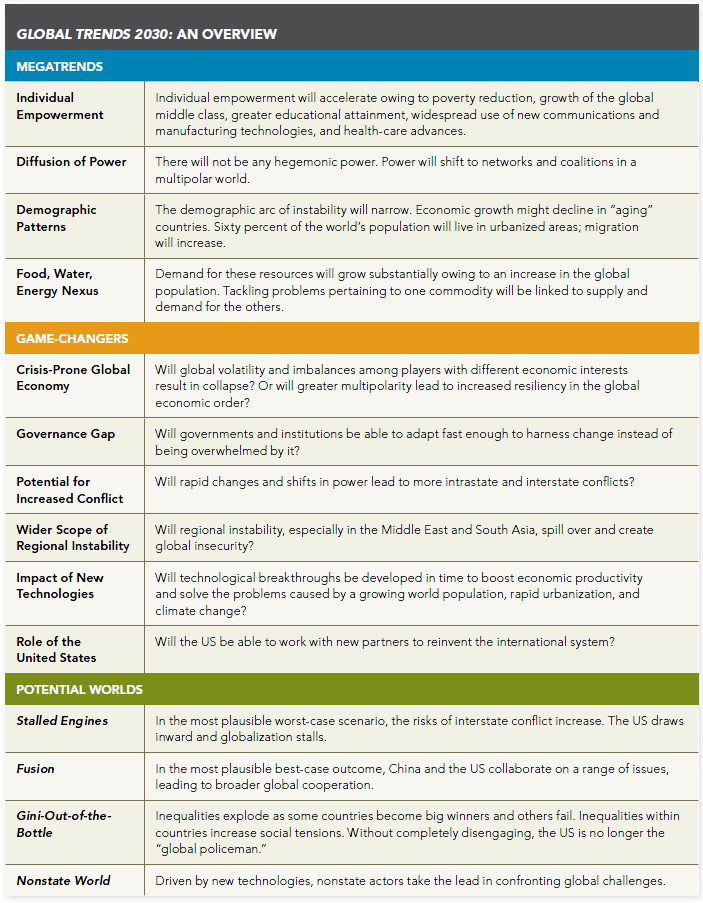