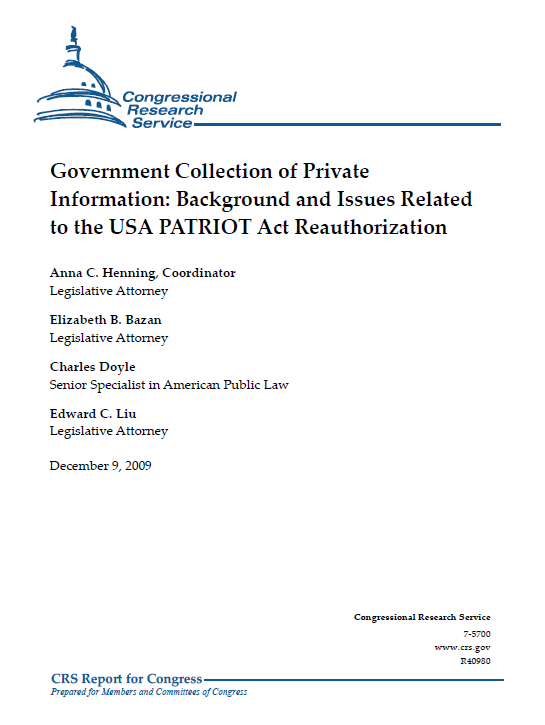 Shortly after the 9/11 terrorist attacks, Congress enacted the USA PATRIOT Act, in part, to “provid[e] enhanced investigative tools” to “assist in the prevention of future terrorist activities and the preliminary acts and crimes which further such activities.” To that end, the Act eased restrictions on the government’s ability to collect information regarding people’s activities and conversations, both in domestic criminal investigations and in the realms of foreign intelligence gathering and national security. The changes are perceived by many to be necessary in light of the new breed of threats in a post-9/11 world. The expanded authorities also prompted concerns regarding the appropriate balance between national security interests and civil liberties. In part for that reason, the changes were revisited and modified in subsequent measures.

Several pending legislative proposals would further adjust USA PATRIOT Act provisions and
related authorities for the government’s collection of private information. Examples of relevant
bills include the USA PATRIOT Act Sunset Extension Act of 2009 (S. 1692) and the USA
PATRIOT Amendments Act of 2009 (H.R. 3845), which were reported or ordered to be reported
from their respective judiciary committees.

The current legislative debate is catalyzed, in part, by a sunset date of December 31, 2009, for
three amendments which expanded authorities for the collection of foreign intelligence
information.6 However, pending bills cover a range of authorities expanded by the USA
PATRIOT Act in addition to the expiring provisions.

This report discusses the history of constitutional interpretations and legislative responses
relevant to the collection of private information for criminal investigation, foreign intelligence
gathering, and national security purposes. Next, it summarizes the relevant statutory frameworks
and changes made by the USA PATRIOT Act and subsequent measures. It then examines
congressional oversight, judicial review, and “minimization procedures” designed to limit the extent of government intrusions where possible. Finally, it discusses several related matters likely to play a role in the legislative debate surrounding reauthorization of the expiring provisions.

Lowering of the Wall Between Criminal Investigations and Foreign Intelligence Gathering

The USA PATRIOT Act lowered somewhat the wall traditionally separating criminal
investigation from foreign intelligence gathering. Prior to the Act, FISA required that foreign
intelligence gathering be the sole or primary purpose of an investigation; thus, activities
conducted with an additional rationale of criminal investigation were required to adhere to
criminal procedure requirements. Section 218 of the Act amended the standard to require that
foreign intelligence gathering be a “significant” rather than “the [sole]” purpose of surveillance or
a search for which a court order is sought under FISA.87 Thus, the presence of ancillary criminal
investigation purposes no longer eliminates the ability to rely on FISA authorities, so long as a
significant foreign intelligence purpose also exists. Relatedly, as discussed infra, the USA
PATRIOT Act and subsequent measures increased the scope of international terrorism-related
activities which now fall within the ambit of the federal criminal code.

The Act also attempted to improve communication between foreign intelligence and criminal law
enforcement agencies. To that end, it includes several provisions that authorize information
sharing. For example, section 504 authorizes federal officers to consult with criminal law
enforcement officers regarding information obtained from a physical search in order “to
coordinate efforts to investigate or protect against” various national security threats.