Hezbollah: Background and Issues for Congress 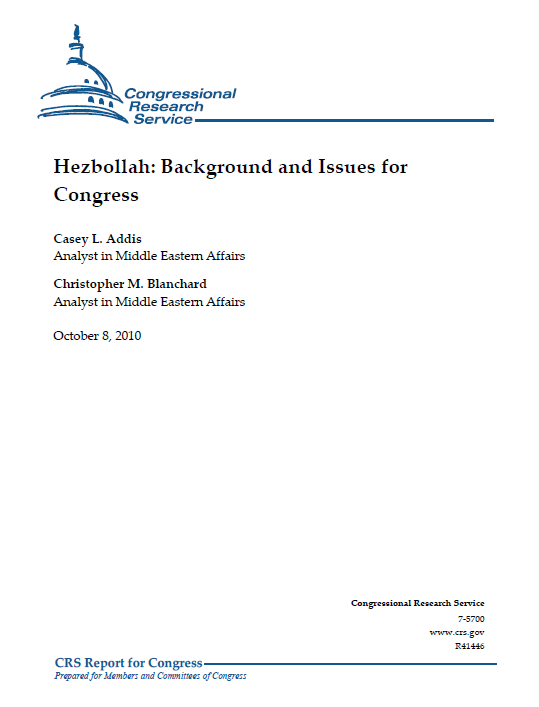 Lebanon’s Hezbollah is a Shiite Islamist militia, political party, social welfare organization, and U.S. State Department-designated terrorist organization. Its armed element receives support from Iran and Syria and possesses significant paramilitary and unconventional warfare capabilities. In the wake of the summer 2006 war between Israel and Hezbollah and an armed domestic confrontation between Hezbollah and rival Lebanese groups in May 2008, Lebanon’s political process is now intensely focused on Hezbollah’s future role in the country. Lebanese factions are working to define Hezbollah’s role through a series of “National Dialogue” discussions.

Hezbollah and other Lebanese political parties have long emphasized the need to assert control over remaining disputed areas with Israel. However, current Hezbollah policy statements suggest that, even if disputed areas were secured, the group would seek to maintain a role for “the resistance” in providing for Lebanon’s national defense and would resist any Lebanese or international efforts to disarm it. Hezbollah continues to define itself primarily as a resistance movement and remains viscerally opposed to what it views as illegitimate U.S. and Israeli intervention in Lebanese and regional affairs. It categorically refuses to recognize Israel’s right to exist and opposes all concluded and pending efforts to negotiate resolutions to Arab-Israeli disputes on the basis of mutual recognition, including the Israeli-Palestinian conflict.

Given these positions, most observers believe that prospects for accommodation and engagement between the United States and Hezbollah are slim, even as the group’s close relationships with Syria and Iran, its pivotal role in Lebanese politics, and reinvigorated U.S. engagement in regional peace efforts increase Hezbollah’s potential influence over stated U.S. national security objectives. The Obama Administration is requesting $246 million in FY2011 foreign assistance to continue a multi-year program specifically designed to increase the central authority of the Lebanese state and deter the use of force by non-state actors. Since FY2006, the United States has provided more than $1.35 billion in assistance for Lebanon. Key issues facing U.S. policy makers and Members of Congress include:

• Assessing the goals and effectiveness of U.S. assistance programs—Assessing
the goals of U.S. assistance to the Lebanese Armed Forces (LAF) and Internal
Security Forces (ISF) and deciding whether to tailor pending assistance programs
to create or improve them. Understanding the key political and organizational
obstacles to the further expansion or improvement of Lebanon’s security forces
and developing strategies to overcome them.
• Managing relations with other external actors—Preventing destabilizing
actions by regional parties that could renew conflict. Limiting the transfer of
sophisticated weaponry to Hezbollah. Recognizing and seizing opportunities for
the United States and its allies to influence the decisions of regional actors in
support of U.S. objectives in Lebanon.
• Influencing Lebanon’s National Dialogue—Determining the preferred versus
likely outcomes of the current Lebanese National Dialogue discussions about a
national defense strategy and Hezbollah’s weapons. Deciding if and how the
United States should seek to influence these discussions and identifying potential
pitfalls. Preparing for potential negative consequences including the potential for
return to civil conflict in Lebanon.