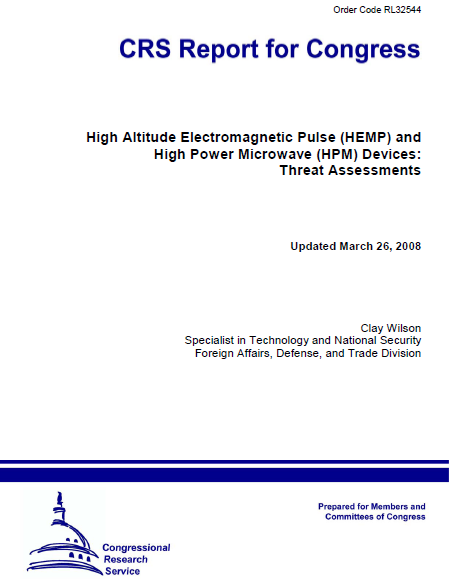 Electromagnetic Pulse (EMP) is an instantaneous, intense energy field that can overload or disrupt at a distance numerous electrical systems and high technology microcircuits, which are especially sensitive to power surges. A large scale EMP effect can be produced by a single nuclear explosion detonated high in the atmosphere. This method is referred to as High-Altitude EMP (HEMP). A similar, smaller-scale EMP effect can be created using non-nuclear devices with powerful batteries or reactive chemicals. This method is called High Power Microwave
(HPM). Several nations, including reported sponsors of terrorism, may currently have a capability to use EMP as a weapon for cyber warfare or cyber terrorism to disrupt communications and other parts of the U.S. critical infrastructure. Also, some equipment and weapons used by the U.S. military may be vulnerable to the effects of EMP.

The threat of an EMP attack against the United States is hard to assess, but some
observers indicate that it is growing along with worldwide access to newer
technologies and the proliferation of nuclear weapons. In the past, the threat of
mutually assured destruction provided a lasting deterrent against the exchange of
multiple high-yield nuclear warheads. However, now even a single, speciallydesigned
low-yield nuclear explosion high above the United States, or over a
battlefield, can produce a large-scale EMP effect that could result in a widespread
loss of electronics, but no direct fatalities, and may not necessarily evoke a large
nuclear retaliatory strike by the U.S. military. This, coupled with the possible
vulnerability of U.S. commercial electronics and U.S. military battlefield equipment
to the effects of EMP, may create a new incentive for other countries to develop or
acquire a nuclear capability.

Policy issues raised by this threat include (1) what is the United States doing to
protect civilian critical infrastructure systems against the threat of EMP, (2) how does
the vulnerability of U.S. civilian and military electronics to EMP attack encourage
other nations to develop or acquire nuclear weapons, and (3) how likely are terrorist
organizations to launch a smaller-scale EMP attack against the United States?

Electromagnetic energy, characterized as weapon potentially threatening to
national security, can be created as a pulse traditionally by two methods: overhead
nuclear burst and microwave emission. High-Altitude Electromagnetic Pulse
(HEMP) is an instantaneous electromagnetic energy field produced in the atmosphere
by the power and radiation of a nuclear explosion, and that is damaging to electronic
equipment over a very wide area, depending on the design of the nuclear device and
altitude of the burst. High-Power Microwave (HPM) electromagnetic energy can be produced as an instantaneous pulse created through special electrical equipment that transforms battery power, or powerful chemical reaction or explosion, into intense
microwaves that are very damaging to electronics within a much smaller area.
In addition, while HEMP weapons are large in scale and require a nuclear
capability along with technology to launch high altitude missiles, HPM weapons are
smaller in scale, and can sometimes involve a much lower level of technology, which
may be within the capability of some extremist groups or non-state organizations.
HPM can cause damage to computers similar to HEMP, although the effects are
limited to a much smaller area. The technical accessibility, lower cost, and the
apparent vulnerability of U.S. civilian electronic equipment could make small-scale
HPM weapons attractive for terrorist groups in the future.
Description of High-Altitude Electromagnetic Pulse

HEMP is produced when a nuclear weapon is detonated high above the Earth’s
surface, creating gamma-radiation that interacts with the atmosphere to create an
instantaneous intense electromagnetic energy field that is harmless to people as it
radiates outward, but which can overload computer circuitry with effects similar to,
but causing damage much more swiftly than a lightning strike.13 The effects of
HEMP became fully known to the United States in 1962 during a high-altitude
nuclear test (code named “Starfish Prime”) over the Pacific Ocean, when radio
stations and electronic equipment were disrupted 800 miles away through parts of
Hawaii. The HEMP effect can span thousands of miles, depending on the altitude
and the design and power of the nuclear burst (a single device detonated at an
appropriate altitude over Kansas reportedly could affect all of the continental United
States)14, and can be picked up by metallic conductors such as wires or power cables,
acting as antennas to conduct the energy shockwave into the electronic systems of
cars, airplanes, and communications equipment.