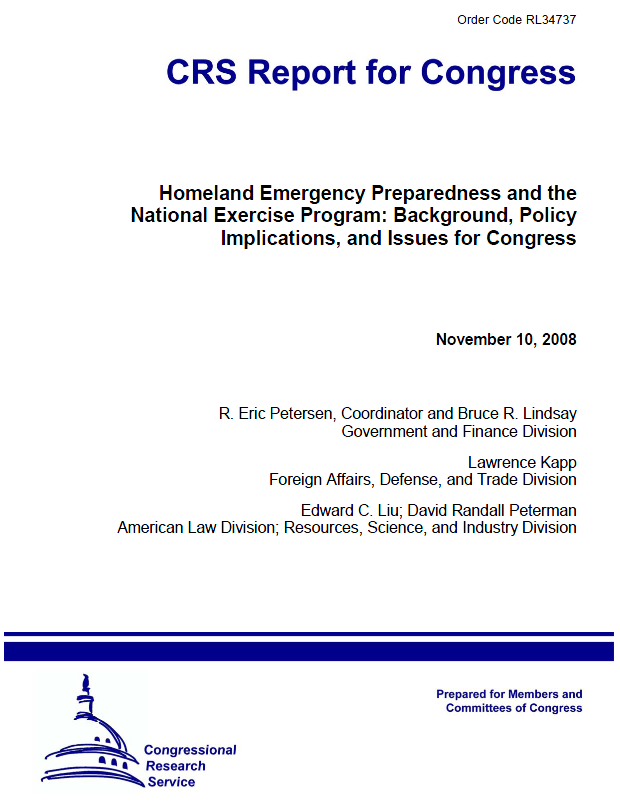 An emergency preparedness and response program provides resources and support to individuals and communities that might be affected by a broad range of
disruptive incidents. These incidents may be caused by natural phenomena such as severe weather, fires, earthquakes, tsunamis, or disease outbreaks. Incidents might
result from human activity as well, and could include accidents, criminal acts, terrorism, or other attacks. Concerns have been raised whether current preparedness
and response policies and capacities are sufficient.

The effectiveness of preparedness doctrine may be demonstrated through
responses to real incidents, or through exercises that practice and refine responses to
a variety of potential disruptions. Exercises might demonstrate that responders have
the capacity to respond effectively to an incident, or identify areas in which
improvement is necessary. Lessons learned from an exercise may provide insights
to guide future planning for securing the nation against terrorist attacks, disasters, and
other emergencies. More broadly, emergency preparedness exercise programs may
provide insights about the efficacy of the government policies establishing
responsibilities within agencies, and whether those policies, organizational structures,
and processes adequately ensure the safety and security of public institutions, critical
infrastructures, and American citizens.

Current homeland emergency preparedness exercises, carried out through
authorities that created the National Exercise Program (NEP), evaluate and adapt an
integrated, interagency federal, state, territorial, local, and private sector capability
to prevent terrorist attacks, and to rapidly and effectively respond to, and recover
from, any terrorist attack or major disaster that occurs. This report, which will be
updated as warranted, provides an overview of emergency preparedness authorities
and guidance; development and management of the NEP; and current exercise
planning, scheduling, and evaluation processes. Additionally, it provides analysis of
national preparedness policy issues and exercise operations issues that Congress
might wish to consider. Legal authorities to conduct national level exercises and
preparedness exercises in general are provided in Appendix A. Since homeland
preparedness activities are typically addressed by planners and practitioners who use
specialized terms and abbreviations, Appendix B lists all acronyms used in this
report together with their meaning.

Historically, military exercises have been designed, planned, executed, and
evaluated primarily by the individual military services; but in recent decades there
has been greater emphasis on joint exercises, which involve two or more services.
DOD participation in the NEP will normally occur as a joint military exercise linked
to an NEP event. Doctrine and guidance for the conduct of joint military exercises
is contained in several key documents. Of particular importance are Chairman of the
Joint Chiefs of Staff Instruction (CJCSI) 3500.01D, Joint Training Policy, which
establishes policy for planning and conducting joint training (which includes
exercises), and Chairman of the Joint Chiefs of Staff Manual (CJCSM) 3500.03B
Joint Training Manual for the Armed Forces of the United States, which provides
guidance to Combatant Commanders on implementing policies for planning and
conducting joint training. While the military’s joint doctrine differs somewhat from
the HSEEP method, there are deep similarities between them because the latter was
heavily influenced by the former.

Role of DOD in NEP Events. NEP events are intended to focus “principally
on domestic incident management, either for terrorism or non-terrorist catastrophic
events.”49 In the event of such an incident, there are two principal areas in which
DOD would play a significant role in the overall response: homeland defense
operations and civil support operations. DOD defines homeland defense as “The
protection of United States sovereignty, territory, domestic population, and critical
defense infrastructure against external threats and aggression or other threats as
directed by the President.”50 Within the context of the NEP, this homeland defense
capability might be exercised through scenarios that include a pending terrorist attack
(for example, interdicting ships containing radiological material before they arrived
at an American port, or intercepting an explosives-laden aircraft). DOD defines civil
support as “Department of Defense support to US civil authorities for domestic
emergencies, and for designated law enforcement and other activities.”51 Civil
support missions include assisting civil authorities in their response to manmade and
natural disasters, supporting public health, and maintaining civil order. Within the context of the NEP, DOD’s civil support capability might be exercised through
scenarios that include the national response to a completed terrorist attack or a
catastrophic disaster (for example, assisting with medical evacuation of injured
people, or providing personnel and equipment to conduct search and rescue
missions).

At the policy level, DOD is directly involved in the ongoing development,
coordination, and execution of the NEP.52 It has representatives from both the Office
of the Secretary of Defense (OSD) and the Joint Staff (J7)53 on the DRG E&E Sub-
PCC, which makes recommendations on exercise priorities, schedules, and corrective
action. DOD also has OSD and J7 representatives on the NEP ESC, which
coordinates the NEP at the staff level. Twice a year, DOD conducts a Worldwide
Joint Training and Scheduling Conference (WJTSC) which coordinates exercise
plans and schedules from the Combatant Commands. The finalized results of these
conferences are submitted in December of each year to DHS for inclusion in the
National Exercise Schedule. In this manner, the timing of many large-scale DOD
exercises has been synchronized with NEP generally, and particularly the NLEs.

Exercise evaluations conducted by Department of Defense organizations will
typically be conducted in accordance with individual service or joint doctrine,
depending on whether the organization or activities being evaluated are servicespecific
or multi-service. The HSEEP method is only used to evaluate interagency
activities. To illustrate this, the process used by USNORTHCOM to collect,
evaluate, and forward data to other agencies and the Joint Staff is outlined below.
The final paragraph addresses the unique situation of the National Guard.

One of the primary DOD organizations to participate in NLEs at the operational
level is USNORTHCOM. USNORTHCOM follows a structured process to evaluate
the command’s performance after both exercises and operations. During exercises,
observations and findings are collected by dedicated observers and from submissions
provided voluntarily by other exercise participants. The dedicated observers are
subject matter experts in the areas they are assigned to watch. Their task is to both
look for general “lessons” and to assess mission performance in order to help
commanders evaluate the quality of training received during an exercise. Observers
also validate the effectiveness of specific corrective actions implemented since the
last exercise or operational event. Exercise participants have access to a web-based
lessons-learned application that allows review of past lessons and entry of new
observations. USNORTHCOM holds “hot wash” meetings after major events to
discuss and consolidate lessons learned. For exercises, these are held after
completion of an exercise at a variety of levels before the commander and his or her
staff conduct a formal after action review. A “quick look” report is compiled within
30 days of exercise completion to describe the exercise and initial internal results.
A more comprehensive report, which includes observations and reports from
participating organizations, is compiled within 90 days of exercise completion.
Requests for corrective actions are coordinated through USNORTHCOM
headquarters where they are entered into a lessons-learned database, assigned an
Office of Primary Responsibility to implement necessary corrective action, and
tracked until all required corrective actions are completed. For findings that require
involvement of organizations outside USNORTHCOM, the headquarters will draft
and send a message to the involved agency requesting the action needed.