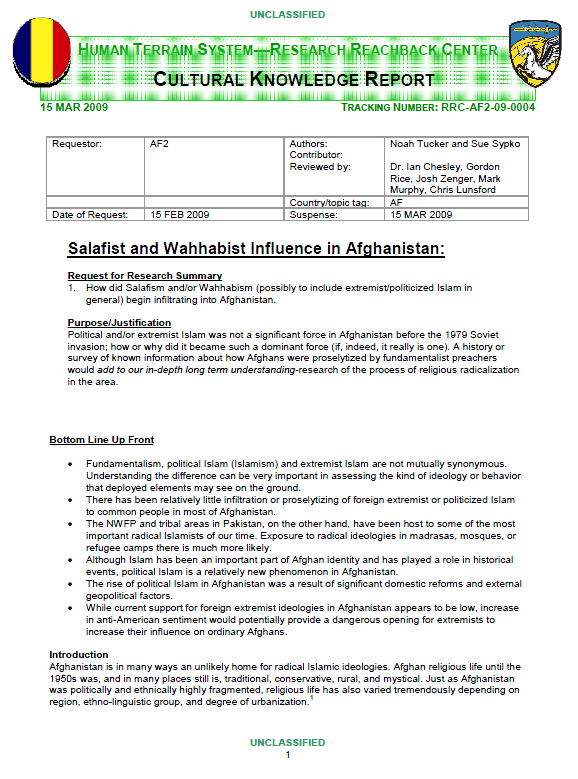 · Fundamentalism, political Islam (Islamism) and extremist Islam are not mutually synonymous. Understanding the difference can be very important in assessing the kind of ideology or behavior that deployed elements may see on the ground.
· There has been relatively little infiltration or proselytizing of foreign extremist or politicized Islam to common people in most of Afghanistan.
· The NWFP and tribal areas in Pakistan, on the other hand, have been host to some of the most important radical Islamists of our time. Exposure to radical ideologies in madrasas, mosques, or refugee camps there is much more likely.
· Although Islam has been an important part of Afghan identity and has played a role in historical events, political Islam is a relatively new phenomenon in Afghanistan.
· The rise of political Islam in Afghanistan was a result of significant domestic reforms and external geopolitical factors.
· While current support for foreign extremist ideologies in Afghanistan appears to be low, increase in anti-American sentiment would potentially provide a dangerous opening for extremists to increase their influence on ordinary Afghans.

Afghanistan is in many ways an unlikely home for radical Islamic ideologies. Afghan religious life until the 1950s was, and in many places still is, traditional, conservative, rural, and mystical. Just as Afghanistan
was politically and ethnically highly fragmented, religious life has also varied tremendously depending on region, ethno-linguistic group, and degree of urbanization.

From 1979 onwards, however, radical upheaval of traditional society caused by the Communist revolution and the invasion of a major world power made Afghanistan suddenly the focal point of an international
Islamist movement. This movement advocating “political Islam” had formed as a response to colonialism that Afghanistan had never before experienced. The international Islamist movement with roots in Egypt, Saudi Arabia, Pakistan and Iran was completely foreign and as disunited and fragmented as Afghan society. Made up of often contradictory and competing doctrines, it was (and is) a constantly changing loose coalition of groups that unite and splinter in cycles around leaders and ideas in perpetual competition with one another for funding and recruits.
The extreme social, political, and religious fragmentation of both Afghan society and the Islamist movement makes the task of constructing a cohesive narrative about Islamism in Afghanistan a nearly impossible one. This report can only attempt to be an introduction to the issue, a broad overview that should allow the reader to begin to differentiate between various groups and ideologies that have competed for loyalty and ultimately for power in Afghanistan. Some of these groups hoped to use Afghanistan as a springboard for broad social transformation that would affect the whole Muslim world and change the entire geopolitical order; others never aspired to anything more than the creation of a small fiefdom in a single remote valley.