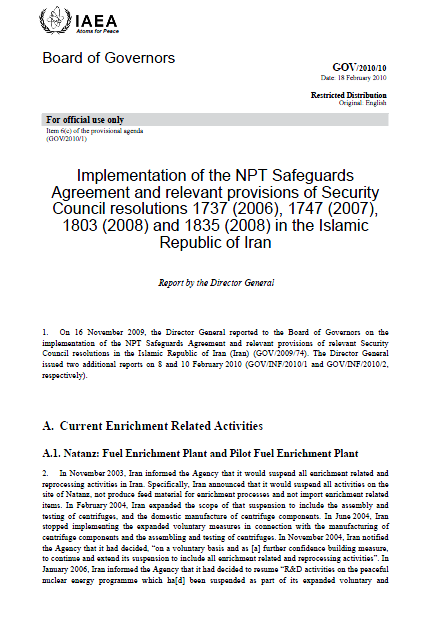 40. In order to confirm, as required by the Safeguards Agreement, that all nuclear material in Iran is in peaceful activities, the Agency needs to have confidence in the absence of possible military dimensions to Iran’s nuclear programme. Previous reports by the Director General have detailed the outstanding issues and the actions required of Iran,12 including, inter alia, that Iran implement the Additional Protocol and provide the Agency with the information and access necessary to: resolve questions related to the alleged studies; clarify the circumstances of the acquisition of the uranium metal document; clarify procurement and R&D activities of military related institutes and companies that could be nuclear related; and clarify the production of nuclear related equipment and components by companies belonging to the defence industries.

41. The information available to the Agency in connection with these outstanding issues is extensive and has been collected from a variety of sources over time. It is also broadly consistent and credible in terms of the technical detail, the time frame in which the activities were conducted and the people and organizations involved. Altogether, this raises concerns about the possible existence in Iran of past or current undisclosed activities related to the development of a nuclear payload for a missile. These alleged activities consist of a number of projects and sub-projects, covering nuclear and missile related aspects, run by military related organizations.

42. Among the activities which the Agency has attempted to discuss with Iran are: activities
involving high precision detonators fired simultaneously; studies on the initiation of high explosives
and missile re-entry body engineering; a project for the conversion of UO2 to UF4, known as “the
green salt project”; and various procurement related activities. Specifically, the Agency has, inter alia,
sought clarification of the following: whether Iran was engaged in undeclared activities for the
production of UF4 (green salt) involving the Kimia Maadan company; whether Iran’s exploding
bridgewire detonator activities were solely for civil or conventional military purposes; whether Iran
developed a spherical implosion system, possibly with the assistance of a foreign expert
knowledgeable in explosives technology; whether the engineering design and computer modelling
studies aimed at producing a new design for the payload chamber of a missile were for a nuclear
payload; and the relationship between various attempts by senior Iranian officials with links to military
organizations in Iran to obtain nuclear related technology and equipment.

43. The Agency would also like to discuss with Iran: the project and management structure of alleged
activities related to nuclear explosives; nuclear related safety arrangements for a number of the alleged
projects; details relating to the manufacture of components for high explosives initiation systems; and
experiments concerning the generation and detection of neutrons. Addressing these issues is important
for clarifying the Agency’s concerns about these activities and those described above, which seem to
have continued beyond 2004.

44. Since August 2008, Iran has declined to discuss the above issues with the Agency or to provide
any further information and access (to locations and/or people) to address these concerns, asserting
that the allegations relating to possible military dimensions to its nuclear programme are baseless and
that the information to which the Agency is referring is based on forgeries.

45. With the passage of time and the possible deterioration in the availability of information, it is
important that Iran engage with the Agency on these issues, and that the Agency be permitted to visit
all relevant sites, have access to all relevant equipment and documentation, and be allowed to
interview relevant persons, without further delay. Iran’s substantive engagement would enable the
Agency to make progress in its work. Through Iran’s active cooperation, progress has been made in
the past in certain other areas where questions have been raised; this should also be possible in
connection with questions about military related dimensions.

2. In November 2003, Iran informed the Agency that it would suspend all enrichment related and
reprocessing activities in Iran. Specifically, Iran announced that it would suspend all activities on the
site of Natanz, not produce feed material for enrichment processes and not import enrichment related
items. In February 2004, Iran expanded the scope of that suspension to include the assembly and
testing of centrifuges, and the domestic manufacture of centrifuge components. In June 2004, Iran
stopped implementing the expanded voluntary measures in connection with the manufacturing of
centrifuge components and the assembling and testing of centrifuges. In November 2004, Iran notified
the Agency that it had decided, “on a voluntary basis and as [a] further confidence building measure,
to continue and extend its suspension to include all enrichment related and reprocessing activities”. In
January 2006, Iran informed the Agency that it had decided to resume “R&D activities on the peaceful
nuclear energy programme which ha[d] been suspended as part of its expanded voluntary and
Atoms for Peace non-legally binding suspension”, which included the activities carried out at the Fuel Enrichment Plant
(FEP) and the Pilot Fuel Enrichment Plant (PFEP) located at Natanz. Iran restarted enrichment tests at
PFEP in February 2006; FEP was put into operation in February 2007.

5. Between 21 November 2009 and 2 December 2009, the Agency conducted a physical inventory
verification (PIV) at FEP and verified that, as of 22 November 2009, 21 140 kg of natural UF6 had
been fed into the cascades since February 2007, and a total of 1808 kg of low enriched UF6 had been
produced. The enrichment level of the low enriched UF6 product, as measured by the Agency, was
3.47% U-235. The Agency is continuing with its assessment of the PIV and is discussing the results
with Iran. Iran has estimated that, between 23 November 2009 and 29 January 2010, it produced an
additional 257 kg of low enriched UF6,2 which would result in a total production of 2065 kg of low
enriched UF6 since the startup of FEP. The nuclear material at FEP (including the feed, product and
tails), as well as all installed cascades and the feed and withdrawal stations, are subject to Agency
containment and surveillance.3

6. The results of the environmental samples taken at FEP as of 21 November 2009 indicate that the
maximum enrichment level as declared by Iran in the relevant Design Information Questionnaire
(DIQ) (i.e. less than 5.0% U-235 enrichment) has not been exceeded at that plant.4 Since the last
report, the Agency has successfully conducted 4 unannounced inspections at FEP, making a total of 35
such inspections since March 2007.

7. Between 14 and 16 September 2009, the Agency conducted a PIV at the PFEP, the results of
which confirmed the inventory as declared by Iran, within the measurement uncertainties normally
associated with such a facility. Between 28 October 2009 and 2 February 2010, a total of
approximately 113 kg of natural UF6 was fed into a 10-machine IR-2m cascade, a 10-machine IR-4
cascade, a 20-machine IR-2m cascade and single IR-1, IR-2, IR-2m and IR-4 centrifuges at PFEP.

47. Iran is not implementing the requirements contained in the relevant resolutions of the Board of
Governors and the Security Council, including implementation of the Additional Protocol, which are
essential to building confidence in the exclusively peaceful purpose of its nuclear programme and to
resolve outstanding questions. In particular, Iran needs to cooperate in clarifying outstanding issues
which give rise to concerns about possible military dimensions to Iran’s nuclear programme, and to
implement the modified text of Code 3.1 of the Subsidiary Arrangements General Part on the early
provision of design information.

48. Contrary to the relevant resolutions of the Board of Governors and the Security Council, Iran has
continued with the operation of PFEP and FEP at Natanz, and the construction of a new enrichment
plant at Fordow. Iran has also announced the intention to build ten new enrichment plants. Iran
recently began feeding low enriched UF6 produced at FEP into one cascade of PFEP with the aim of
enriching it up to 20% in U-235. The period of notice provided by Iran regarding related changes
made to PFEP was insufficient for the Agency to adjust the existing safeguards procedures before Iran
started to feed the material into PFEP. The Agency’s work to verify FFEP and to understand the
original purpose of the facility and the chronology of its design and construction remain ongoing. Iran
is not providing access to information such as the original design documentation for FFEP or access to
companies involved in the design and construction of the plant.

49. Contrary to the relevant resolutions of the Board of Governors and the Security Council, Iran has
also continued with the construction of the IR-40 reactor and related heavy water activities. The
Agency has not been permitted to take samples of the heavy water which is stored at UCF, and has not
been provided with access to the Heavy Water Production Plant.

51. The Director General will continue to report as appropriate.