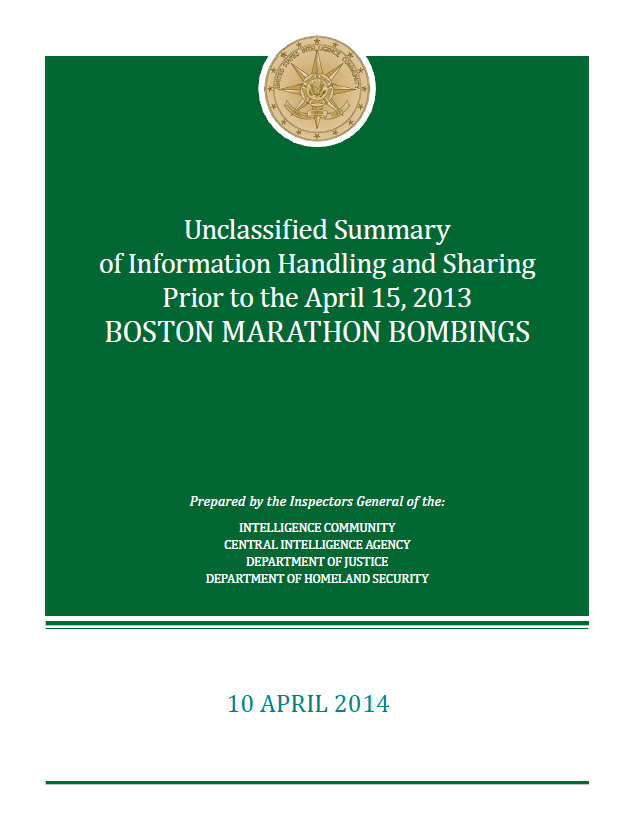 Unclassified Summary of Information Handling and Sharing Prior to the April 15, 2013 Boston Marathon Bombings

On April 15, 2013, two pressure cooker bombs placed near the finish line of the Boston Marathon detonated within seconds of each other, killing three and injuring more than two hundred people. Law enforcement officials identified brothers Tamerlan and Dzhokhar Tsarnaev as primary suspects in the bombings. After an extensive search for the then-unidentified suspects, law enforcement officials encountered Tamerlan and Dzhokhar Tsarnaev in Watertown, Massachusetts. Tamerlan Tsarnaev was shot during the encounter and was pronounced dead shortly thereafter. Dzhokhar Tsarnaev, who fled the scene, was apprehended the following day and remains in federal custody.

Two years before the Boston Marathon bombings, Tamerlan Tsarnaev and Zubeidat Tsarnaeva came to the attention of the Federal Bureau of Investigation (FBI) based on information received from the Russian Federal Security Service (FSB). In March 2011, the FBI received information from the FSB alleging that Tamerlan Tsarnaev and Zubeidat Tsarnaeva were adherents of radical Islam and that Tamerlan Tsarnaev was preparing to travel to Russia to join unspecified underground groups in Dagestan and Chechnya. The FBI-led Joint Terrorism Task Force in Boston (Boston JTTF) conducted an assessment of Tamerlan Tsarnaev to determine whether he posed a threat to national security and closed the assessment three months later having found no link or “nexus” to terrorism.

Three months later, Tamerlan Tsarnaev traveled to Russia, as the lead information stated he was preparing to do. However, Tsarnaev’s travel to Russia did not prompt additional investigative steps to determine whether he posed a threat to national security.

By April 19, 2013, after the Tsarnaev brothers were identified as suspects in the bombings, the FBI reviewed its records and determined that in early 2011 it had received lead information from the FSB about Tamerlan Tsarnaev, had conducted an assessment of him, and had closed the assessment after finding no link or “nexus” to terrorism. In the days that followed, Members of Congress asked questions of the Director of the FBI, the Director of National Intelligence (DNI), and other government officials about the handling of information concerning Tamerlan Tsarnaev prior to the bombings. The Intelligence Community Inspectors General Forum, with the support of the DNI, determined that the Inspectors General of the Intelligence Community, the CIA, the Department of Justice (DOJ), and DHS would conduct a coordinated review of the handling and sharing of information available to the U.S. government prior to the Boston Marathon bombings. The Inspectors General issued a public announcement of a coordinated, independent review on April 30, 2013.