This Privacy Impact Assessment (PIA) released by the Department of Homeland Security discusses the Security Management CCTV System used in Immigration and Customs Enforcement (ICE) facilities around the United States.  When the text is carefully parsed, the assessment contains a significant amount of information regarding the standard locations, capabilities, and limitations of cameras used in ICE facilities. 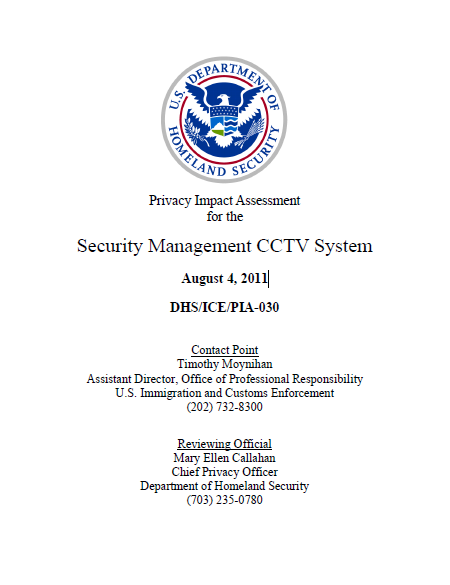 ICE’s Office of Professional Responsibility (OPR), Security Management Unit (SMU) operates the Security Management System (SMS), of which the SM-CCTV System is one component, in support of its mission to protect ICE facilities across the United States. SMS is designed to coordinate access control, intrusion detection, and video surveillance at ICE facilities. In addition to the SM-CCTV System, SMS includes two other components: one for visitor management and another for physical access control and physical intrusion detection. This PIA only addresses the video surveillance portion of SMS: the SM-CCTV System. The remaining components of SMS are covered by the DHS Physical Access Control System PIA.

Access to video through the SM-CCTV System is restricted to each specific facility and video from a specific off-site location may only be viewed after the video has been exported from the SM-CCTV System to portable electronic media. Authorized users of the SM-CCTV System will be able to access the system and/or view video in one of two ways: (1) through an SMS workstation located at ICE facilities or (2) by viewing live video displays at certain guard posts or offices at ICE facilities. A SMS workstation is a computer terminal on which SMS software has been installed to allow it to logon to the SM-CCTV system and view other SMS component systems. Cameras with pan/tilt/zoom capabilities may be controlled using a joystick and keyboard attached to SMS workstations. SMS workstations in the facility may be located in individual office areas or in a security command center staffed by OPR/SMU personnel and PSOs. A security command center allows OPR/SMU personnel and PSOs to monitor real-time and recorded video using multiple SMS workstations and display screens located in the center.

Cameras are placed in elevated locations on the perimeters of the ICE facilities to provide the greatest possible range and area of surveillance; this allows the personnel monitoring the video feed to have the greatest situational awareness and visibility into activities occurring outside the buildings. Cameras are placed within ICE facilities to monitor specific entry and exit points to areas of interest within the facility, such as the loading dock, the parking garage, and hallways in the building interiors, where unauthorized entry or exit may be attempted by persons seeking to do harm. Cameras used for this system contain low-light technology to support detection of unauthorized or suspicious activities at night. The cameras also use pan/tilt/zoom capability with manual tracking, which allows the individual conducting the surveillance to adjust the camera in real time to gain the best image of any suspicious or illegal activity of interest that is occurring. Manual tracking was chosen so that the security personnel may follow the activity of a single individual within viewing areas that contain a large number of people. Automatic tracking would fail in this scenario.

SM-CCTV System cameras are mounted in elevated areas on the outside of ICE facilities and are placed within ICE facilities to monitor specific entry and exit points to areas of interest within the facility. SM-CCTV System cameras are not placed in locations where there is a reasonable expectation of individual privacy, such as bathrooms and changing rooms. Cameras are placed to observe entrance into the facility. Cameras are placed to observe traffic in hallways and rooms that are considered sensitive to the operations of ICE. For example, cameras are placed to observe the SMS equipment room that houses the DVRs and the loading dock at PCN where deliveries may be made to ICE headquarters. Exterior cameras are located to observe the immediate area surrounding the ICE facility. This is done to observe any attempt to enter or harm the building and its occupants from outside the building. Cameras are used exclusively for the detection and deterrence of criminal or terrorist activity by PSOs and OPR/SMU personnel, whose subject matter training teaches them to avoid profiling of protected classes of individuals. Camera placement in these areas does not pose a heightened risk of misuse.