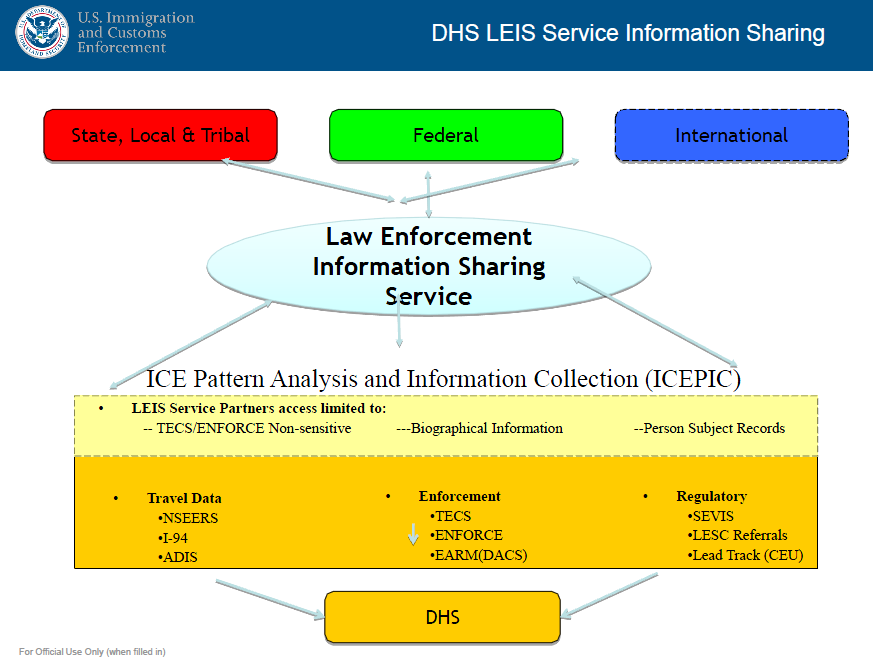 A slide from a 2011 presentation by Immigration and Customs Enforcement's Chief Information Officer depicting the flow of information through the ICEPIC system.

The ICE Pattern Analysis and Information Collection (ICEPIC) system was established in 2008 to enable ICE law enforcement agents and analysts to look for non-obvious relationship patterns among individuals and organizations that are indicative of violations of the customs and immigration laws that are enforced by DHS agencies, as well as possible terrorist threats and plots. From these relationships, ICE agents develop specific leads and intelligence for active and new investigations. Identified relationships are also recorded for reuse in subsequent investigative analyses. The information processed by ICEPIC comes from existing ICE investigative and apprehension records systems, as well as immigration and alien admission records systems. ICEPIC includes capabilities that assist investigators in recording results of analyses performed in support of investigations and in capturing additional relevant information obtained from outside sources. The information collected by, on behalf of, in support of, or in cooperation with DHS and its components may contain personally identifiable information collected by other Federal, State, local, tribal, foreign government agencies, or international organizations.

ICEPIC is a set of information analysis tools which allow disparate sources of information to be analyzed to find previously unknown relationship data about individuals who are the subject of ongoing and valid investigations. Relationship data is made up of information about how a place, person, or thing (e.g., automobile or other piece of property) relates to other persons, places, or things. For example, ICEPIC can determine relationship data about how certain events occurred at a certain address, or certain individuals under investigation who have shared the same address in the past. ICEPIC also includes capabilities that assist investigators in recording results of analyses performed in support of investigations. All ICEPIC searches are conducted with the appropriate predicate for a search, i.e., ongoing investigation into a violation of law.

Use of the ICEPIC System

According to the DHS Privacy Impact Assessment of the ICEPIC system, information is used to generate analytical reports to identify potential violations of customs or immigration law, confirm suspected violations, or investigate potential terrorist threats. The system automates five processes for investigators:

1. Analysis of leads, law enforcement and intelligence reports, and referrals, and processing of queries of ICE and DHS information to locate relevant records and produce reports.
2. Integration and resolution of information from multiple ICE and DHS databases to provide leads for law enforcement investigations and disruption of potential terrorist activities.
3. Initiation of analyses that support investigative cases in ICE headquarters and field offices and recording of the results of beneficial analyses.
4. Production and dissemination of target indicator profiles and other intelligence.
5. Management of analysis workflows and information resources.2

Reports generated through the use of information in ICEPIC are used by the Department of Justice (DOJ) or other federal agencies in the review, settlement, and prosecution of claims, complaints, and lawsuits involving matters over which ICE exercises jurisdiction or when conducting litigation or in proceedings before any court, adjudicative, or administrative body. This includes any litigation matters where ICE, DOJ, or an employee that is acting in his or her official capacity in support of ICE, the United States, or any agency thereof is involved. The Federal Bureau of Investigation (FBI) uses ICEPIC information when ICE becomes aware of information that may be related to an individual in terrorism-related activity. 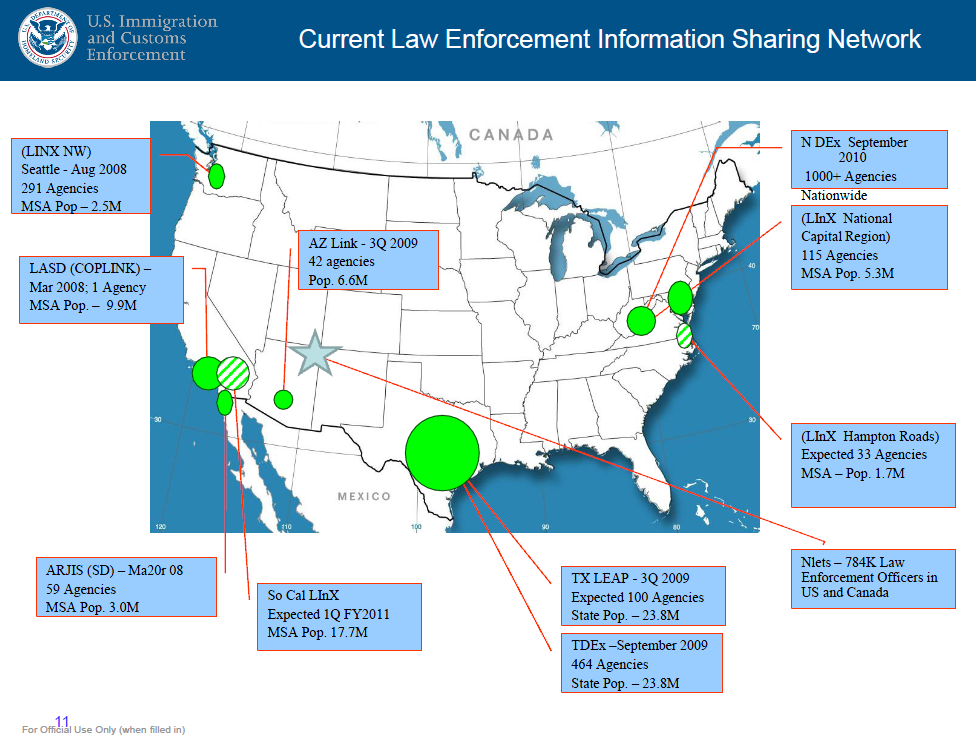 Information in the ICEPIC System

The ICEPIC system retains records for ten (10) years from ICE’s last use of the individual’s data, and then archives the information for an additional five (5) years. After the five (5) year period, information is destroyed unless it has become relevant to a legal action, at which point the retention schedule would reset.

Based on the need to know, ICE may share analytical reports generated from ICEPIC information with other parts of DHS including both law enforcement and intelligence agencies. These may include: the DHS Operations Center, U.S. Secret Service, the U.S. Coast Guard, U.S. Customs and Border Protection, Transportation Security Administration, and the Office of Intelligence and Analysis. Organizations will only receive the information which they are authorized to receive.3

ICE shares analytical reports (not raw data) generated from ICEPIC information with law enforcement or intelligence agencies that demonstrate a need to know the information in the performance of their missions, including Federal, State, tribal, local and foreign law enforcement agencies, as well as relevant international organizations such as INTERPOL. As mentioned above, DOJ and the FBI receive analytical reports regularly, but external sharing is not limited to those agencies. According to the DHS Privacy Impact Assessment, all sharing is in accord with the ICEPIC System of Records Notice and the Privacy Act.4

Information is transmitted via hand-delivered reports and via e-mail over DHS sensitive but unclassified (SBU) networks, the DHS Homeland Security Data Network (HSDN), and the Department of Defense’s Secret Internet Protocol Router Network (SIPRNET).  Reports are marked as “For Official Use Only/Law Enforcement Sensitive.” As a pre-condition to receiving such reports, ICE prohibits the recipient agency from further disseminating the information without prior approval from ICE.5  Contractors have access to all systems, including ICEPIC developers and information technology operations and maintenance staff. 6

Number of Records in ICEPIC 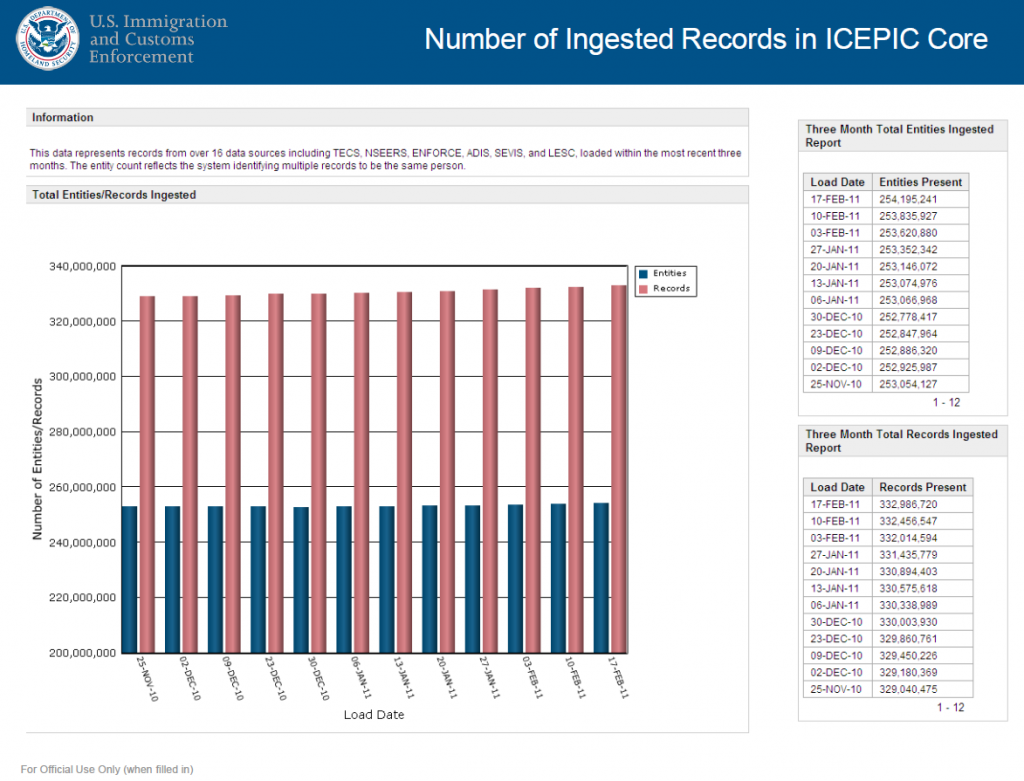 A slide showing the number of records that have been "ingested" into the ICEPIC Core.