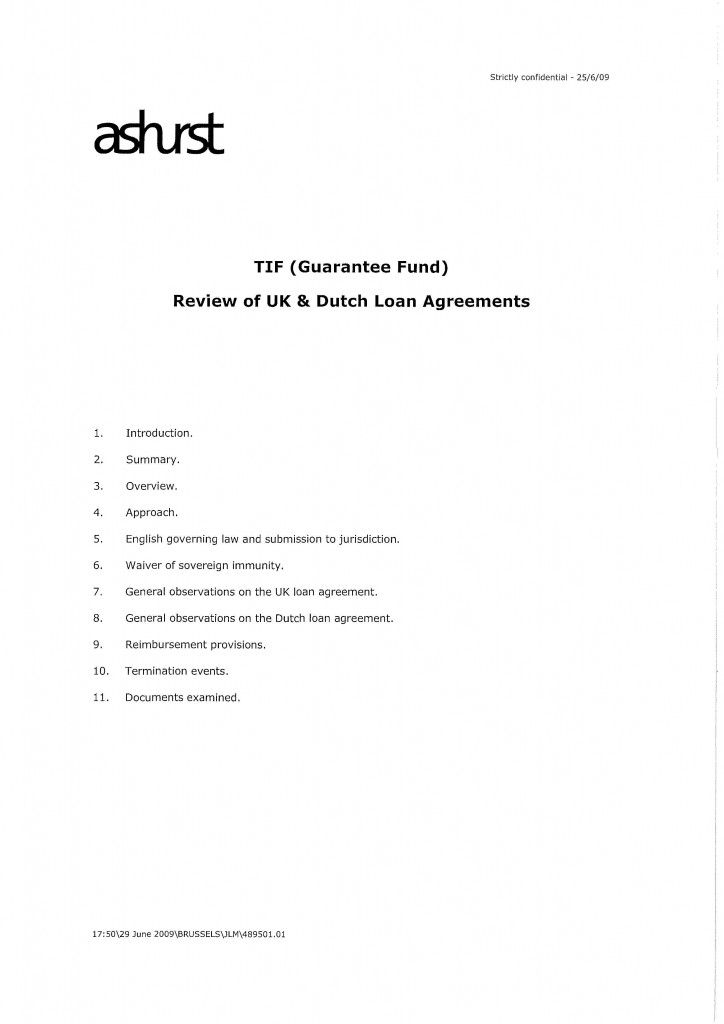 1.1 Schjødt represents the Ministry of Foreign Affairs of Iceland. Schjødt has asked us to review two loan agreements dated 5 June 2009 entered into by Iceland (as guarantor) and the Depositors’ and Investors’ Guarantee fund of Iceland as borrower (“TIF” or the “Guarantee Fund”). One loan agreement is with the UK and one with the Netherlands.

1.2 The Financial Services Compensation Scheme Limited (“FSCS”) in the UK and the Dutch Central Bank (“DNB”) have compensated depositors with Landsbanki in London and Amsterdam respectively in respect of deposit monies owing to them by Landsbanki which Landsbanki has been unable to repay. Those deposits were guaranteed by TIF up to €20,887 per depositor. The loans to be made available by The Commissioners of Her Majesty’s Treasury (“HMT”) under the UK loan and by the State of the Netherlands (the “Netherlands”) under the Dutch loan will be used by TIF to reimburse those compensation payments made by FSCS and DNB respectively.

1.3 Both the UK loan and the Dutch loan are governed by English law.

1.4 We have reviewed the loan agreements. We focussed in particular on the following areas:
• English governing law and submission to jurisdiction;
• Waiver of sovereign immunity;
• General observations (highlighting any unusual features);
• Reimbursement provisions relating to the loans;
• Termination Events relating to the loans.

1.5 We summarise our conclusions in section 2 (Summary). We include diagrams in section 3 giving an overview of each loan arrangement. Sections 4 to 10 then cover each of the areas mentioned in paragraph 1.4 above in greater detail. The summary should be read in conjunction with the more detailed analysis.

1.6 The background to the loan agreements relates to the obligation of EEA Member States to fulfil the requirements of Directive 94/19/EC as incorporated into the agreement on the European Economic Area, in the context of the failure of the Icelandic Banks. Directive 94/19/EC sets out the obligation to ensure that depositors are repaid up to at least 20,000 EUR (in the case of Iceland, 20,887 EUR) for each depositor when deposits become unavailable, regardless of whether their deposits are held in a bank in an EEA state or at a branch of such a bank in another EEA state.

2.2 Interest and repayment: Both loans bear interest at 5.55% per annum. The interest compounding annually until 5 June 2016 and from then on is payable in cash quarterly. The loans must be repaid by 32 quarterly instalments which start on 5 June 2016 and end on 5 March 2024. However, to the extent that recoveries are made from Landsbanki’s liquidation they must be applied against the UK and Dutch loans pro rata and so recoveries will reduce the amount of the quarterly repayment instalments which apply after 5 June 2016. If there are no such recoveries then all the scheduled repayments must
be met in full.

2.5 Sovereign immunity: Iceland waives its rights to sovereign immunity. As a result the UK and Dutch lenders will be entitled to obtain court judgments against Iceland if it fails to pay on its guarantee and also obtain court orders against its assets. The UK and Dutch lenders will not be entitled to obtain judgment against the assets of the Icelandic Central Bank (Sedlabanki) unless Sedlabanki independently waives its rights to immunity in respect of those assets. In addition, we have reviewed an email sent by Gary Roberts (Head of Financial Services Statutory at the UK Treasury) confirming (on behalf of both Dutch and UK governments) that the waiver of sovereign immunity recorded in the loan agreements is not intended to “extend to a waiver of the various forms of diplomatic immunity provided by the Vienna Convention of 1961. Also that [HM Treasury] will not seek to issue process or levy execution in circumstances where that would infringe upon the immunities granted to Iceland by the Vienna Convention.

2.6 Loan agreement terms: The terms of the loan agreements are fairly typical of those we would expect to see in an international loan agreement – although tailored for the rather unusual circumstances in which the loans are being made available to TIF. We summarise some points of particular interest in section 7. The main items relate to:
• the springing nature of the guarantee and the delay in operation of the guarantee;
• the requirement to treat creditors of Landsbanki in a way which accords with accepted international or European principles of treatment of creditors in an international winding Up;
• the requirement for Iceland or TIF to give the UK and Dutch lenders at least equivalent treatment to any other lender which finances claims of depositors of an Icelandic bank;
• the requirement to make further payments to depositors if payments above (20,887 are made to any Landsbanki depositor by way of compensation;4
• whilst the Netherlands waive any further claims against Iceland and TIF in respect of the making of compensation payments relating to Landsbanki, DNB (which actually made the compensation payments) does not. However, we understand that the DNB will provide such a waiver in a separate assignment agreement the signature of which is a condition precedent to the Dutch loan agreement coming into force.

2.7 Reimbursement provisions: The loans are repayable in instalments as summarised in section 2.2.

2.8 Termination Events: Whilst most of the Termination Events are fairly typical for an international loan there are a few which warrant closer attention (see section 10). The loan is potentially immediately repayable if any of these events occur and they include:
• any payment by TIF or Iceland under the loan agreementsS being set aside invalidated or reduced;
• TIF or Iceland failing to comply with the requirements of Directive 94/19/EC in respect of any Landsbanki depositor in any way;
• TIF being unable to pay its debts as they fall due;
• if TIF is dissolved or ceases to be the sole deposit guarantee scheme in respect of Landsbanki depositors officially recognised in Iceland. 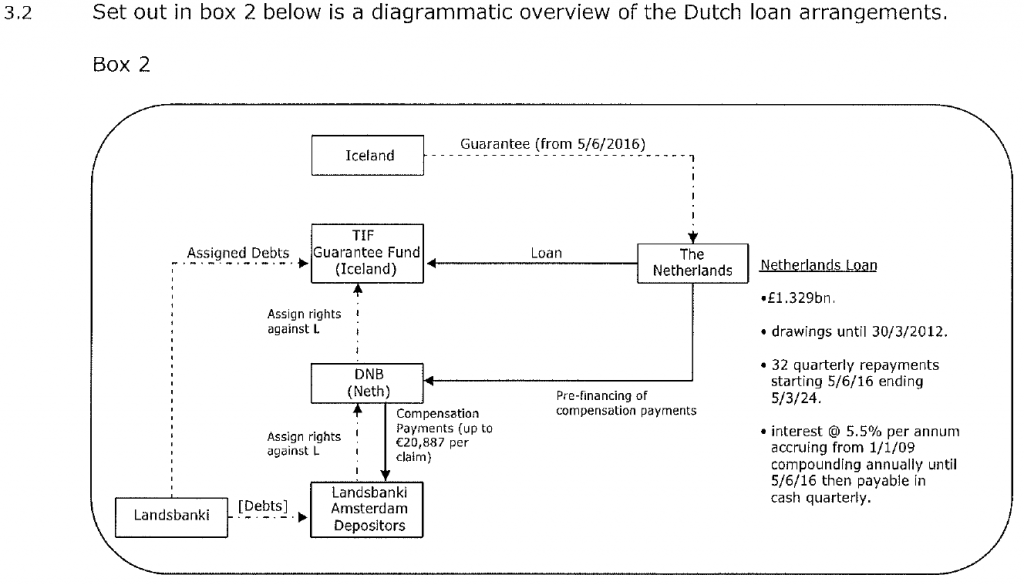 5.1 The UK and the Dutch loan agreements both record (a) that they are governed by English law and (b) that the parties submit to the jurisdiction of the English courts for the purpose of resolving any claim or dispute arising out of the loan agreements.6 Each lender nonetheless reserves the right to take legal proceedings relating to any dispute in any other courts which have jurisdiction.

The Parties agree that the courts of England are the most appropriate and convenient courts to settle Disputes and accordingly no Party will argue to the contrary. This paragraph ….. is for the benefit of the Lender only. As a result, the Lender shall not be prevented from taking proceedings relating to a Dispute in any other courts with jurisdiction. To the extent allowed by law, the Lender may take concurrent proceedings in any number of jurisdictions.”

6.1 The general rule under English law is that a State (such as Iceland) is not subject to the jurisdiction of the English courts12 and no proceedings to enforce any judgment may be brought against the assets of the relevant State.

6.2 This immunity extends to include:
• the sovereign or other head of State in his or her public capacity;
• the government of the State;
• any department of that government; and
• any separate legal entity connected with the State but only if the proceedings relate to an act done by the legal entity in the exercise of sovereign authority and the State itself would be immune.

6.3 A State (or legal entity enjoying State immunity) can, however, contractually agree to waive the above immunity it would otherwise have.

6.4 Each loan agreement includes a contractual waiver of immunity in the following terms (emphasis added by us):

“Each of the Guarantee Fund and Iceland consents generally to the issue of any process in connection with any Dispute and to the giving of anv tvpe of relief or remedy against it, including the making, enforcement or execution against any of its property or assets (regardless of its or their use or intended use) of any order or judgment. If either the Guarantee Fund or Iceland or any of their respective property or assets is or are entitled in any jurisdiction to any immunity from service of process or of other documents relating to any Dispute, or to any immunity from jurisdiction, suit, judgment, execution, attachment (whether before judgment, in aid of execution or otherwise) or other legal process, this is irrevocably waived to the fullest extent permitted by the law of that jurisdiction. Each of the Guarantee Fund and Iceland also irrevocably agree not to claim any such immunity for themselves or their respective property or assets.”

6.6 We understand that Sedlabanki is constituted as a separate legal entity. The UK’s State Immunity Act has a special regime for a State’s central bank and specifically provides that the assets of such a central bank” shall not be subject to any process for the enforcement of a judgment ….. or an action in rem for its arrest, detention or sale”. As such property and assets of Sedlabanki will benefit from state immunity from enforcement proceedings, detention or sale unless Sedlabanki itself agrees to waive its rights to State immunity.