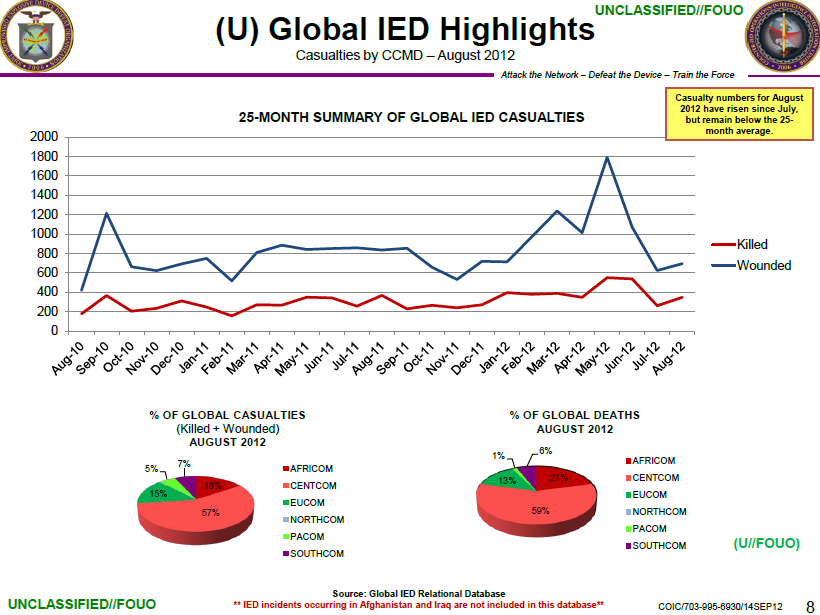 Casualties resulting from the use of improvised explosive devices (IEDs) are rising in 2012 according to statistics from the Department of Defense’s Joint Improvised Explosive Device Defeat Organization (JIEDDO).  Over a 25-month period from August 2010 through August 2012, JIEDDO found that global IED casualties reached their peak in May 2012 with approximately 1800 people wounded and nearly 600 killed in that month alone.

The IED statistics are part of a Global IED Monthly Summary Report for August 2012 issued by JIEDDO’s Counter-IED Operations/Intelligence Center.  The report, which does not include incidents occurring in Afghanistan and Iraq, focuses on providing detailed information on the components, targets and groups using IEDs around the world as well as analysis of specific incidents over the reporting period.  The statistics are presented both in aggregate and by combatant command, highlighting enduring threats surrounding the use of IEDs by terrorists, extremists and other criminal organizations.

In Africa, the use of IEDs by Al-Shabaab and Al-Qaeda in the Islamic Maghreb has led to IED detonations and casualties increasing in 2012.  The existence of safe havens in Mali and the proliferation of “advanced military grade munitions widely available in Libya” present threats not just to African countries, but to the Middle East and surrounding regions.  IED employment throughout U.S. Central Command (CENTCOM) has increased casualties significantly in 2012, wounding more than 1200 and killing over 300 people in May.  The increasing use of IEDs by Syrian opposition members, including the Free Syrian Amy, has contributed to these increased casualties, yet the majority of IED incidents are perpetrated by Al-Qaeda affiliated groups in Pakistan and Yemen.

Though IED usage in the area of responsibility for both U.S. Northern Command (NORTHCOM) and Pacific Command (PACCOM) remains below 25-month averages, casualties over the same period peaked between March and May 2012 in both commands.  IED casualties in South America peaked in February 2012 with more than 200 wounded and approximately 30 people killed.  Several groups in Colombia, including the Revolutionary Armed Forces of Colombia (FARC) and National Liberation Army (ELN), have contributed to the continued use of IEDs in the region.  Due to the broad definitions JIEDDO uses to identify IEDs, statistics for South America also include the use of “fire bombs” during Chilean student protests and other less traditional examples of improvised explosive or incendiary devices.