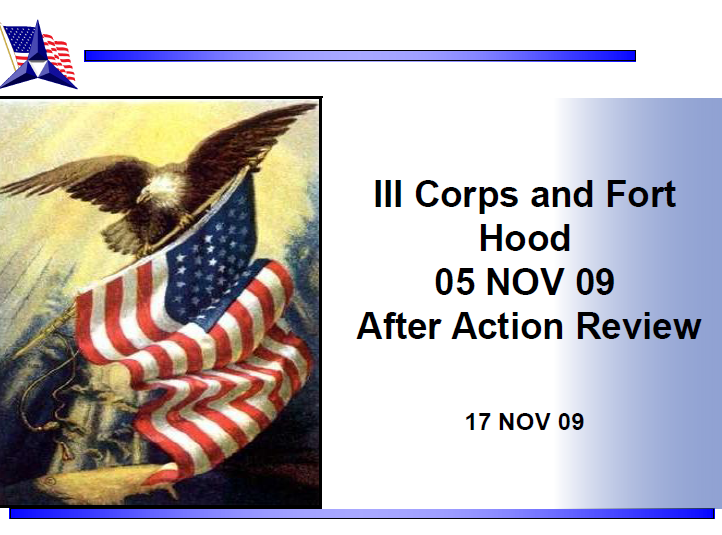 Fort Hood conducts an installation-wide after action review (AAR) to prepare a lessons learned document in response to the 5 Nov 09 incident.

•Issue: Active shoot scenario (sustain)
•Discussion: In the aftermath of mass shootings like Columbine and other more recent incidents, US Army CID published a document outlining alternative solutions to dealing with an active shooter. FT Hood DES began training this new solution last year which involved law enforcement immediately and aggressively taking the fight to the shooter versus creating a cordon and awaiting SWAT type forces. This training was cited by SGT Munleyas the driver behind her and Senior SGT Todd’s action that day. This action undoubtedly saved countless lives.
•Recommendation: Continue this training and mandate Army wide.

•Issue: doctrine calls for Triage at scene and secondary triage at hospital
•Discussion: when EMS were permitted on scene, Soldiers and SRP staff with medical training had already conducted emergency measures on injured Soldiers. They brought patients to the arriving ambulances and it became more of a scoop and run procedure than a choreographed plan with transport of the most critically injured first, consciously spreading them out between area hospitals.
•Recommendation: without sacrificing speed for doctrine, a short delay to assess the severity of wounds and allow EMS to prioritize transport might have reduced chaos and patient tracking later

•Issue: Achieving COP early in the MASCAL
•Discussion: Info sharing and establishing COP is best conducted at Ops Center. Ops Center has multiple means to communicate with all parties involved (VTC, conference phone, radios, etc.). CMD GRP also received updates in offices but achieving COP at both Ops Center and CMD GRP was a challenge. Information flow is wherever the CG needs it to be, but responsive to the immediate decisions required –Phantom Seal, lockdown, CRB activation
•Recommendation: Once Ops Center is established, info needs to be shared between all. Need a deliberate battle handover to enable the EOC to pick up all reporting and routinely update the CMD GRP