The following IMF report was obtained from the website of the largest newspaper in Cyprus Ὁ Φιλελεύθερος (Phileleftheros). 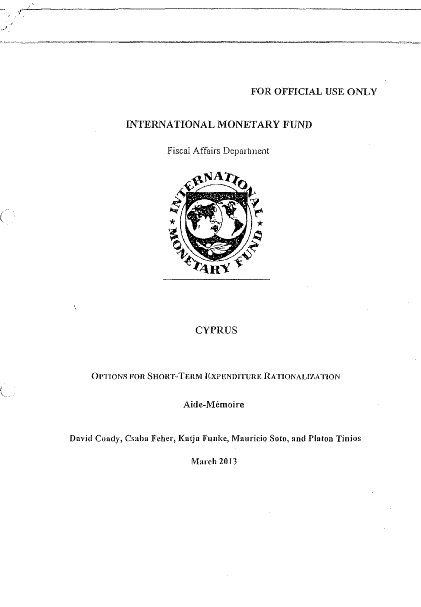 Increasing public spending had contributed to a substantial deterioration of public finances in Cyprus over recent years. To address fiscal imbalances, the government introduced an initial set of fiscal reform’s in late 2012. However, additional measures are needed to ensure the sustainability of public finances. The size of the necessary adjustment will depend, among other things, on the magnitude of spillovers from financial sector restructuring.

This report provides options for further rationalizing public spending, both in support of ongoing fiscal consolidation efforts and to enhance the efficiency and equity of public spending. The report focuses on rationalization of the public sector wage bill, education and health spending and social protection spending (including pension and non-pension social benefits). A menu of possible expenditure measures is identified and their short-term fiscal impact quantified.

Expenditure rationalization should give priority to reducing the public sector wage bill, especially in education. While total public spending as a percent of GOP is similar to the average for EU countries, spending on wages and on education arc among the highest in the EU. Also, while public pension spending is low by EU standards, the existing system is extremely favorable to public sector workers, and any further spending cuts should address this inequity in a progressive manner.

Public Sector Wage Bill. The relatively large size of the wage bill is mainly the result of high average compensation–even after the recent wage bill measures, a premium of about 30 percent in government pay remains relative to the EU average. Government employment is also similar to the EU average, although pockets of excess employment seem to exist in certain areas such as education. The wage bill could be reduced through flat rate pay reductions, including the elimination of the 13th wage. More targeted reductions could aim to reduce the premium for seniority instead of focusing on gross salary levels. In the medium term, the wage grid could be revised to better link compensation and performance. In terms of employment, targeted reductions focused on casual employees, particularly in education, could deliver some savings. In addition, mandatory unpaid leave could be required to some workers in low priority areas.

Education. In spite of high spending, the quality of primary and secondary education is compromised by several practices related to the hiring, evaluation and promotion processes for teachers. Measures to improve the quality of public education include increasing teaching hours (particularly for senior teachers), extending school schedules, and further consolidating with in and across schools aiming to reduce class size. Wages could be adjusted in the short term following adjustments to the overall wage grid. Public spending on tertiary education is especially high, reflecting high salaries and allowances and the creation of two new public universities over the past decade. Expenditure allocations to tertiary education could be reduced through the introduction of tuition fees and the elimination of the “incentive” allowance for professors. In the medium term, compensation for public sector teachers could be brought more in line with private sector remuneration and the hiring of teachers could be based on merit rather than on waiting lists. The administrative structure, including school boards, should also be reviewed.

Public Pensions. Recent parametric reforms address the long-term rise in spending. In GSIS, little room remains for further savings. However, substantial savings could be achieved by further adjusting benefits for government employees (including pensions in payment), which are much larger than what would be justified on the basis of their contributions. A significant reduction of the lump-sum gratuity could also be considered, either through outright termination or a reduction coupled with mandatory annuitization. Relatively large savings could be achieved by progressive reductions to GEPS and state officials’ benefits in service. These spending reforms can be supplemented by reforms in other areas focused on containing, or even reducing, spending and enhancing its efficiency and equity. This could be achieved as follows:

Public Health Spending. Public and also total spending on health care is relatively low. However, the absence of a universal public health care system, and the limited public sector capacity to serve those patients that are eligible for free public health care, results in long waiting times in the public sector and large out-of-pocket spending for private health care. This raises affordability and equity concerns. The healthcare system is also fragmented with health services delivered by public and private providers in a largely uncoordinated manner. This causes inefficiencies in terms of the cost and quality of health care provision. The introduction of the General Health Insurance System would address many of these problems but will take time and should only go ahead if correct costing and functional financing arrangements to safeguard the system’s fiscal sustainability are in place. [n the meantime, pressure on the public healthcare system can be reduced by tightening eligibility criteria for subsidized public health care and increasing the number of patients that pay for public services. The collected revenues could be used to buy additional services from the private sector to address identified bottlenecks in public service delivery.

Other Social Protection Spending. Although spending is low by EU standards, the current system is fragmented and benefits are not sufficiently targeted to those most in need. The system also needs to be reformed to better address the social challenges resulting from the economic down tum, in particular the rise in unemployment. Expenditure savings generated through better targeting and the scaling back or elimination of some social benefits can help to finance an expansion of active labor market programs with a focus on incentivizing the unemployed to reenter the labor market. Specific attention needs to be given to addressing the sharp rise in youth unemployment, including through enhanced public employment services and training. Consideration could also be given to introducing a flat-rate means-tested unemployment assistance benefit for those not eligible for unemployment insurance. To improve the overall cost-effectiveness of these social benefits, existing plans to streamline administrative structures and consolidate benefits should be expedited.

The menu of expenditure reforms identified in the report can make a significant contribution to short-term fiscal consolidation efforts and improve the efficiency and equity of public spending. However, the actual package of measures adopted and their timeline will reflect a range of factors, including: (i) the extent of short-term expenditure consolidation required; (ii) the possibilities for generating fiscal space in other areas, including on the revenue side and by decreasing other public spending not covered by this report (e.g., spending on goods and services and capital spending); and (iii) the administrative, political, and social constraints facing the government. Table I provides a summary of identified measures, including a quantification of their likely fiscal impact. 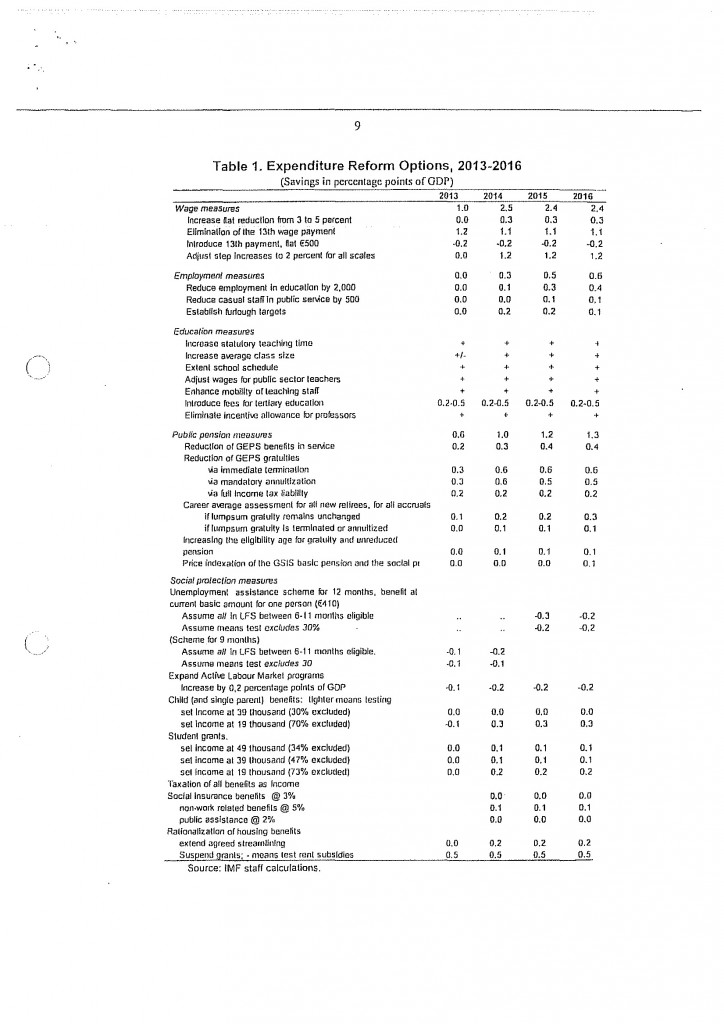