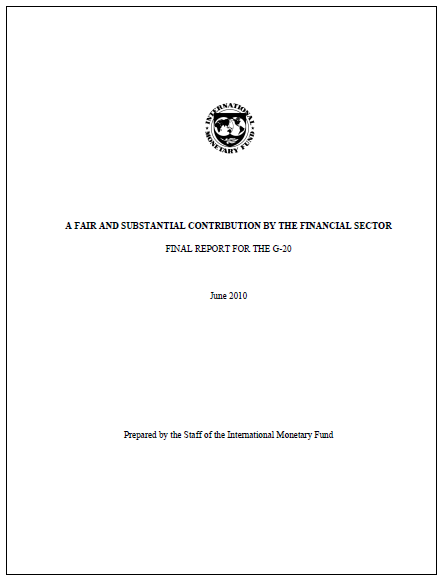 FINAL REPORT FOR THE G-20

This report responds to the request of the G-20 leaders for the IMF to: “…prepare a report for our next meeting [June 2010] with regard to the range of options countries have adopted or are considering as to how the financial sector could make a fair and substantial contribution toward paying for any burden associated with government interventions to repair the banking system.”

While the net fiscal cost of government interventions in support of the financial system
may ultimately prove relatively modest, this greatly understates the fiscal exposures
during the crisis. Net of amounts recovered so far, the fiscal cost of direct support has
averaged 2.8 percent of GDP for advanced G-20 countries. In those most affected, however,
unrecovered costs are on the order of 4–6 percent of GDP. Amounts pledged, including
guarantees and other contingent liabilities, averaged 25 percent of GDP during the crisis.
Furthermore, largely reflecting the effect of the crisis, government debt in advanced G-20
countries is projected to rise by almost 40 percentage points of GDP during 2008–2015.

Many proposals have been put forward to recover the cost of direct fiscal support, and
some have been implemented. Proposals for the government to recover these costs include
levies related to selected financial sector claims and taxes on bonuses and specific financial
transactions. The least distortionary way to recover the fiscal costs of direct support would be
by a ‘backward-looking’ charge, such as one based on past balance sheet variables. This
would define a fixed monetary amount that each institution would owe, to be paid over some
specified period and subject to rules limiting the impact on net earnings.

The focus of countries’ attention is now shifting to measures to reduce and address the
fiscal costs of future financial failures, through both regulatory changes and, perhaps,
levies and taxes on financial institutions. Measures related to levies and taxes should:
ensure that the financial sector meets the direct fiscal cost of any future support; make
failures less likely and less damaging, most importantly by facilitating an effective resolution
scheme; be reasonably easy to implement, including in the degree of international
coordination required; enable, to the extent desired, an additional fiscal contribution from the
financial sector to recognize that the costs to countries of crises exceed the fiscal cost of
direct support; and address existing tax distortions at odds with financial stability concerns.

A package of measures may be needed to attain these objectives.

Measures that impose new costs on financial institutions will need to reflect and be
coordinated with regulatory changes under consideration. This is critical for ensuring
policy coherence, enabling market participants to plan accordingly, and avoiding adverse
effects on economic growth from placing an excessive burden on the financial sector.