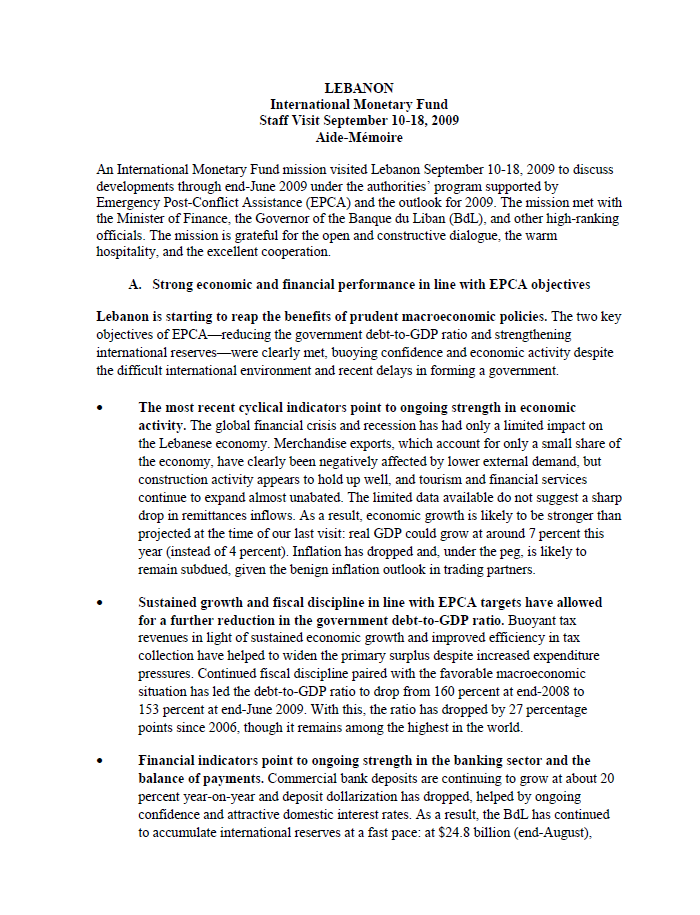 An International Monetary Fund mission visited Lebanon September 10-18, 2009 to discuss developments through end-June 2009 under the authorities’ program supported by Emergency Post-Conflict Assistance (EPCA) and the outlook for 2009. The mission met with the Minister of Finance, the Governor of the Banque du Liban (BdL), and other high-ranking officials. The mission is grateful for the open and constructive dialogue, the warm hospitality, and the excellent cooperation.

A. Strong economic and financial performance in line with EPCA objectives

Lebanon is starting to reap the benefits of prudent macroeconomic policies. The two key objectives of EPCA—reducing the government debt-to-GDP ratio and strengthening international reserves—were clearly met, buoying confidence and economic activity despite the difficult international environment and recent delays in forming a government.

The most recent cyclical indicators point to ongoing strength in economic activity. The global financial crisis and recession has had only a limited impact on the Lebanese economy. Merchandise exports, which account for only a small share of the economy, have clearly been negatively affected by lower external demand, but construction activity appears to hold up well, and tourism and financial services continue to expand almost unabated. The limited data available do not suggest a sharp drop in remittances inflows. As a result, economic growth is likely to be stronger than projected at the time of our last visit: real GDP could grow at around 7 percent this year (instead of 4 percent). Inflation has dropped and, under the peg, is likely to remain subdued, given the benign inflation outlook in trading partners.

Sustained growth and fiscal discipline in line with EPCA targets have allowed for a further reduction in the government debt-to-GDP ratio. Buoyant tax revenues in light of sustained economic growth and improved efficiency in tax collection have helped to widen the primary surplus despite increased expenditure pressures. Continued fiscal discipline paired with the favorable macroeconomic situation has led the debt-to-GDP ratio to drop from 160 percent at end-2008 to 153 percent at end-June 2009. With this, the ratio has dropped by 27 percentage points since 2006, though it remains among the highest in the world.

Financial indicators point to ongoing strength in the banking sector and the balance of payments. Commercial bank deposits are continuing to grow at about 20 percent year-on-year and deposit dollarization has dropped, helped by ongoing confidence and attractive domestic interest rates. As a result, the BdL has continued to accumulate international reserves at a fast pace: at $24.8 billion (end-August), reserves have doubled over the last 18 months. In part thanks to prudent banking sector supervision, banks have virtually not been affected by the global financial crisis and have remained profitable and well-capitalized. Eurobond and Credit Default Swap spreads have moderated, and now move around the emerging markets average.

B. End-June performance under EPCA

Performance through end-June under the EPCA-supported program has remained broadly favorable, despite a few slippages.

Despite these favorable outcomes, government net borrowing from the BdL was substantially higher than the program ceiling, although the BdL’s monetary interventions more than offset the impact on reserve money. The net borrowing target was missed by 44 percent (LL 2.6 trillion) reflecting a drawdown of government deposits at the BdL and further T-bill purchases by the BdL. This overrun was in part a result of the commercial banks’ preference to purchase high-yielding 5-year Certificates of Deposit (CDs) offered on tap by the BdL rather than lower-yielding 3-year T-bills. Conducting monetary operations through CDs helped attract inflows, build reserves and support confidence during the global crisis, but crowded out the demand for lower-yielding T-bills and increasingly weighed on the BdL’s finances. In July, the BdL discontinued all issuance of CDs, and government net borrowing declined somewhat, also in light of a sizeable reduction in the BdL’s holdings of Lebanese government Eurobonds.

There has been limited progress on the program’s monitorable actions. The BdL has adopted formal policies for the selection, appointment, and rotation of the BdL’s external auditors (end-June monitorable action). However, the introduction of a Treasury Single Account (end-June monitorable action) was postponed because parliament did not pass the corresponding legislation. There has also been little progress on the revision of energy tariffs and the Global Income Tax law (end-December 2008 and end-March 2009 monitorable actions, respectively) because of the difficult political environment in the run-up to the election. Moreover, privatization of the mobile telephone companies (end-March monitorable action on the issuance of a request for applications), which had been postponed due to market conditions, would require a renewed political decision by the incoming government.

Strong economic growth offers an opportunity to move decisively towards fiscal consolidation. Despite the recent successes in reducing the government debt-to-GDP ratio, the still very high debt remains a key vulnerability that needs to be addressed through higher primary surpluses. In the near-term, buoyant fiscal revenues provide a window of opportunity to move in this direction. In this environment, strict expenditure discipline would ensure that the strong revenues can be used to reduce the large fiscal deficit. On unchanged policies, a primary surplus (excluding grants) of 0.9 percent of GDP this year appears achievable (up from 0.6 percent in 2008), implying an overall fiscal deficit of 10.6 percent of GDP. With this, the debt-to-GDP ratio could decline to 151 percent by the end of the year.

With continued fiscal discipline, the government will likely be able to obtain the necessary financing from the market during the remainder of 2009. In light of continued strong commercial bank deposit inflows and the gradual unclogging of international capital markets, financing conditions are broadly favorable. Sufficient market financing will hence likely be available for the government during the remainder of 2009. The discontinuation of BdL CD issuance will also be beneficial in this respect. The government should continue to closely coordinate its foreign exchange financing policy with the BdL. Following the formation of a new government, swift authorization by parliament for additional issuance would substantially help in this respect.

Decisive action by the incoming government will be necessary to reach the substantial primary surpluses required to move the fiscal position towards sustainability over the medium term. The incoming government should strive to quickly restore the fiscal consolidation agenda set out under Paris III. Top priorities include a reduction in the need for budgetary transfers to EdL and an increase in the VAT rate. In addition, the authorities should work towards a substantial reform of the energy sector to spur growth, and reconsider the privatization of the two mobile phone providers in light of evolving market conditions.
Interest rates should gradually decline further in line with market conditions. Prior to the welcome discontinuation of CD issuance (mainly 5-year maturities), the BdL had reduced 5-year interest rates to 9 percent, a decline of 100 basis points over a 2½ month period. At an 8.4 percent yield, the newly issued 5-year T-bills trade even lower. Deposit inflows have so far not reacted to lower policy rates, perhaps in part due to lags, and it may be too early to evaluate the full impact. Further declines should therefore be implemented at a gradual pace, to allow adequate time for a fuller evaluation of the effects of earlier reductions. Making use of parts of the BdL’s large T-bill portfolio to absorb excess local currency liquidity would help prevent an overly quick decline in yields and allow the BdL to reverse the second quarter increase in net lending to government. Although these steps will likely help to reduce the cost of sterilization, over the medium term, a strategy to strengthen the BdL’s balance sheet would be welcome.

The increased confidence in the Lebanese pound has also helped to reduce dollarization. The share of U.S. dollar deposits in total bank deposits has declined to 66 percent in July 2009, down more than 10 percentage points since early 2008. However, dollarization of bank credit to the private sector has declined only marginally and still stands at 83 percent. Lower interest rates in Lebanese pound would increase the attractiveness of local currency loans and over time also reduce the need for subsidized local currency lending as a means to encourage loan dedollarization.

The authorities’ interest in continued close engagement with the Fund following the expiration of EPCA is highly welcomed. Possible modalities can be explored once a new government is in place.

The authorities have expressed interest in an updated financial sector assessment under the Fund’s Financial Sector Assessment Program (FSAP). Staff could aim to arrange for a mission before end-April 2010, soon after the installment of a new Board of the Banking Control Commission (BCC), or else in late 2010 or beyond depending on the availability of Fund and World Bank staff resources.

Staff recommends Lebanon to consent to the amendments of the Fund Articles of Agreement for the creation of an investment authority and for the “quota and voice” reform. Both proposed amendments were approved by the Fund’s Board of Governors in early 2008 and await acceptance by at least 60 percent of Fund member countries before becoming effective. The amendments constitute modifications of an international agreement, and hence measures might be required under Lebanese law to enable Lebanon to consent.

Despite recent progress, the statistical system remains an important area for improvement. Real sector statistics should be compiled on a timely basis by the Central Administration for Statistics (CAS). The development of comprehensive statistics in the areas of real estate and labor markets would constitute a key improvement. Increased resources for the compilation of the balance of payments statistics would also be welcomed. 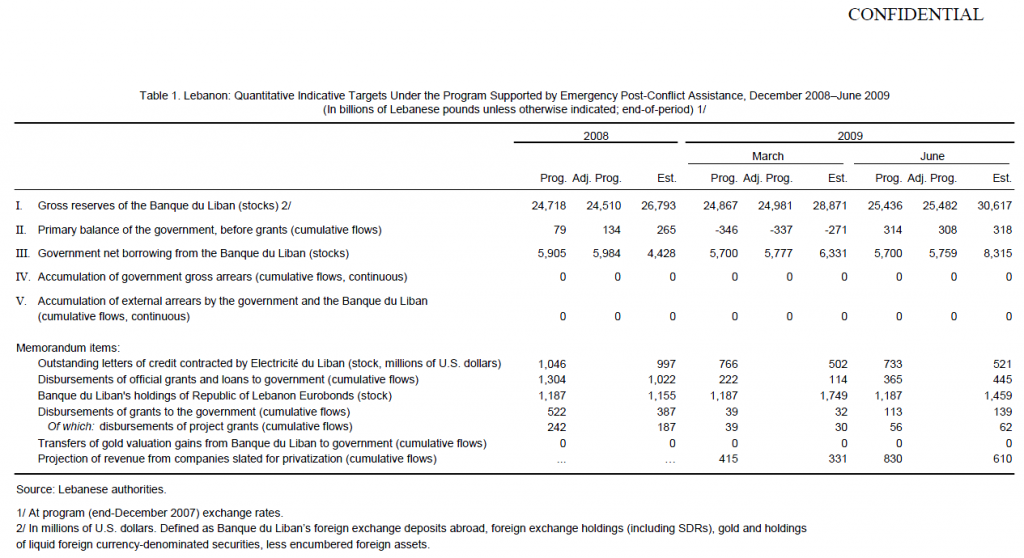 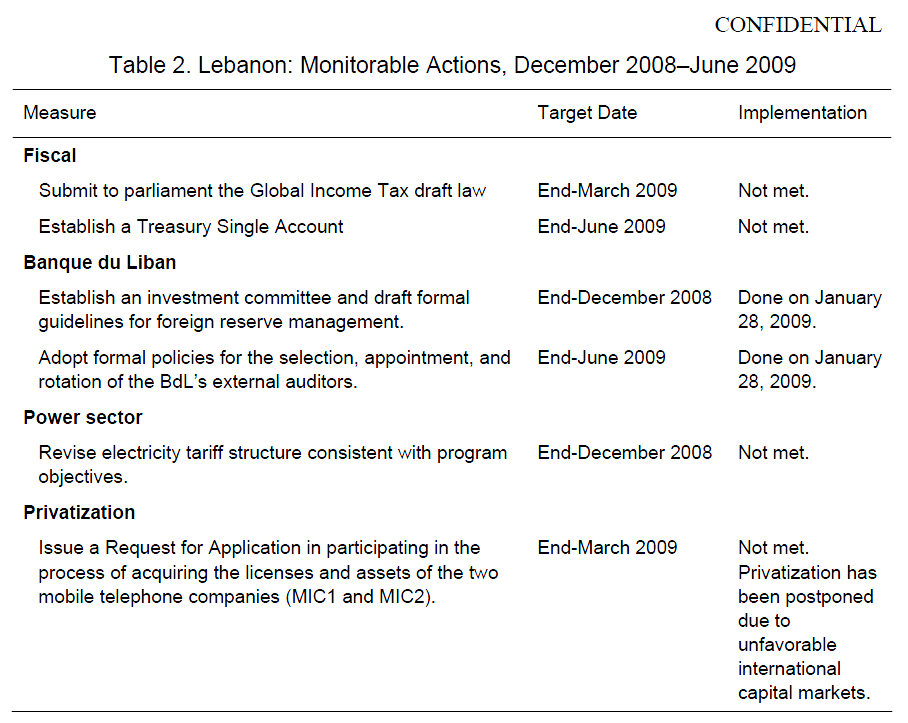