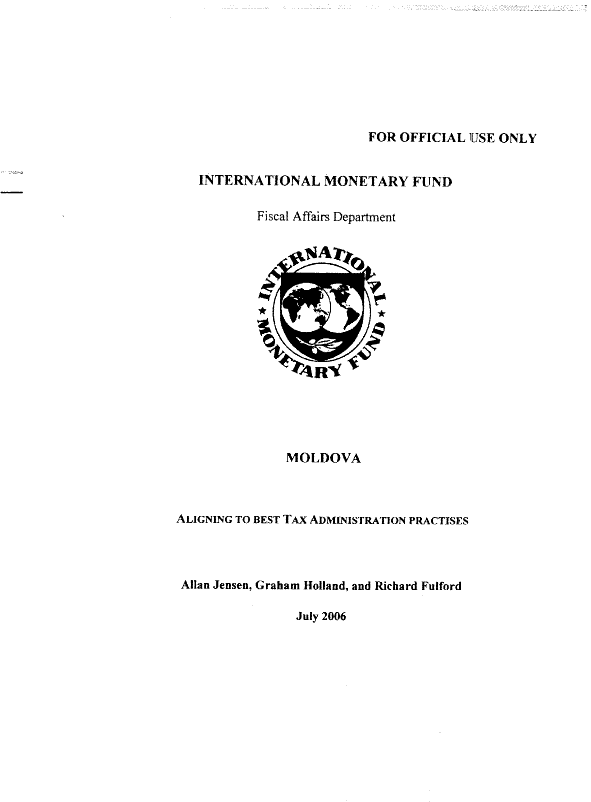 Using the occasion of the Spring Meetings-on April 22, 2006-Moldovan Finance Minister Michai Pop requested FAD’s assistance to review the authorities draft strategic plan for a comprehensive modernization of the State Tax Inspectorate (STI). The mission has been informed that the government intends to finalize and adopt the modernization plan by the end of September 2006.

FAD has provided technical assistance to Moldova on tax administration reform fbr more
than a decade, contributing to the authorities’ successes to implementing aspects of modem
tax administration. However, in May 2004 an FAD mission in revenue administration found
that reform efforts had lost momentum and that the recommendations of the 2000 FAD
mission’ had been only marginally implemented. The 2004 FAD mission made specific and
detailed recommendations for restarting the reforms in a number of key areas. Many of these
recommendations have since been implemented fully or partially (see appendix I) The STI,
however, has chosen to not implement some of the key recommendations, in particular those
related to organization issues, in part due to political constraints – and most recently due to
the ongoing work on establishing a comprehensive modernization strategy.
It is evident that Moldova’s European aspirations have further enhanced the impetus for
reforms. The European Union-Moldova Action Plan, signed in February 2005, provides a
platform-consistent with the authorities’ Economic Growth and Poverty Reduction Strategy
Paper-for advancing a broad agenda of measures (including in tax administration) designed
to improve Moldova’s long-run growth prospects.

The preparation and adoption of an acceptable tax administration reform strategy is a
requirement under the European Union-Moldova action plan that may be the basis for largescale
European Union (EU) aid to Moldova in the coming years, and is a structural
performance criterion (SPC) under a new Fund program that was approved by the Board in
May 2006.

The aim of the tax administration reform is to reduce the administrative burden of the tax
system and strengthen revenue collection. The Fund Program specifically requires a reform
outcome that includes a risk-based approach to audit and enforcement, improvement to the
VAT refund process, and the use of indirect audit methods of assessing tax liability as a
means of combating under-invoicing in external trade. The authorities have since nearly
completed the drafting of a tax administration reform strategy – which has been a subject for
review by this mission. In line with an agreement between the mission, the deputy prime
minister, and the finance minister in a meeting on July 12, 2006 that was also attended by the
IMF’s European Department, the mission has:

The mission recognizes that the authorities have made considerable efforts to develop a
comprehensive modernization strategy that contains many good elements. Nonetheless, the
strategy paper leaves much open for interpretation. The objectives are very broad and, thus,
are not measurable. In addition, it appears that the planned reform measures may not
sufficiently match the objectives they are intended to deliver.

Obviously, the strategy has not been developed in the way large institutions would normally
go about developing strategies that have major and long-term impact. Some key building
blocks in the strategy building process have been left out (see chapter III). However, strategic
planning is an ongoing exercise performed each year and the STI is encouraged to
incorporate all phases of the planning process in a top-down manner when preparing the
2007 version of the plan. Meanwhile the current 2006 – 2010 strategic plan represents a good
start and the mission believes that with some further work it may serve as a true guide for tax
administration reform in Moldova.

In the course of the mission’s review activities, it identified a number of deficiencies in the
organization and operations of the STI, which are discussed in chapters I-VII of this report.
STI management is aware of many of these shortcomings and may have intended the broad
objectives of the strategic plan to include these issues. In finalizing the current strategic plan,
the broad objectives it contains need to be replaced by clear, measurable objectives describing these and other issues the STI wish to address through the reform. Key
recommendations of this report are:

Finalize the current strategic planning using a top-down process to identify, through
this report and other analysis available to the STI, the major gaps in achieving a
modern tax administration, formulate five or six long-term strategic goals to bridge
these gaps, describe measurable objectives to achieve the goals, and, to the extent
possible in the time available, identify specific actions and timeframes. Develop an
estimate of project costs for 2007, and seek funding for these costs as part of the
upcoming budget process.

Establish a modernization task force (MTF), headed by a talented seasoned project
manager, with expertise from all key disciplines, and dedicated exclusively to the
development and implementation of the reforms. The MTF is likely to evolve into the
much needed developmental unit in STI headquarters, therefore, action now to beef
up the resources at headquarters (particularly in IT and audit) would be advisable, to
fill in the operational jobs of those assigned to the MTF.

Establish a steering committee headed by the STI director and including senior
members of the STI and Ministry of Finance (MOF), to monitor progress in the
reforms, effect decisions as required and resolve major obstacles encountered by the
MTF. An advisory committee representing major stakeholders such as the accounting
community, trade and business associations, and the Ministry of Economy and Trade,
that meets three or four times a year may provide good public relations and a test-bed
for new forms and information pieces.

Secure funding of the reform and outside expertise to help with the implementation
by identifying costs, and describing how these initiatives will contribute to broader
government goals (growth in businesses, foreign investment, revenues). The existence
of clearly described objectives and goals will facilitate consideration by the donor
community and assist in coordinating assistance in the areas required.

Strengthen the STI by implementing a headquarters organized according to functions
with distinct units devoted to program development, operations and key support
activities.
= Recognize that large taxpayers are distinctly different from, not just larger than,
smaller businesses and ensure that information programs, service delivery, risk
criteria, audit procedures and staff training in the Large Trader Unit (LTU) are
designed to suit the needs and characteristics of large taxpayers.

Expand the information sources for risk analysis systems and use these systems to
establish priorities in debt collection, and to select high-risk cases for audit and refund
verification.

Introduce throughout the STI a system to cover caseload control in enforced
collections, audit and refund units to allocate cases, track progress, record action or
phases performed and record results in a standard format suitable for feedback into
risk analysis systems (self-evaluation of risk criteria) and management information
needs.

Establish a performance measurement system covering all operational areas with
standards designed to encourage the quality, service and effectiveness levels targeted
by management. Performance standards in audit and refund verification, for example,
should be designed to encourage auditors to focus on material issues and to move on
when these are resolved rather than continuing to crosscheck documents in relatively
non-productive cases.

Ensure that business processes are redesigned in a manner that will utilize common
systems to support multiple tax lines wherever feasible, not inhibit management in
changing where activities are carried out, permit access to data on all taxes through a
single system and capture all data to manage workload and report results as part of
the process and IT system that supports it.

Once the strategic plan has been adjusted, it should guide the STI’s modernization efforts.
Continuing political and management support and adequate funding will be critical. ..An early
priority would be to establish a proper project management structure that should be staffed
with some of the most talented people in the STI.

The reform program should draw from experience of other countries that have gone through
similar reforms, and specialist assistance will be required to train STI staff in modern project
development and management techniques. There would also be a need to seek outside
expertise on other components of the modernization such as the development of information
technology, management information systems, and audit.