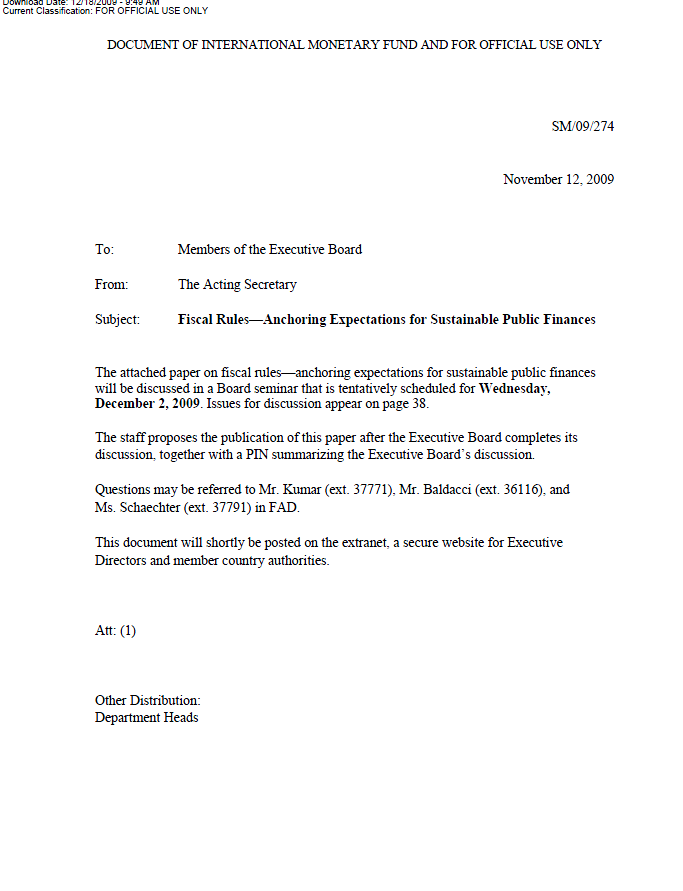 The sharp increase in fiscal deficits and public debt in most advanced and several developing economies has raised concerns about the sustainability of public finances and highlighted the need for a significant adjustment over the medium term. This paper assesses the usefulness of fiscal rules in supporting fiscal consolidation, discusses the design and implementation of rules based on a new data base spanning the whole Fund membership, and explores the fiscal framework that could be adopted as countries emerge from the crisis.

Fiscal rules have become more common in recent years. Until the early 1990s, rules were used only in a few countries: public debts accumulated during the 1970s and 1980s, and the recognition that currency unions should be supported by rule-based frameworks led more governments to subject their policies to numerical constraints. As a result, in early 2009, 80 countries had in place national or supranational fiscal rules.

The use of fiscal rules is on average associated with improved fiscal performance. While this
association may generally reflect changes in countries’ attitudes toward fiscal rectitude—
determining both the improved fiscal performance and the introduction of rules—the spread
of rules suggests their contribution to prudent fiscal policies. However, fiscal rules are often
introduced to lock-in earlier consolidation efforts rather than at the beginning of the fiscal
adjustment. Moreover, fiscal frameworks not involving formal rules but focused on
transparent and credible strategies backed by proper fiscal institutions could also provide a
viable approach to support fiscal discipline.

A rule has to be credible with regard to its ability to help deliver the required adjustment and
put debt on a sustainable path. But it should also have adequate flexibility to respond to
shocks. Simulation analysis shows that cyclically adjusted balance rules are superior in
dealing with output shocks, but cyclical adjustment requires care. The paper also discusses
the issue of coverage of rules, the extent to which rules should respond to past deviations,
and the importance of effective monitoring and enforcement procedures.

The recent crisis has strained the fiscal rules, with about a quarter of the countries with
national rules modifying them or putting them into abeyance. Looking ahead, in a period of
large consolidation needs and unusual uncertainty, the paper suggests that an early
introduction of a new rule or a rapid return to the fiscal targets implied by an existing rule
may not be appropriate, as the required speed of adjustment may be excessive. During the
transition period, a parametric approach, focused on medium-term targets, is preferable.
However, it may be helpful to design and announce early-on a credible rule-based
framework, and a timetable for its introduction or for a return to the existing rule-based path.

1. As countries exit from the crisis, the main challenge for fiscal policy is to develop
credible strategies to strengthen public finances. The sharp increase in fiscal deficits and
public debt in many countries has raised concerns about the sustainability of public finances.
These are particularly acute given the underlying fiscal challenges, such as those arising from
rapidly aging populations. There is, therefore, recognition of the need to put public finances
back on a sound footing once recovery is assured. The credibility of the needed fiscal
adjustment will be essential to anchor longer-run expectations about government solvency.

2. Fiscal rules are institutional mechanisms aimed at supporting fiscal credibility
and discipline. While longstanding experience with rules concerns mainly advanced
economies, there has been an increasing interest from emerging market and low-income
countries. This paper assesses the usefulness, design, and implementation of fiscal rules with
a view to distilling lessons and exploring available options from country experiences
worldwide. It also examines the appropriateness of a rule-based framework in the transition
from the current crisis.

3. The paper is arranged in three parts: The first part, consisting of Sections II and
III, provides a taxonomy of fiscal rules and assesses global trends; the benefits and costs of
rules, and the role they have played in past large adjustment episodes. The second part
(Section IV) explores design and implementation issues: the appropriate variable to
constrain; response to output shocks; timing of introduction and coverage; and monitoring
and enforcement mechanisms. The last part (Section V) analyzes the response of fiscal rules
to the current crisis and discusses a framework that could be implemented in the near term.
The paper concludes with the “Issues for Discussion.”