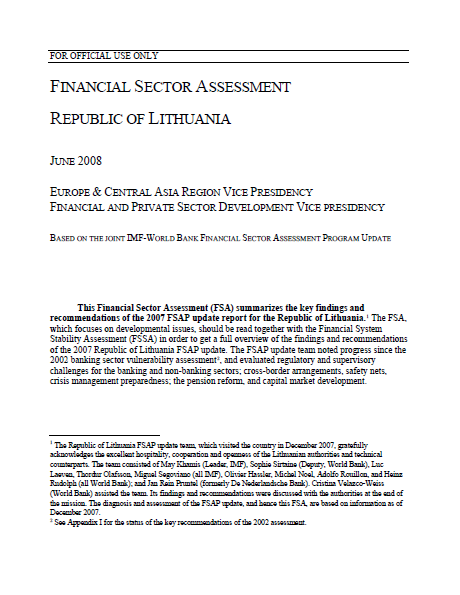 This Financial Sector Assessment (FSA) summarizes the key findings and recommendations of the 2007 FSAP update report for the Republic of Lithuania.1 The FSA, which focuses on developmental issues, should be read together with the Financial System Stability Assessment (FSSA) in order to get a full overview of the findings and recommendations of the 2007 Republic of Lithuania FSAP update. The FSAP update team noted progress since the 2002 banking sector vulnerability assessment2, and evaluated regulatory and supervisory challenges for the banking and non-banking sectors; cross-border arrangements, safety nets, crisis management preparedness; the pension reform, and capital market development.

1. Stability assessment. Lithuania’s dependence on foreign financing, coupled with its macroeconomic imbalances and the banks’ loan portfolios’ sensitivity to the domestic economic cycle, leave Lithuania vulnerable to regional and global contagion risks. Lithuania’s catch-up, in terms of per capita income, toward the European average has been impressive. This success, however, has taken place in the context of emerging macroeconomic imbalances, accompanied by a significant rise in credit growth, a tripling in real estate prices, and an increased dependence on foreign parent banks’ funding. Although the foreign banks are highly rated, these ownership linkages increase Lithuania’s vulnerability to regional and global contagion risks, especially against the backdrop of the recent global turmoil in financial markets. The large share of loans contracted with variable interest rates and in euro increases credit risk related to domestic and foreign interest and exchange rate changes, since most borrowers are not hedged. Also, the concentration of real estate loans in banks’ loan portfolios increases their vulnerability to a reversal in real estate prices. Helpfully, credit growth has slowed since mid-2006, as a result of the tightening of credit standards by banks.

2. Development issues. The regulation and supervision of NBFIs, and the governance of pension funds, should be strengthened. The banking sector regulatory and supervisory framework is in line with international standards, and the regulatory framework for non-bank financial institutions (NBFIs) is largely in conformity with European Union (EU) Directives. However, high staff turnover at the Lithuanian Securities Commission (LSC) affects its capacity to effectively supervise NBFIs. Thus, LSC must be able to pay market-based salaries to its staff and access an adequate and stable source of funding, including market fees. Also, market surveillance should be strengthened, deficiencies in IFRS implementation remedied, and the regulatory and enforcement framework for insider dealing revised. In addition, the governance structure of pension funds managed by banks and insurance companies should be strengthened to avoid conflicts of interest. Closer coordination is needed among LSC, the Insurance Supervisory Commission (ISC), and the Bank of Lithuania (BoL) to ensure adequate supervision of cross-sectoral linkages between financial institutions. The government’s review of the overall financial sector supervisory structure is welcome in this regard.

3. Opportunities to further develop the capital markets and improve the pension system should be seized. MiFID offers opportunities for Lithuanian issuers but requires the development of regulation for missing financial instruments. The pension reform’s efforts would benefit from revisions in portfolio investment and disclosure regulations, as well as to the pension system infrastructure. Further progress in the areas of lender of last resort, bank resolution, creditors’ rights, insolvencies, and housing finance also would be helpful.

2. Until recently, leasing has been the largest segment of the non-bank sector. There are 12 leasing companies, all subsidiaries of banks, with a total portfolio as of July 1, 2007 of 8.4 billion litas or around10 percent of GDP, growing at an average rate of 48 percent a year over the last six years. Two of the largest leasing companies, Hansa Leasing and SEB Leasing, dominate with 42 and 36 percent of the market respectively. Leasing companies are funded by the direct parent company up to a limit of 75 percent of the capital of the parent company, and by their foreign parent, where applicable, up to 20 percent of the capital. The funding for the two largest companies is mostly in euros. Financial leasing is the most used form of leasing (95 percent of all contracts) largely to the corporate sector. The main categories of leased objects are: (i) heavy vehicles for commercial transport (37 percent); (ii) industrial equipments (30 percent); (iii) cars (18 percent; and 4 percent private/family cars), and (iv) commercial real estate (15 percent).

3. The non-bank financial sector is still very small but has been growing in recent years. Since their introduction in 2004, second pillar pension schemes accumulated assets at a rapid rate. The third pillar, however, has attracted less enthusiasm, but the government has introduced recently tax advantage for all third pillar savings. Currently 16 second pillar and six third pillar pension funds operate with total assets of around 280 million litas (81 million euros). Compulsory motor third-party liability insurance, introduced in June 2001, and the introduction of UCITs in November 2004 have also contributed to the growth of the NBFI sector. Finally, the rapid growth of mortgage loans has spurred the growth of mortgage insurance.
Supervisory Framework

4. The BoL is the banking supervisory authority. It has the mandate to conduct both individual and consolidated supervision of banks and their financial groups, including domestic banks’ foreign subsidiaries. The BoL also has the right to conduct consolidated supervision if the parent company in the financial group is a controlling (holding) company where the group includes a bank licensed by the BoL. The leasing sector is not regulated or supervised except where leasing companies are subsidiaries of banks. 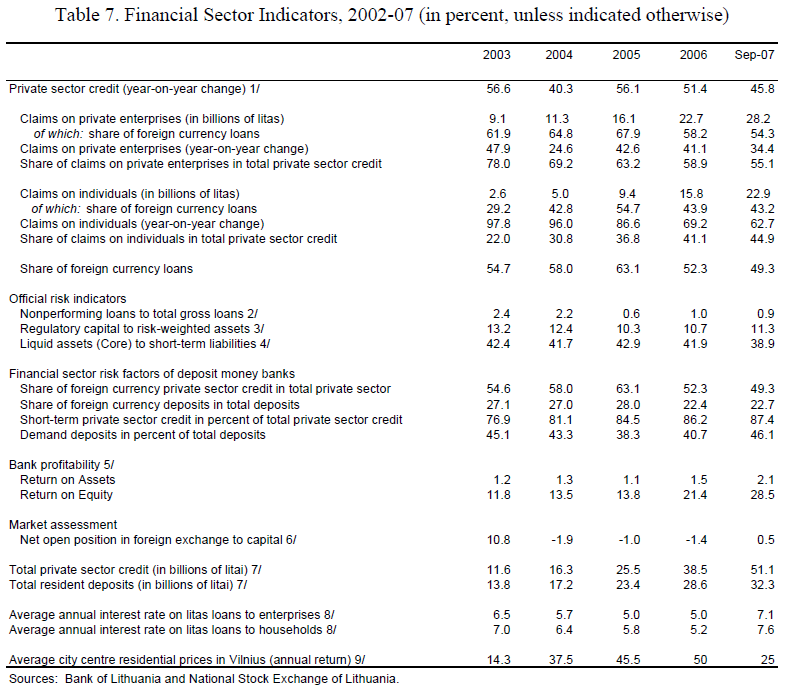