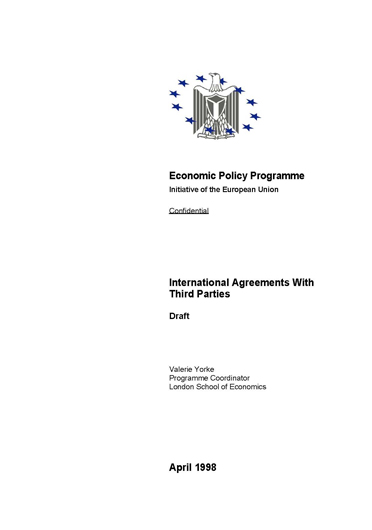 1.The scope of PLO/PA authority in the field of trade policy and therefore in trade relations with third parties is circumscribed by the terms of the Interim Agreement, signed by the PLO/Israel in Washington on September 28, 1995. (1) The relevant parts of the Agreement which together form the legal basis for the PA’s relations with third parties are found at Article IX and in the Economic Protocol at Annex V. (The Economic Protocol, which defines the Israeli-PLO/PA economic relationship, was signed in Paris on April 29, 1994 and subsequently incorporated with modifications in the Interim Agreement as Annex V.)

2.The limits of PA competence with regard to forging trade relations with third parties are set out in Article IX of the Interim Agreement according to which:

“the PLO may conduct negotiations and sign agreements with states or international organisations for the benefit of the Council in the following cases only:

3.Those areas of import policy which might potentially be the subject of signed agreements between the PA/PLO and third parties are set out in Annex V i.e. the Paris Protocol. According to the Protocol the PLO/PA and Israel must generally apply the same import policy, that of Israel, but the PLO/PA is granted some independent trade policy making authority which is set out in precise terms:-

* It may set at a lower level (than Israeli rates) customs duty and other charges on imports of goods specified in Lists A1, A2 and B subject to provisions relating to origin and quantity in the cases of
lists A1 and A2, and without quantitative restriction in List B. Special provisions designed to prevent re-export apply to the import of motor vehicles and petroleum products.

* In addition it may decide on an upward change in the Israeli rates of customs, purchase tax, levies, excise and import charges on all goods not specified in Lists A1, A2 and B, and to quantities exceeding those agreed upon with regard to products in list A1 and A2. The above exceptions relating to imports from third parties (and there are other deviations relating to mutual trade) amount to deviations from a customs union concept and it is the scope that these provide for the Palestinians to set their own import regime with third parties that we are concerned with here.

4. The fact is that the Paris Protocol does not provide for a full, but rather a semi-customs union and it does not prevent the Palestinian areas from being legally identified as a separate customs territory.

(2) In short it is unclear from its wording whether the Paris Protocol provides for a customs union or a free trade agreement.

(2A) Palestinian and Israeli interpretations

5.The Preamble of the Protocol provided inter alia for the Palestinian side “exercising its right of economic decision making in accordance with its own development plan and priorities” and recognised its “economic ties with other markets”. Despite this intention, and the spirit in which it was agreed, the enactment on the ground of the Protocol’s provisions has revealed sharp differences with regard to the two sides’ interpretations of the scope – as set out in the Interim Agreement – for PA decisonmaking in trade relations with third parties. The differing interpretations, not surprisingly, reflect the respective political goals as well as the economic interests of the two sides . PLO/PA agreements with third parties EC-PLO Interim Association Agreement

6.Israeli-PLO differences have been brought to a head with the signing and implementation of the EC-PLO Interim Association Agreement. Israeli officials regard the agreement as a breach of Article IX of the Interim Agreement, which they argue does not permit the PA to enter into independent trade agreements. (2B) In February the Israeli Foreign Ministry’s deputy directorgeneral for economic affairs, Victor Harel, voiced his concern at the European Council of Ministers’ call for the full and rapid implementation of the EC-PLO agreement, which Israel argues also encourages the contravention of the Paris Protocol.

7. Israeli objections to the EC-PLO agreement on economic/technical grounds are as follows:

i)EC-PLO agreement is a de jure instrument that creates a separation between Palestinian and Israeli markets by treating the Palestinian areas as a separate trading entity with borders, thereby negating the Paris accords, which established the notion of a single Israeli-Palestinian territory” (3), or in current Israeli parlance “single customs envelope”.

iv) As a consequence of ii) Israel argues that “industrial cooperation” between Israel and the Palestinian areas with regard to manufacturing aimed at the European market will be inhibited. The Israeli view is that the Palestinians have more to lose economically than Israel from this development. This, Israelis say, is because Israel’s exports to Europe that depend on de facto cumulation with the WBGS are marginal in relation to its total exports to the EU, while the Palestinians stand to lose thousands of potential job opportunities with the end of de facto cumulation – their goods will not qualify for duty free exemption in Europe without the benefit of cumulation.

v) Israel regrets this development since it wants, it maintains, to develop job opportunities in the Palestinian areas in the interest of economic symbiosis, Palestinian economic development and the peace process. The textile industry in particular will be hard hit. Despite Israel’s good marketing and production skills, the industry is not competitive in global markets. If Israel loses its de facto cumulation link with the Palestinian areas where it currently benefits from cheap labour, Israeli producers will have to go to Pakistan or Turkey etc.

vi) The PA will have to operate as an independent entity with its own border controls – difficult to achieve in current circumstances, says Israel.

8. Israeli interviewees also concede that there is an important political dimension to the above objections, namely that because the EC-PLO accord is a free trade agreement between entities with implied borders it works against the spirit of the Oslo accords: The Interim Agreement (Article 00) agreed that borders would be decided in final status talks and, consistent with this, the Paris Protocol creates a semi customs union with no borders between Israel and the Palestinian areas. Israel argues that in concluding a free trade agreement of this kind with the EC the Palestinians are not using the Oslo transitional period, as was intended, namely to build confidence through economic cooperation, but rather to acquire symbols of statehood.

9. However, the Palestinians consider that the Israelis also downplay the economic reasons for its opposition to the EC/PLO accord. The EU is Israel’s closest market and absorbs 60% of its agricultural exports. If the Palestinians were able to export their agricultural products directly to EU member states, these would compete with Israeli products.