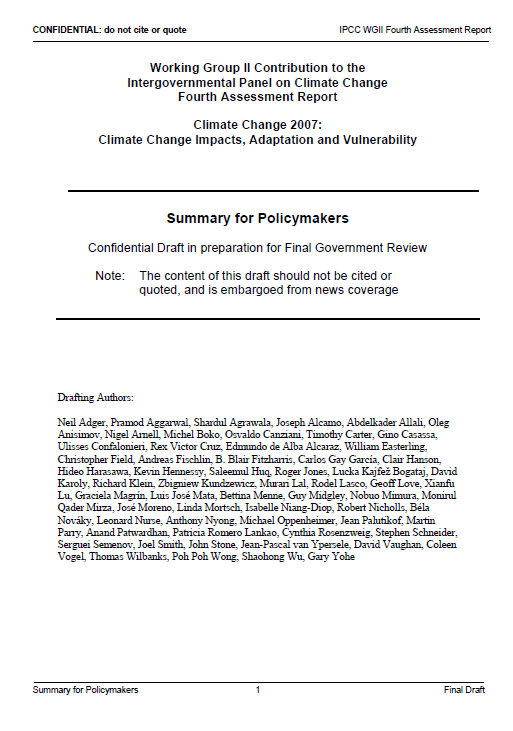 1 A. Introduction
2
3 This Summary sets out the key policy-relevant findings of the Fourth Assessment Report of Working Group
4 II of the Intergovernmental Panel on Climate Change (IPCC).
5
6 The Assessment is of current scientific understanding of impacts of climate change on natural, managed and
7 human systems, their capacity to adapt and their vulnerability1. It builds upon past assessments and
8 incorporates new knowledge gained since the Third Assessment.
9
10 Statements in this Summary are based on chapters in the Assessment and sources are given at the end of
11 each paragraph2.
12
13 B. Current knowledge about observed impacts in natural and
14 managed systems
15
16 The number of studies of observed trends in the physical and biological environment and their relationship to
17 regional climate changes has increased greatly in the past five years, as has the quality of the data sets. This
18 allows a broader and more confident assessment of the relationship between observed warming and impacts
19 than was made in the IPCC Third Assessment, which concluded that “there is high confidence3 that recent
20 regional changes in temperature have had discernible impacts on many physical and biological systems”.
21 From the current Assessment we conclude the following.
22
23 Many natural systems, on all continents and in some oceans, are being affected by regional
24 climate changes, particularly temperature increases [very high confidence].
25
26 With regard to changes in physical systems, there is high confidence that changes in the cryosphere are
27 affecting natural systems, such as:
28 • enlargement and increased numbers of glacial lakes, with increased risk of outburst floods [1.3];
29 • increasing ground instability in mountain and other permafrost regions, and ice and rock avalanches
30 in mountain regions [1.3.];
31 • changes in some Arctic and Antarctic flora and fauna, including sea-ice biomes and predators high
32 in the food chain [1.3, 4.4, 15.4].
33
34 There is high confidence that hydrological systems are also being affected, for example:
35 • enhanced run-off and earlier spring peak discharge in many glacier- and snow-fed rivers [1.3];
36 • lakes and rivers in many regions are warming, with effects on thermal structure and water quality
37 [1.3, 15.2].
38
39 With regard to changes in biological systems, there is very high confidence that observed changes in some
40 terrestrial species are linked to higher temperatures, including such changes as:
41 • earlier timing of spring events, such as leaf-unfolding, bird migration and egg-laying [1.3.];
42 • poleward and upward shifts in ranges in plant and animal species [1.3, 8.2, 15.4].
43
44 Based on satellite observations since the early 1980s, there is high confidence that there has been a
45 trend in many regions towards earlier ‘greening’4 of vegetation in the spring and increased net primary
46 production linked to longer growing seasons and increasing atmospheric CO2 concentrations. [1.3, 14.2]

1 There is high confidence that extensive changes observed in marine and freshwater biological systems are
2 associated with rising water temperatures, as well as related changes in ice cover, salinity, oxygen levels, and
3 circulation [1.3]. These include:
4 • poleward shifts in ranges and changes in algal, plankton and fish abundance in high-latitude oceans
5 [1.3];
6 • increases in algal and zooplankton abundance in high-latitude and high-altitude lakes [1.3];
7 • earlier fish migrations and range changes in rivers [1.3].
8
9 Observed effects of recent ocean acidification on the marine biosphere are as yet undocumented. [1.3]
10
11 At the global scale the anthropogenic component of warming over the last three decades
12 has had a discernible influence on many physical and biological systems [high confidence].
13
14 Much more evidence has accumulated over the past five years to indicate that the effects described above are
15 linked to the anthropogenic component of warming5. There are three sets of evidence which, taken together,
16 support this conclusion [Box SPM-1]:
17 1. There have been several studies that have linked responses in some physical and biological systems
18 to the anthropogenic component of warming by comparing observed trends with modelled trends in
19 which the natural and anthropogenic forcings are explicitly separated. [1.4]
20 2. Observed changes in many physical and biological systems are consistent with a warming world.
21 The majority (>85% of the >29,000 datasets whose locations are displayed in Figure SPM-1) of
22 changes in these systems has been in the direction expected as a response to warming. [1.4]
23 3. A global synthesis of studies in this Assessment strongly demonstrates that the spatial agreement
24 between regions of significant regional warming across the globe and the locations of significant
25 observed changes in many systems consistent with warming is very unlikely6 to be due solely to
26 natural variability of temperatures or natural variability of the systems. [1.4]
27
28 Limitations and barriers remain in the evidence chain that would permit full causal linkage of the observed
29 system responses to anthropogenic warming. First, the few analyses that have been performed are limited in
30 the number of systems and locations considered. Second, natural temperature variability is larger at the
31 regional than the global scale, thus affecting identification of changes due to external forcing. Finally, at the
32 regional scale other factors (such as land-use change, pollution, and invasive species) complicate the issue.
33 [1.4]
34
35 Nevertheless, the consistency between observed and modelled changes in several studies and the spatial
36 agreement between significant regional warming and consistent impacts at the global scale is sufficient to
37 conclude with high confidence that the anthropogenic component of warming over the last three decades has
38 had a discernible influence on many physical and biological systems. [1.4]
39
40 Effects of regional temperature increases on some managed and human systems are
41 emerging, although these are more difficult to discern than those in natural systems due to
42 adaptation and non-climatic drivers [medium confidence].
43
44 Those managed and human systems where there is some evidence of effects from regional increases in
45 temperature include the following:
46 • some coastal zones affected by erosion due to sea-level rise [1.3];
47 • effects on agricultural and forestry management at northern higher latitudes, such as earlier spring
48 planting [1.3];
49 • some aspects of human health, such as heat-related mortality in Europe and Asia, infectious disease
50 vectors in some areas, and allergenic pollen in northern mid-latitudes [1.3, 8.2, 8.ES];
51 • some human activities in the Arctic (such as aspects of indigenous livelihoods and shorter vehicle
52 travel seasons) and in lower-elevation alpine areas (such as mountain sports). [1.3] 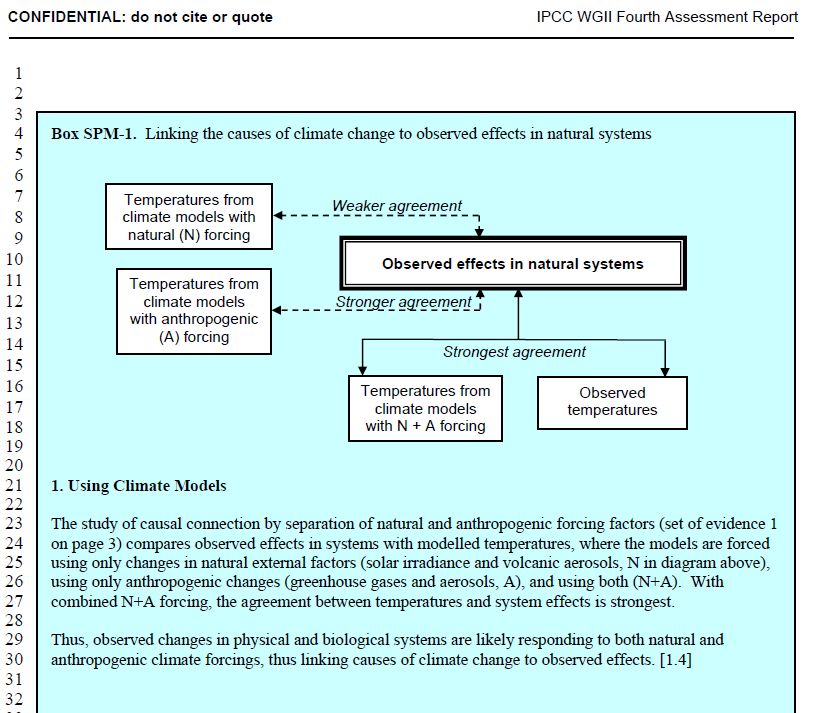 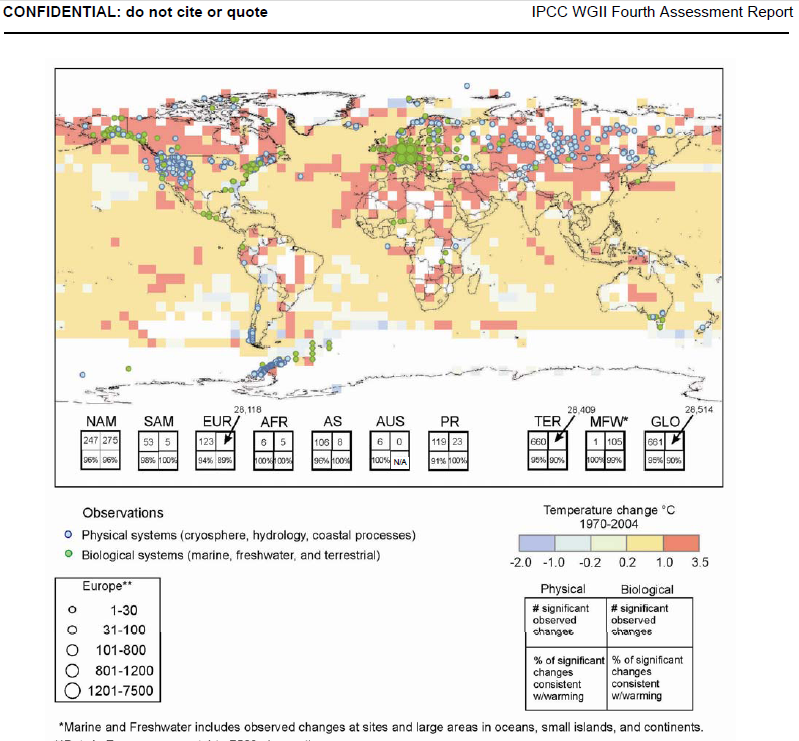