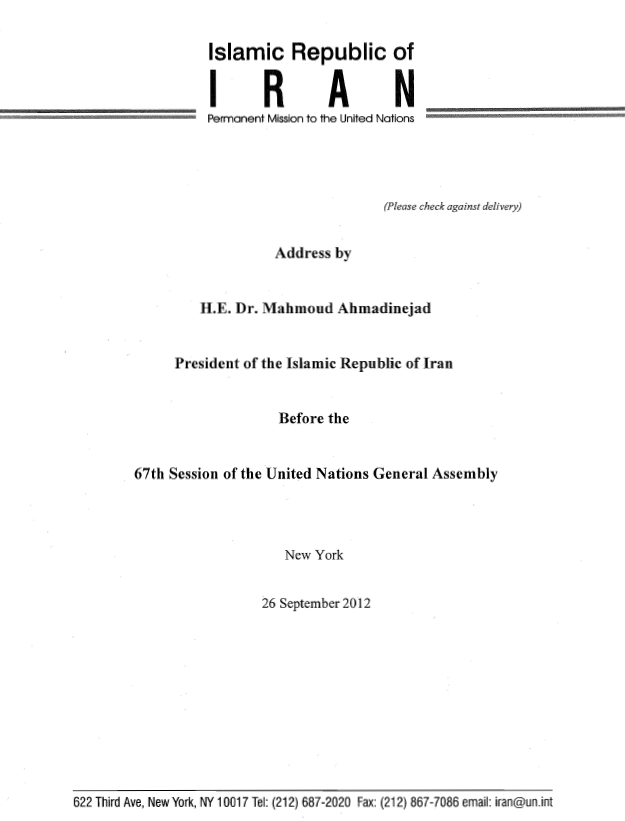 Address by H.E. Dr. Mahmoud Ahmadinejad President of the Islamic Republic of Iran Before the 67th Session of the United Nations General Assembly

I have talked in the past seven years about the current challenges, solutions and prospects of the future world. Today I want to raise and discuss such issues from a different perspective.

Thousands of years has passed since children of Adam (peace be upon Him) started to settle down in various parts of Earth.

Peoples of different colors, tastes, languages, customs and traditions pursued persistently to fulfill their aspirations to build a noble society for a more beautiful life blessed with lasting peace, security and happiness.

Despite all efforts made by righteous people and justice seekers, and the sufferings and pains endured by masses of people in the quest to achieve happiness and victory, the history of mankind, except in rare cases, is marked with unfulfilled dreams and failures.

Imagine for a moment:

-Had there been no egoism, distrust, malicious behaviors, and dictatorships with no one violating the rights of others;

– Had humanitarian values been viewed as the criterion for social dignity in place of affluence and consumerism,

– Had humanity not experienced the dark age of medieval periods, and centers of power not hindered the flourishing of knowledge and constructive thoughts,

– Had the wars of Crusade and the ensuing periods of slavery and colonialism not happened, and had the inheritors of these dark periods followed a course on the premises of humanitarians principles,

– Had the first and second World Wars in Europe, the wars in Korea, Vietnam, Africa, Latin America, and in the Balkans not happened, and if instead of the occupation of Palestine and imposition of a fake government, displacement and genocide of millions of people around the globe, the truth behind these wars had been revealed based on justice,

– Had Saddam Hussein not invaded Iran, and had the big powers supported the rights of Iranian people instead of siding with Saddam,

– If the tragic incident of September 11, and the military actions against Afghanistan and Iraq that left millions killed and homeless had not happened, and if, instead of killing and throwing the culprit into the sea without trial or without informing the world and people of America, an independent fact-finding team had been formed to make the general public aware of the truth behind the incident, and prepare for bringing to justice the perpetrators,

– Had extremism or terrorism not been used to secure political goals,

– Had the arms been turned into pens, and military expenditures been used to promote well-being and amity among nations,

– Had the drum of ethnic, religious or racial conflicts not been beaten, and if differences had not been used for the purpose of advancing political agendas,

– Had the right to criticize the hegemonic policies and actions of the world Zionism been recognized to allow the world media to freely report and shed light on the realities, instead of taking deceitful gestures of backing freedom bent on offending the sanctities and most sacred beliefs of human beings and divine messengers, who as the purest and most compassionate human beings are the gift of the Almighty to humanity,

– Had the Security Council not been under the domination of a limited number of governments, thus disabling the United Nations to carry out its responsibilities on a just and equitable basis,

– If the international economic institutions had not been under pressure and were allowed to perform their duties and functions by using their expertise based on fairness and justice,
Had the world capitalists not weakened or victimized the economies of nations in order to make up for their own mistakes,

– If integrity and honesty had prevailed on the international relations, and all nations and governments were treated equally and justly in the global efforts to build and expand happiness for the entire mankind,

– And if tens of other unfavorable situations had not occurred in human life,

– Imagine how beautiful and pleasant our lives and how lovely the history of mankind would have been.