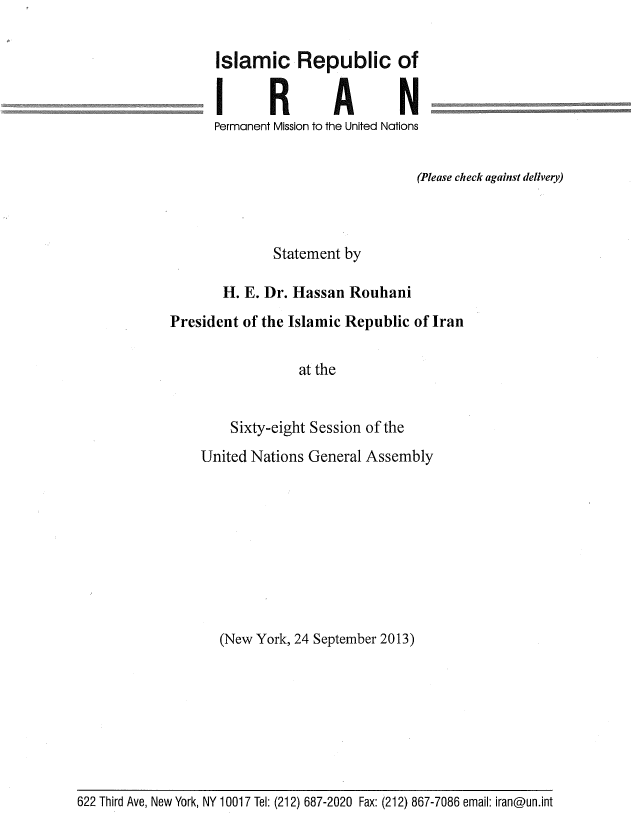 Statement by H. E. Dr. Hassan Rouhani President of the Islamic Republic of Iran at the Sixty-eight Session of the United Nations General Assembly

At the outset, I would like to offer my most sincere felicitations on your deserved election to the presidency of the General Assembly and seize the moment to express appreciation for the valuable efforts of our distinguished Secretary-General.

Our world today is replete with fear and hope; fear of war and hostile regional and global relations; fear of deadly confrontation of religious, ethnic and national identities; fear of institutionalization of violence and extremism; fear of poverty and destructive discrimination; fear of decay and destruction of life-sustaining resources; fear of disregard for human dignity and rights; and fear of neglect of morality. Alongside these fears, however, there are new hopes; the hope of universal acceptance by the people and the elite all across the globe of “yes to peace and no to war”; and the hope of preference of dialogue over conflict, and moderation over extremism.

The recent elections in Iran represent a clear, living example of the wise choice of hope, rationality and moderation by the great people of Iran. The realization of democracy consistent with religion and the peaceful transfer of executive power manifested that Iran is the anchor of stability in an otherwise ocean of regional instabilities. The firm belief of our people and government in enduring peace, stability, tranquility, peaceful resolution of disputes and reliance on the ballot box as the basis of power, public acceptance and legitimacy, has indeed played a key role in creating such a safe environment.

The current critical period of transition in international relations is replete with dangers, albeit with unique opportunities. Any miscalculation of one’s position, and of course, of others, will bear historic damages; a mistake by one actor will have negative impact on all others. Vulnerability is now a global and indivisible phenomenon.

At this sensitive juncture in the history global relations, the age of zero-sum games is over, even though a few actors still tend to rely on archaic and deeply ineffective ways and means to preserve their old superiority and domination. Militarism and the recourse to violent and military means to subjugate others are failed examples of the perpetuation of old ways in new circumstances.

Coercive economic and military policies and practices geared to the maintenance and preservation of old superiorities and dominations have been pursued in a conceptual mindset that negates peace, security, human dignity, and exalted human ideals. Ignoring differences between societies and globalizing Western values as universal ones represent another manifestation of this conceptual mindset. Yet another reflection of the same cognitive model is the persistence of Cold War mentality and bi-polar division of the world into “superior us” and “inferior others.” Fanning fear and phobia around the emergence of new actors on the world scene is another. In such an environment, governmental and non-governmental, religious, ethnic, and even racial violence has increased, and there is no guarantee that the era of quiet among big powers will remain immune from such violent discourses, practices and actions. The catastrophic impact of violent and extremist narratives should not – in fact, must not – be underestimated. In this context, the strategic violence, which is manifested in the efforts to deprive regional players from their natural domain of action, containment policies, regime change from outside, and the efforts towards redrawing of political borders and frontiers, is extremely dangerous and provocative.

The prevalent international political discourse depicts a civilized center surrounded by un-civilized peripheries. In this picture, the relation between the center of world power and the peripheries is hegemonic. The discourse assigning the North the center stage and relegating the South to the periphery has led to the establishment of a monologue at the level of international relations. The creation of illusory identity distinctions and the current prevalent violent forms of xenophobia are the inevitable outcome of such a discourse. Propagandistic and unfounded faith-phobic, Islamo-phobic, Shia-phobic, and Iran-phobic discourses do indeed represent serious threats against world peace and human security.

This propagandistic discourse has assumed dangerous proportions through portrayal and inculcation of presumed imaginary threats. One such imaginary threat is the so-called “Iranian threat” -which has been employed as an excuse to justify a long catalogue of crimes and catastrophic practices over the past three decades. The arming of the Saddam Hussein regime with chemical weapons and supporting the Taliban and A1-Qaida are just two examples of such catastrophes. Let me say this in all sincerity before this august world assembly, that based on irrefutable evidence, those who harp on the so-called threat of Iran are either a threat against international peace and security themselves or promote such a threat. Iran poses absolutely no threat to the world or the region. In Fact, in ideals as well as in actual practice, my country has been a harbinger of just peace and comprehensive security.