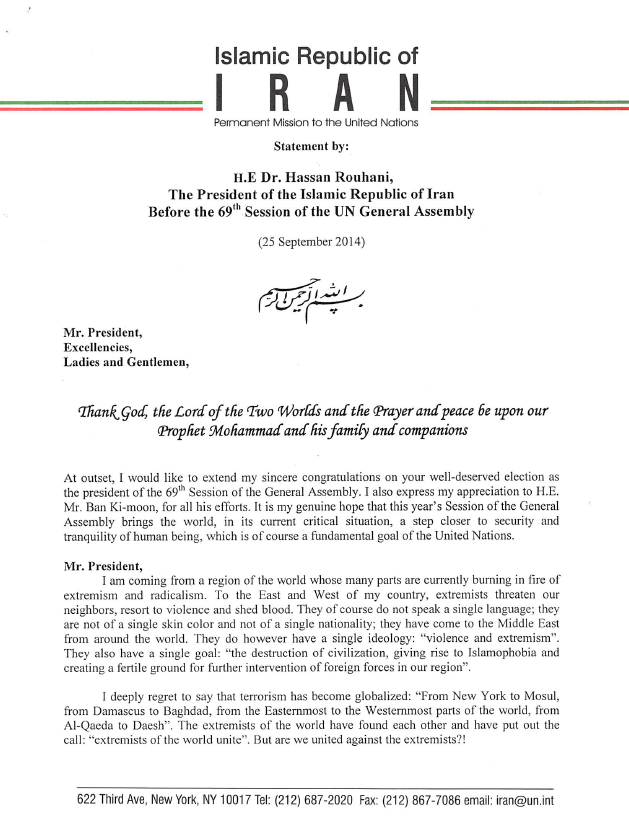 Statement by H.E. Dr. Hassan Rouhani, The President of the Islamic Republic of Iran Before the 69th Session of the UN General Assembly

I am coming from a region of the world whose many parts are currently burning in fire of extremism and radicalism. To the East and West of my country, extremists threaten our neighbors, resort to violence and shed blood. They of course do not speak a single language; they are not of a single skin color and not of a single nationality; they have come to the Middle East from around the world. They do however have a single ideology: “violence and extremism”. They also have a single goal: “the destruction of civilization, giving rise to Islamophobia and creating a fertile ground for further intervention of foreign forces in our region”.

Extremism is not a regional issue that just the nations of our region would have to grapple with; extremism is a global issue. Certain states have helped creating it and are now failing to withstand it. Currently our peoples are paying the price. Today’s anti-Westernism is the offspring of yesterday’s colonialism. Today’s anti-Westernism is a reaction to yesterday’s racism. Certain intelligence agencies have put blades in the hand of madmen, who now spare no one. All those who have played a role in founding and supporting these terror groups must acknowledge their errors that have led to extremism. They need to apologize not only to the past but also to the next generation.

To fight the underlying causes of terrorism, one must know its roots and dry its source fountains. Terrorism germinates in poverty, unemployment, discrimination, humiliation and injustice. And it grows in the culture of violence. To uproot extremism, we must spread justice and development and disallow the distortion of divine teachings to justify brutality and cruelty. The pain is made greater when these terrorists spill blood in the name of religion and behead in the name of Islam. They seek to keep hidden this incontrovertible truth of history that on the basis of the teachings of all divine prophets, from Abraham and Moses and Jesus to Mohammed, taking the life of a single innocent life is akin to killing the whole humanity. I am astonished that these murderous groups call themselves Islamic. What is more astonishing is that the Western media, in line with them, repeats this false claim, which provokes the hatred of all Muslims. Muslim people who everyday recall their God as merciful and compassionate and have learned lessons of kindness and empathy from their Prophet, see this defamation as part of a Islamophobic project.

The strategic blunders of the West in the Middle-East, Central Asia, and the Caucuses have turned these parts of the world into a haven for terrorists and extremists. Military aggression against Afghanistan and Iraq and improper interference in the developments in Syria are clear examples of this erroneous strategic approach in the Middle East. As non-peaceful approach, aggression, and occupation target the lives and livelihoods of ordinary people, they result in different adverse psychological and behavioral consequences that are today manifested in the form of violence and murder in the Middle East and North Africa, even attracting some citizens from other parts of the world. Violence is currently being spread to other parts of the world like a contagious disease. We have always believed that democracy cannot be transplanted from abroad; democracy is the product of growth and development; not war and aggression. Democracy is not an export product that can be commercially imported from the West to the East. In an underdeveloped society, imported democracy leads only to a weak and vulnerable government.

When Generals step into a region, do not expect diplomats to greet them warmly; when war begins, diplomacy tends to end. When sanctions set in, deep hatred for those imposing them also begins. When the atmosphere of the Middle East is securitized, the answer will be of the same nature as well.

The interests of Western countries in our region are tied to their recognition of beliefs and the desire of the people for democratic governance in the region. Our region expects that the Western world would once and for all place itself in the company of those true seekers of democracy, and, hence, soften the bitter memories of its support for dictators. The experience of creation of Al-Qaeda, the Taliban, and modem extremist groups have demonstrated that one cannot use extremist groups to counter an opposing state and remain impervious to the consequences of rising extremism. The repetition of these mistakes despite many costly experiences is perplexing.

Let’s recall that Iran had invited everyone to “dialogue” before the criminal act of September 11th, and also called for “a world against violence and extremism” before the outbreak of the current violent atrocities. Perhaps in the past year, few people could forecast the fire that would rage today. But now uninhibited violence and extremism presents an imminent threat to the world. It is self-evident that without an accurate understanding of how the current condition came about we will not be able to find the right solutions. Today, again, I shall warn against the spread of extremism and the danger posed by the inadequate understanding and incorrect approach to this phenomenon.

The Middle East longs for development and is weary of war. It is the natural right of the peoples of the fertile lands of the Middle Bast to live in peace and prosperity. In the past, colonialism denied them this right and, today, the shadow of war and violence threatens their security. There are moderate politicians and elites in our region who enjoy the confidence of their peoples. They are neither anti-Western nor pro-Western. While aware of the role of colonialism in the backwardness of their nations, they are not neglectful of the role of their nations in reaching the development they seek. They do not absolve the West from its misdeeds, but are also aware of their own failings. These leaders can take positions of active leadership by attracting the confidence of the people in their societies and establish the strongest national and international coalitions against violence.

The voices of these leaders are the true voices of moderation in the Islamic world; the familiar sound of an Afghan tired of war; an Iraqi victim of extremism, a Syrian fearful of terrorism; and a Lebanese worried over violence and sectarianism. I believe if countries claiming leadership of the coalition, do so to continue their hegemony in the region, they would make a strategic mistake. Obviously, since the pain is better known by the countries in the region, better they can form coalition, and accept to shoulder the responsibility of leadership to counter violence and terrorism. And if other nations wish to take action against terrorism, they must come to their support.

I warn that if we do not muster all our strengths against extremism and violence today, and fail to enlist the job to the people in the region who can deliver, tomorrow the world will be safe for no one.