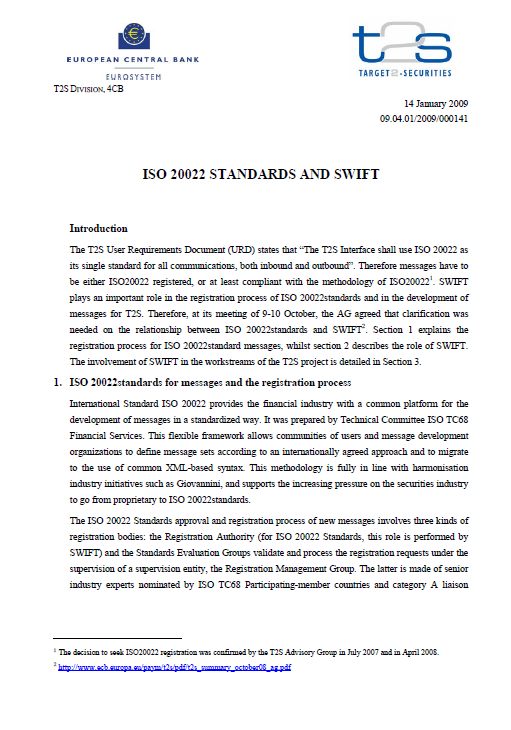 The T2S User Requirements Document (URD) states that “The T2S Interface shall use ISO 20022 as its single standard for all communications, both inbound and outbound”. Therefore messages have to be either ISO20022 registered, or at least compliant with the methodology of ISO200221. SWIFT plays an important role in the registration process of ISO 20022standards and in the development of messages for T2S. Therefore, at its meeting of 9-10 October, the AG agreed that clarification was needed on the relationship between ISO 20022standards and SWIFT2. Section 1 explains the registration process for ISO 20022standard messages, whilst section 2 describes the role of SWIFT. The involvement of SWIFT in the workstreams of the T2S project is detailed in Section 3.

1. ISO 20022standards for messages and the registration process

International Standard ISO 20022 provides the financial industry with a common platform for the
development of messages in a standardized way. It was prepared by Technical Committee ISO TC68
Financial Services. This flexible framework allows communities of users and message development
organizations to define message sets according to an internationally agreed approach and to migrate
to the use of common XML-based syntax. This methodology is fully in line with harmonisation
industry initiatives such as Giovannini, and supports the increasing pressure on the securities industry
to go from proprietary to ISO 20022standards.

registration process and reports directly to ISO TC68. The Standards Evaluation Groups are made up
of industry experts in specific business domains of the financial industry as defined by the
Registration Management Group, and their members are nominated by ISO TC68 member countries
and liaison organisations.

1) The entry point of the registration process is the preparation of a ‘Business Justification’ by the submitting organisation.
It must describe the high level scope of the messages to be developed and the reason why they are needed (potential
communities of users, expected benefits). In the case of T2S, submission will be done jointly by 4CB4 and SWIFT
Standards.5

2) The registration management group reviews the business justification, who decides whether the proposed development
fits into the ISO 20022 spectrum, does not duplicate the already existing messages and is indeed beneficial to the
community.

3) If approved, the business justification is then forwarded to the assigned Standards Evaluation Group(s) which reviews and
endorses the scope, and checks that the right organisations are involved in the development.

4) The submitting organisation starts developing ISO 20022 compliant business and message models. The RA closely assists
the submitter during this phase. When the development is completed, the Registration Authority generates the XML
schemas and with the submitter prepares a comprehensive documentation for the Standards Evaluation Group(s).

6) When/if the Standards Evaluation Group(s) approves the messages, the Registration Authority changes the provisional
registration status to an official registration status in the ISO 20022 Data Dictionary and publishes the new ‘ISO 20022
messages’ in the Business Process Catalogue on www.iso20022.org.

7) When messages are first piloted or implemented, first users are invited to comment on the ‘technical implementability’ of
the messages and the accuracy of the documentation published on the website. Possible changes or corrections requested by first implementers will be evaluated by the Standards Evaluation Group(s), the Registration Authority and the submitter and
may lead to changes to the messages and/or documentation.

All along, the Registration Management Group monitors the work and if need be, arbitrates any disputes.
For already existing messages, that require an update/adaptation, a simpler version of this procedure is followed
(change request).

SWIFT is involved in the development of new standards in several capacities: as a registration
authority in the registration process, and as a standards authority for the benefit of a community of
users.

As a developer of standards, SWIFT accompanies the evolution of its community’s business
requirements. These requirements go from the development of an end-to-end approach, to the use of
new technologies or, ultimately, a single industry standard in the long term. For this purpose, the
working approach integrates the financial institutions at each stage of the development process, such
as the scope, modelling, building or validation.
Registration authority

In addition, SWIFT plays an important role in the transition between ISO 15022 and ISO 20022
standards, the so-called business reverse-engineering. SWIFT Standards was requested by its
community to develop ISO 20022 messages equivalent to ISO 15022 to allow ‘newcomers’ to directly
adopt ISO 20022. To limit the impact on existing ISO 15022 users, the ISO 20022 messages will be
directly reversed engineered from ISO 15022 messages. SWIFT will ensure to design the ISO 20022
messages with mapping to ISO 15022 in mind to ensure the same levels of STP as today, limit the
ISO 20022 functionality to the functionality available in ISO 15022 during the coexistence period,
synchronise the maintenance between the 2 standards in terms of timing, review process and content,
and provide coexistence support.