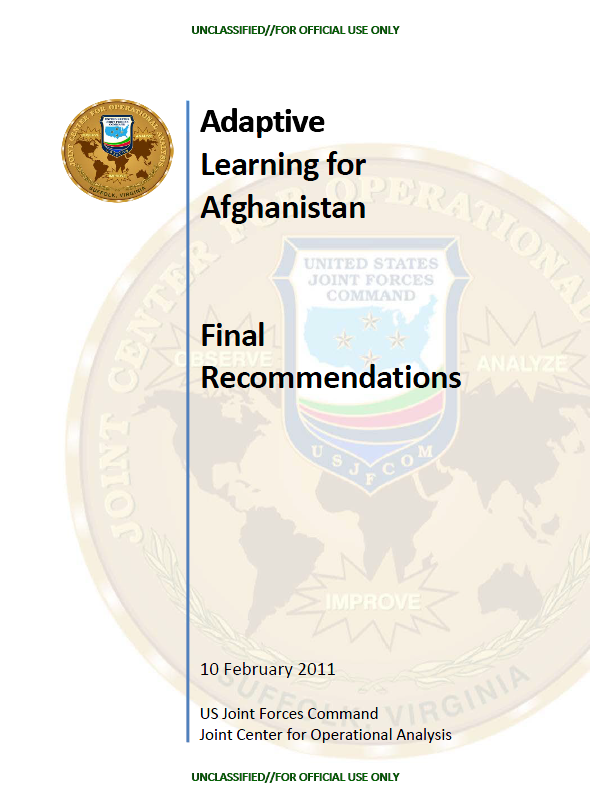 (U//FOUO) Building on several previously completed studies of civilian casualties (CIVCAS) in Afghanistan, the US Joint Forces Command (JFCOM) Joint Center for Operational Analysis (JCOA) partnered with Ms. Sarah Sewall of Harvard University to conduct an independent and comprehensive assessment of civilian casualties, the Joint Civilian Casualty Study, published in August 2010. The Commander, International Security Assistance Force (COMISAF), responded to this assessment by stating that more work was needed to ensure that the DOTMLPF changes required to reduce and mitigate CIVCAS were institutionalized. Accordingly, COMISAF requested that JCOA, with the support of the Services, conduct a study to “examine the institutionalization of CIVCAS lessons learned into US forces’ preparation for deployment, with a focus on the unique context of Afghanistan.” That study, Adaptive Learning for Afghanistan (ALA), examined ways in which lessons and adaptations in theater were captured, shared, and incorporated into force preparation. In this respect, ALA was not “another CIVCAS study,” but rather, it used CIVCAS as a test case for characterizing the overall process of adaptive learning.

(U) The ALA study team conducted a thorough review of policy, procedures, and practices, followed by visits to Afghanistan and US-based institutions. The team reviewed about 1,000 documents and conducted over 200 interviews. Appendix A contains a list of locations visited in support of the study. The team reviewed in-theater development and sharing of lessons, the translation of those lessons into preparations for deployment, and joint and Service support to unit pre-deployment preparations and training.

(U) JCOA provided its initial study product, ALA Quick Impact Recommendations, to COMISAF in December 2010. This paper was comprised of recommendations to improve the in-theater lessons learned (LL) processes and further reduce CIVCAS beyond efforts that had already been put in place. The International Security Assistance Force (ISAF), in conjunction with individual troop-contributing nations, began implementing many of the recommendations contained in that paper. The ALA final brief was provided to COMISAF in late January 2011. This paper is a summary of key insights from the final brief and expounds upon the major recommendations to provide context and aid implementation.

Example: Civilian Casualties in Afghanistan (U)

(U//FOUO) One example of the importance of effective force preparation, learning, and adaptation in operational success is the issue of coalition-caused civilian casualties in Afghanistan. Since 2005, the issue of civilian casualties has had increasing impact on operations in Afghanistan. In response, US commanders LTG Barno, GEN McNeill, and GEN McKiernan all issued guidance to help reduce civilian casualties, but the issue remained. GEN McChrystal, upon taking command of ISAF in mid-2009, made reduction of civilian casualties a point of emphasis and issued additional guidance to ISAF forces. This leadership emphasis and guidance caused ISAF forces to change and adapt their operations to comply with COMISAF intent. Further, this intent and guidance was received by forces preparing to deploy, and the Services’ pre-deployment preparations began to include ways to operationalize the guidance.

(U//FOUO) During an in-theater visit in April 2010, it was evident that forces had made a number of adaptations to TTP and planning processes in order to reduce and mitigate civilian casualties. These changes included:

• The use of alternate tactics, including the employment of snipers or maneuver elements instead of airstrikes when there were civilian casualty concerns
• The use of tactical patience to verify positive identification (PID) and collateral damage concerns
• Modifications in air-ground communication and procedures
• Modified TTP in counter-terrorism operations
• Increased partnering between Coalition and Afghan forces

(U//FOUO) The desired end state is a force that understands the operational environment, has the basic tool set to meet operational requirements, and can use those tools as a baseline to learn and adapt as needed to achieve the mission. The ALA study examined how lessons on critical theater issues—such as reducing and mitigating civilian casualties—were identified, passed, and implemented in the road to deployment for Afghanistan. The study identified best practices and challenges in this overall process in order to provide a basis for improvement. The next section of this paper outlines the key findings of the study, as detailed in the ALA final brief. The paper concludes with overall recommendations and detailed information to aid implementation efforts.