Joint and Coalition Operational Analysis (JCOA) Decade of War: Enduring Lessons from the Past Decade of Operations

The following document was originally obtained and published by Defense News. 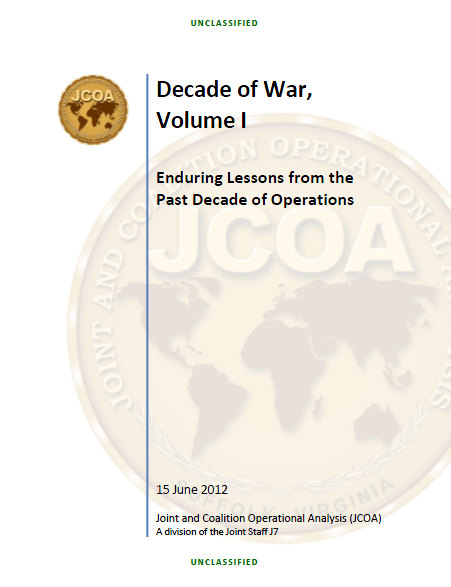 Joint and Coalition Operational Analysis (JCOA) Decade of War, Volume I: Enduring Lessons from the Past Decade of Operations

The year 2001 began with the inauguration of a United States (US) president deliberately aiming to shift the use of the military away from the numerous humanitarian and peacekeeping interventions of the 1990s toward responding to and defeating conventional threats from nation states. The mood was optimistic, with the new US national security strategy citing widespread financial prosperity and no sense of an imminent threat to the homeland. But this situation proved to be fragile: the events of a single day, September 11, altered the trajectory of the US and the way it used its military over the next decade. A national strategy that had focused on countering regional aggressors and sophisticated attacks using weapons of mass destruction (WMD) was now confronted by an enemy that attacked the homeland with low technology in asymmetric and unexpected ways—individuals armed with box-cutters using hijacked civilian aircraft.

In the decade following 9/11, it became evident that the Cold War model that had guided foreign policy for the previous 50 years no longer fit the emerging global environment. Key changes included:

In the midst of these changes, the US employed its military in a wide range of operations to address perceived threats from both nation-state and terrorist groups; to strengthen partner nation militaries; to conduct humanitarian assistance operations; and to provide defense support of civil authorities in catastrophic incidents such as Hurricane Katrina. This wide range of operations aimed to promote and protect national interests in the changing global environment.

In general, operations during the first half of the decade were often marked by numerous missteps and challenges as the US government and military applied a strategy and force suited for a different threat and environment. Operations in the second half of the decade often featured successful adaptation to overcome these challenges. From its study of these operations, JCOA identified overarching, enduring lessons for the joint force that present opportunities for the US to learn and improve, best practices that the US can sustain, and emerging risk factors that the US should address. These lessons were derived from JCOA’s 46 studies during this past decade and vetted through the Joint Staff J7-sponsored Decade of War working group in May 2012; input from working group members was consolidated into this report. This initial effort is envisioned to be the first volume in a sustained, multi-phased effort to identify critical, high-level lessons for the joint force.

The Volume I report of the Decade of War study discusses the eleven strategic themes that arose from the study of the enduring lessons and challenges of the last decade:

In this report, we briefly summarize each of these strategic themes and provide recommendations for the joint force.