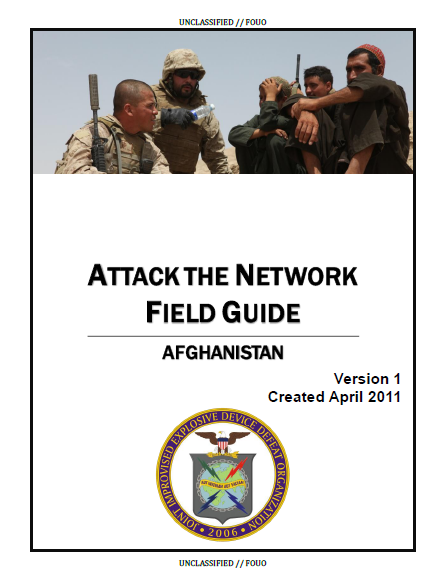 The Attack the Network (AtN) and tactical actions listed in this field guide are from interviews with battalion, company, and platoon warfighters successful in reducing the employment of improvised explosive devices (IEDs) in Afghanistan during 2007-2010. The primary intent of this field guide is to provide a collection of field-tested actions that enabled mission success in a counterinsurgency (COIN) environment with an IED threat.

Background: Recent tactical operations have US forces conducting counterinsurgency against adversaries with improvised explosive device capabilities. The best units quickly realized commonality between COIN and Counter-IED (C-IED) best practices in Afghanistan. Operating effectively along the C-IED Attack the Network line of operations led to COIN success as well as a reduction in the effectiveness of IED attacks.

Intent: This field guide provides small unit leaders and individual Soldiers and Marines a proven collection of actions to focus their efforts while attacking networks. Primarily, these actions consist of mission analysis, briefing, and execution and are adapted for use by these small unit leaders in a population-centric operating environment.

Scope: The operating environment noted here is COIN. The actions noted in this document should be coordinated with doctrine, theater guidance, and unit standard operating procedures (SOP). Attack the Network is an operational approach that consists of building and enabling friendly networks as well as countering threat networks. The development and coordination of these friendly networks might actually become the focus of main effort.

Reduce collateral damage, understand and mitigate the negative effects of your actions

When conducting kinetic actions, use the most precise weapons available to avoid civilian deaths, injuries and other collateral damage.

o Minimize collateral damage. Be prepared to make immediate reparations for collateral damage and do so as necessary.
o Treat the Afghans’ houses well – respect their property.
o Make your troops aware of cultural and religious taboos, and how violating such taboos feeds the adversary’s IO campaign. Provide your troops with a simple list of taboos that to avoid and regularly train them on these taboos.
o Be careful and use discretion when interacting with women. Afghan culture considers women as “people who belong to the home.” Men’s dominant attitude will make it hard for you to ensure female contribution.

Ask Afghans about the operations conducted by previously deployed units, and their opinions of those operations. Do not repeat mistakes. Ensure that you record all of your operations for the next turnover.

Remember that interacting with one person or group may offend another. Gain knowledge of and consider the human terrain before making alliances.

Do not increase corruption by forming alliances or otherwise empowering corrupt persons.

o Use relationships with local contacts to vet local or national security force commanders for corruption before allying with them.
o Understand that Afghans have a higher tolerance for (and a different definition of) official corruption.
o Watch for corruption by host nation military, police, or civilians and report it to trustworthy local/regional authorities.

Understand the power base in your village to focus relationship building

Build a trusted network involving personal relationships between Coalition leaders at the tactical level and the civilian and host nation leaders of the population they secure.

Choose which warfighters interact with the locals based on aptitude and abilities.

o Remember which of your troops interacted best with Afghan role players during pre-deployment training. Put them out front and put those that interacted poorly in physical security roles.
o Identify the former farmers, craftsmen, and tradesmen among your troops and leverage their knowledge when dealing with Afghan farmers, craftsmen, and tradesmen.
o Have someone in your unit create a relationship with every key member of the local Shura.

Determine who has influence in the area, and understand the traditional and current roles they now play in Afghan societies.

o A local mullah, malik, or khan.
o A village elder who has lived within the same 15 kilometers of his house for 60 years.
o An insurgent leader whom the people know will send his subordinates into the village at night to kill them if they do not cooperate.
o A local police chief who is respected for the performance of his duties.
o A local doctor who is constantly treating people.
o A respected Mujahedin warrior who fought the Soviets.
o The local who controls the water distribution.

Conduct Key Leader Engagements (KLE) to build relationships with people and entities of influence in your village. The KLE fosters and expands effective communications and cooperation between Coalition forces and local Afghans. Night KLEs are an effective way to talk privately and anonymously with a key leader, and should be arranged in advance so the person knows you are coming. If you live in the village, it is easy to conduct a night KLE unnoticed. The KLE is a cyclic process with 7 steps:

Conduct activities to address the needs of the local power base

Consider the possible unintended consequences of your actions before engaging the local leaders. Does support for one person or group, marginalize another and drive them to the adversary? Be seen as impartial until you are certain of the situation.

Establish combat outposts near local power brokers and initiate patrols with the locals under legitimate GIRoA authority/influence.
Give the Afghan people a reason to support their government, the ANSF and us.

Protect the Afghan people. Do whatever you can to prevent Afghan civilian casualties of any type, from any source.

o Take ownership over knowing and protecting the local populace, as the police would do in the US.
o Not all locals are guilty! You must protect the people and leverage them in finding the guilty ones.

Provide medical aid to locals through tailgate or pre-planned Medical Civic Action Programs (MEDCAPs) or Veterinary Civil Action Programs (VETCAPs). Some locals will only approach US warfighters during a medical emergency. While treating them or their family member, ask them about their home and other aspects of their daily life to begin building a relationship. To the maximum extent possible, local medical aid should be delivered through the local medical providers in order to manage long-term expectations of GIRoA medical care.

Live and train with your ANSF counterparts, incorporating them directly into your formations. Only linking up for operations is not good enough.

o Act in accordance with US military professionalism.
o Learn when to remove body armor.
o Do not automatically jump to using direct fire that may kill innocent civilians; instead close on the adversary with the weapons, tactics and leadership possessed by your unit or by the ANSF unit you are partnered with.
o Provide security at day and night. The populace will appreciate the security you provide. In some cases, attacks may lessen because the elders will not allow them in that area.

o Reward bravery through GIRoA when opportunities allow.
o Create an award and award ceremony to reward ANA/ANSF bravery, such as a “Certificate of Accommodation” to Afghan individuals/units assigned to work with Coalition units. One local Afghan Commander has a 1-inch binder, of which he is quite proud: It is full of paper certificates of recognition signed by previous US Commanders.

Collect on the Human Terrain

Gather and record data on individuals’ relationships to each other and to the adversary networks
Refine intelligence collection from the bottom-up by soliciting input from subordinate units to validate, invalidate, or refine the intelligence picture created.

When questioning Afghans, never use the term “Taliban” in reference to the adversary. The term holds admirable connotations to the Afghan people as its true meaning, “Student of Religion.”

Take a camera everywhere you go. With their permission, take pictures of everyone and build this information into a local ‘phonebook.’ Play into their bias of you being a dumb American who knows nothing: ask everything about people. Have a process for downloading the photos every day, and capturing names and other information associated with the person. Create relevant intelligence questions for your troops to ask tomorrow about specific people. Share important information on who’s who (elders, suspected adversary, criminals, friends, etc.).

o Always ask village elders for permission to take pictures and record information in the village. Explain why (so that they can be identified by name and to help build better relationship between the village and the unit). Most village elders will allow this to prove they have nothing to hide.
o Collect a photo, name, friends’ names, brother’s name, etc. for every house in your village. For every person who lives there, take biometrics. Eventually you will have 4,000 pictures of locals that you can use to stimulate dialogues. (“Please tell me about him.”)
When conducting tactical questioning, ask Afghans questions in indirect ways:
o Example: To find the location of fuel stores that could be used for IEDs, ask about how the crops are doing, where they are getting supplies from, and do they have enough fuel for that, etc.; instead of asking the question directly.
o Example: When lights are on in a house at night, check it out. One squad found a wedding celebration. They stayed and built relationships that later led to good intelligence.
o Example: Do not ask, “Who are the adversaries?” They will not say, but they will see increased vehicle traffic, strangers, operations, and hear about injured people. If you gain their trust, ask about new people coming into the area, or ask how and where their child was hurt. Indirectly, they can tell you who is causing harm in the area.