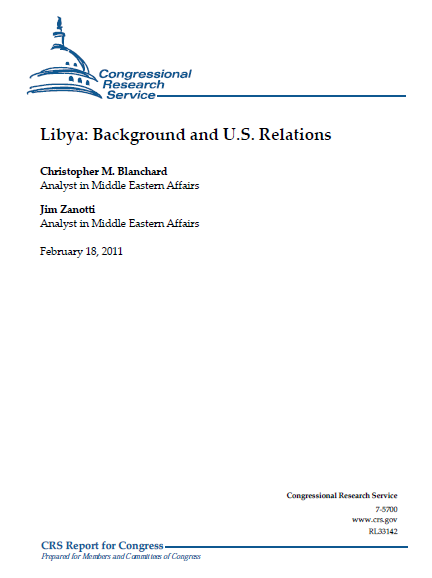 Major anti-government protests broke out in Libya on February 15 and have since intensified, eliciting violent government responses. The demonstrations are in opposition to the 42-year regime of Libya’s leader, Muammar al Qadhafi. As of February 18, some sources have reported that opposition forces have taken over areas of Benghazi, Libya’s second-largest city, and its surroundings in Libya’s northeastern Mediterranean region of Cyrenaica.

Libyan-U.S. rapprochement has unfolded gradually since 2003, when the Libyan government
accepted responsibility for the actions of its personnel in regard to the 1988 bombing of Pan Am
Flight 103 and announced its decision to eliminate its weapons of mass destruction and longrange
missile programs. In response, U.S. sanctions were gradually removed, and, on May 15,
2006, the Bush Administration announced its intention to restore full diplomatic relations with
Libya and to rescind Libya’s listing as a state sponsor of terrorism. Full diplomatic relations were
restored on May 31, 2006. Libya was removed from the lists of state sponsors of terrorism and
states not fully cooperating with U.S. counterterrorism efforts in June 2006.

Until late 2008, U.S.-Libyan reengagement was hindered by lingering disagreements over
outstanding legal claims related to U.S. citizens killed or injured in past Libyan-sponsored or –
supported terrorist attacks. From 2004 onward, Bush Administration officials argued that broader
normalization of U.S.-Libyan relations would provide opportunities for the United States to
address specific issues of concern to Congress, including the outstanding legal claims, political
and economic reform, the development of Libyan energy resources, and human rights. However,
some Members of Congress took steps to limit U.S.-Libyan re-engagement as a means of
encouraging the Libyan government to settle outstanding terrorism cases in good faith prior to
further normalization.

Under the terms of a Claims Settlement Agreement reached between the Libyan and U.S.
governments in August 2008, funds are now available to settle specific outstanding legal claims.
Congress supported the final stages of U.S.-Libyan negotiation on the agreement by passing S.
3370, the Libyan Claims Resolution Act (P.L. 110-301), which authorized the creation of an
entity with legal immunity to receive settlement funds from Libya or other sources and to
distribute them to U.S. plaintiffs. On October 31, 2008, President Bush signed Executive Order
13477 stating that claims covered by the agreement were settled.

Current U.S. policy concerns, in addition to those linked with the ongoing unrest, include
ensuring Libya’s positive contribution to the security and economic prosperity of North Africa
and the Sahel, securing commercial opportunities in Libya for U.S. firms, and addressing
persistent human rights issues. The Obama Administration is requesting $875,000 in FY2011
foreign assistance funding for Libya programs. This report provides background information on
Libya and U.S.-Libyan relations; discusses Libya’s political and economic reform efforts; and
reviews current issues of potential congressional interest.