Library of Congress Analysis of Military Support to Civil Authorities

The following analysis of statutes, documents and regulations relating to DoD support to civil authorities was prepared by the Federal Research Division of the Library of Congress for the Commission on the National Guard and Reserves. 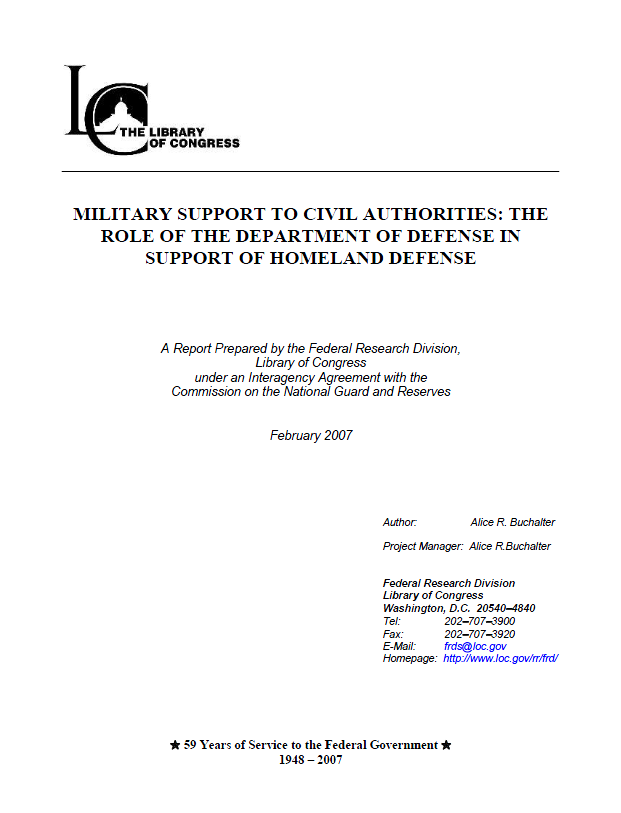 MILITARY SUPPORT TO CIVIL AUTHORITIES: THE ROLE OF THE DEPARTMENT OF DEFENSE IN SUPPORT OF HOMELAND DEFENSE

This report sets forth the statutes, Executive Branch documents, regulations, and Department of Defense (DoD) internal directives that define and govern Military Support to Civil Authorities (MSCA). The policies and responsibilities of the military departments and staff agencies of DoD are reviewed, as they have evolved from the early 1950s to the present. The events of September 11, 2001, have placed the MSCA function in the larger context of homeland security, and documents setting forth homeland security policy as it defines MSCA have been reviewed as well. This report also discusses DoD civilian and military responsibility for MSCA, and the states’ position regarding the National Guard’s role in support of civil authorities. Finally, this report evaluates the criteria for providing MSCA, and assesses how DoD compares this function with its warfighting mission.

The U.S. military has provided support to civil authorities in response to civil emergencies and natural disasters dating back to the Truman era. The terminology applied to this function has varied over the years: military assistance, or military support to civil authorities; military support of civil defense; and employment of military resources in natural disaster emergencies within the United States. As will be illustrated in this report’s discussion of U.S. Defense Department (DoD) regulatory documents, the specific responsibilities of the department and the service branches were initially divided between civil defense (attacks on the United States) and disaster-related civil emergencies, but now are addressed collectively as Military Support to Civil Authorities (MSCA) as a matter of departmental policy and doctrine. In addition, the events of September 11, 2001, and the subsequent creation of a homeland security infrastructure have resulted in the adoption of MSCA policy in the context of the broader issue of homeland defense. However, both the core regulations and the DoD internal directive that govern MSCA predate the post–9/11 world, because they were adopted in 1993. In addition, the primary statutory authority for these documents is the Federal Civil Defense Act of 1950, which was repealed in 1994. Consequently, all of the recent policy statements defining MSCA and establishing DoD’s role are found in homeland security directives and strategy documents issued by the White House and the military.

The U.S. Department of Defense, in its 2005 Strategy for Homeland Defense and Civil Support, defines defense support of civil authorities as “DoD support, including Federal military forces, the Department’s career civilian and contractor personnel, and DoD agency and component assets, for domestic emergencies and for designated law enforcement and other activities.” This function is provided when DoD is directed to do so by the president or the secretary of defense. A report on the future of the National Guard and Reserves issued in 2006 defines “civil support” as “an umbrella term that encompasses the support the Department of Defense could provide as part of a response to a natural disaster or terrorist attack, to include an event involving chemical, biological, nuclear, radiological, or explosive materials (CBRNE), as well as support DoD could provide for other law enforcement activities.” DoD’s Homeland Security doctrine issued by the Joint Chiefs of Staff in August 2005 states “MSCA is the most widely recognized form of DOD Civil Support because it usually consists of support for high-profile emergencies such as natural or manmade disasters that often invoke Presidential or state emergency/disaster declarations. DOD assistance should be requested by an LFA (Lead Federal Agency) only when other local, state and federal capabilities have been exhausted or when a military-unique capability is required.” MSCA is generally provided during natural disasters, special security events, and accidental or intentional manmade disasters that have evoked a presidential or state emergency declaration. Major Robert Preiss, a former strategic analyst in the National Guard Bureau, defined MSCA in 2003 as “assistance to civilian governmental entities – Federal, state, or local – that the services may provide to help manage a crisis, attack, or calamity.” The National Response Plan issued by the Department of Homeland Security in December 2004, which is discussed in greater detail in a separate section of this report, also stipulates that DoD civil support is generally provided only when local, state and other federal resources are “overwhelmed.”

The National Guard is considered a unique state-based military force (although primarily funded by the federal government and trained in accordance with federal standards) that is the “only military force shared by the states and the federal government.” According to National Guard Bureau Chief H. Steven Blum, the Guard’s “unique ability to work in three legal statuses makes the Guard the most versatile DOD force available to the Federal Government for homeland security (HLS), homeland defense (HD), and military assistance to civil authorities (MACA).”8 The three statuses Lt. General Blum refers to are:

DoD Directive No. 3025.1 was first issued on January 24, 1952 as Directive No. 200.04– 1 pursuant to Pub. L. No. 81–920, the Federal Civil Defense Act of 1950. Its purpose was “to establish the responsibilities of the military departments and staff agencies of the Department of Defense for planning and preparations in certain areas of civil defense and related matters.” This directive enumerated the responsibilities of the Departments of the Army, Navy, Air Force, Munitions Board, the Research and Development Board, and Joint Chiefs of Staff (JCS). Each service branch was tasked with the development of civil defense programs and policies specific to its operations, and instructed to coordinate with other service branches as well as with the Federal Civil Defense Administration (FCDA), which was authorized by statute to prepare national plans and programs for the civil defense of the United States and delegate civil defense responsibilities to federal departments and agencies. The JCS was given the task of reviewing and coordinating service branch civil defense programs, as well as providing guidance to the FCDA as to “areas which, because of their high importance from the military viewpoint, are considered probable targets for some form of enemy attack and should be given appropriate attention in civil defense planning.” In addition, pursuant to Section 302, Pub.L.No. 81–920, during a time of declared civil defense emergency, the Joint Chiefs are directed to formulate DoD recommendations regarding the department’s military requirements.

DoD Directive No. 3025.1, issued January 15, 1993, consolidates the policies and responsibilities contained in all previous directives that addressed both disaster-related civil emergencies and attacks on the United States. It creates a “single system for Military Support to Civil Authorities (MSCA) by which DoD components will plan for and respond to requests from civil government agencies” in times of major disasters or emergencies. The authorities for this directive are the Stafford Act (42 U.S.C. 5121 et seq) and the Federal Civil Defense Act of 1950, Pub.L.No. 81–920 (which was repealed in 1994).

In accordance with Pub.L.No. 81–920, a national civil defense policy is mandated, under which the “Department of Defense will support civil authorities in civil defense, to include facilitating the use of the National Guard in each State for response in both peacetime disasters and national security emergencies.” The secretary of the army is again designated as the DoD executive agent, in which capacity he develops planning guidance, plans, and procedures for MSCA; tasks DoD components to plan for and commit DoD resources in response to requests from civil authorities; provides guidance (developed with the Joint Chiefs of Staff) to the commanders of the unified and specified commands for MSCA response; and coordinates MSCA plans and procedures with the Federal Emergency Management Administration (FEMA).

The directive establishes, as MSCA policy, that DoD planning is to recognize the following with regard to Army and Air National Guard forces:

• These forces when not in federal service have primary responsibility for providing military assistance to state and local government agencies in civil emergencies.
• Plans and preparedness measures for MSCA must foster close and continuous coordination for efficient employment of DoD resources of the National Guard (under either state or federal authority), as well as resources of the DoD components, in time of peace, war, or transition to war.
• The DoD Components shall augment staffs responsible for MSCA, as appropriate, with personnel from reserve components of all military services who are specifically trained for civil-military planning and emergency liaison duties.
• Military forces employed in MSCA activities shall remain under military command and control of the DoD Executive Agent at all times.